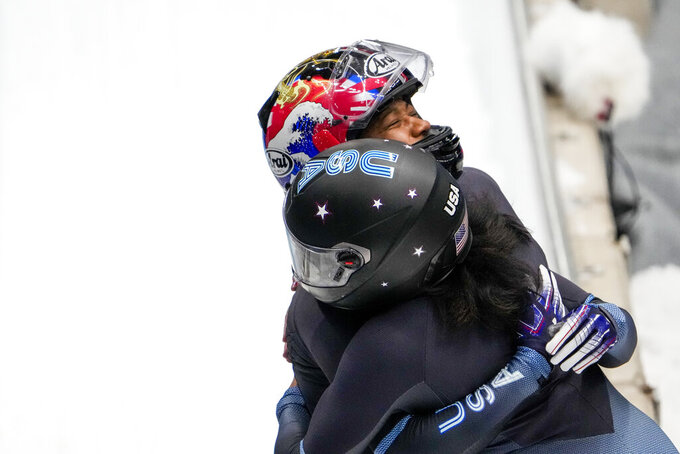 Elana Meyers Taylor and Sylvia Hoffman, of the United States, celebrate winning the bronze medal in the women's bobsleigh at the 2022 Winter Olympics, Saturday, Feb. 19, 2022, in the Yanqing district of Beijing. (AP Photo/Pavel Golovkin)

The German sliding domination of the Beijing Games continued Saturday, with Nolte driving to gold and Jamanka winning the silver in the women’s bobsled competition — and Meyers Taylor, in possibly her last race, grabbed the bronze for the fifth medal of her Olympic career.

“That is overwhelming," Meyers Taylor said. “It's so crazy to hear that stat and know that I'm part of a legacy that's bigger than me."

Nolte and Deborah Levi won with ease, finishing four runs in 4 minutes, 3.96 seconds. Jamanka, the 2018 Olympic champion, and Alexandra Burghardt were second in 4:04.73. Meyers Taylor and Olympic rookie Sylvia Hoffman were third in 4:05.48.

Gold was Meyers Taylor's dream, too.

But a fifth medal — clearly, she wasn't disappointed whatsoever.

Meyers Taylor smacked the top of her sled in celebration as she crossed the line knowing that the medal was clinched, hopped out and gave Hoffman a hug before throwing her fists into the air.

Germany’s Kim Kalicki moved up to fourth in 4:06.28, Canada's Christine de Bruin was fifth in 4:06.37, Switzerland's Melanie Hasler drove to sixth in 4:06.83 and the U.S. team of monobob gold medalist Kaillie Humphries — battling a right leg injury that adversely impacted her start times — and Olympic rookie Kaysha Love fell to seventh in 4:07.04.

“It hurts, I won't lie," Humphries said. “I gave every ounce of everything I had to the last two days and it wasn't there. I'm proud of the work that we put in and what we put into it. It sucks and it's infuriating to know that it wasn't good enough, but at the end of the day, that's racing. We can't be fearful of not being the best. Both Kaysha and I had giant targets on our back coming in and I'm so proud of what we did together."

Humphries plans on missing the next one or two seasons to start a family. She insisted Saturday night that she will race at one final Olympics in 2026.

“At the end of the day, my body just gave up," Humphries said. “My calf did, anyway. And I think my mind, a little bit, too. I just hit a wall and didn't have it."

Said Love, who wants to learn to drive: “I'm so proud of us. The experience that she's given me at my first Olympic Games, it's unmatched."

Germany now has eight golds — in nine events — and 14 medals overall in the three sliding sports at the Beijing Olympics. The Germans will likely add to that on the final day in Beijing, since they have the top two sleds at the midpoint of the four-man competition that will end Sunday. They already have more golds, and more medals, in sliding events than any nation ever has at any Olympics.

What the Germans have done at these Olympics is historic.

And what Meyers Taylor has done at the last four Olympics is also historic.

She’s now one of only four bobsledders ever to compete in at least five Olympic races and medal in all of them. She became the fifth American bobsledder to win two medals in a single Olympics — pilot Stan Benham and pusher Pat Martin did it in 1952, pilot Steven Holcomb and pusher Steve Langton did it in 2014. And, thanks to women having two events at the Olympics for the first time this year, she’s going to forever be the first female bobsledder to win two medals at the same Games.

“It meant a lot to me to have her support my career goals," Hoffman said.

Meyers Taylor's totals, including her Olympic debut as a push athlete: three silvers, two bronzes. The Beijing medals were a silver behind Humphries in monobob, and now this bronze.

“She’s already a legend in the sport,” U.S. men’s push athlete Carlo Valdes said. “Another medal just adds to all the accolades, really. ... She’s in a league of her own and it’s cool to watch.”

Barring some massive comeback by Hunter Church or Frank DelDuca in the four-man race that ends Sunday, USA Bobsled will end the Beijing Games with three medals. The Americans won four in bobsled at the 1932 and 2014 Games; they also won three in 1948 and 2002.

“For us to have three medals in this Olympics, that’s a grand slam considering where we're coming from with Kaillie’s citizenship and Elana having COVID two weeks ago,” U.S. bobsled coach Mike Kohn said.

Indeed, this road was far from an easy one for the Americans.

Humphries didn’t even know until December, when she obtained citizenship, that she would be able to compete in Beijing. And Meyers Taylor was in isolation when the Olympics started after testing positive for the coronavirus, meaning she had to give up her role as one of the two U.S. flagbearers at the opening ceremony.

She’ll carry the U.S. flag into the closing ceremony on Sunday. After two weeks of driving fast, a nice slow walk might be the perfect way to transition into whatever comes next.