Never any doubt: Cambage all-in for Australia at Tokyo Games 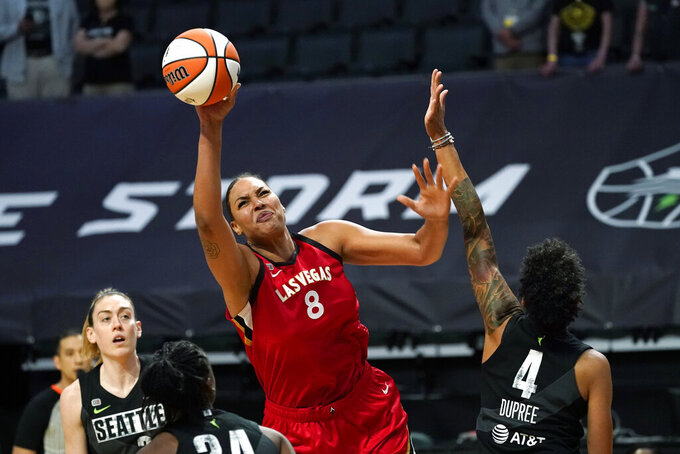 Las Vegas Aces' Liz Cambage (8) tries to get a shot off as Seattle Storm's Candice Dupree (4) defends in the first half of a WNBA basketball game Saturday, May 15, 2021, in Everett, Wash. (AP Photo/Elaine Thompson)

BRISBANE, Australia (AP) — In the end, there appeared to be never any doubt WNBA star Liz Cambage would suit up for her third Olympics for Australia.

Cambage was included Wednesday in the 12-women Opals team for the Tokyo Games, ending an earlier saga in which she first threatened to boycott the games but later changed her mind.

The Tokyo Olympics, already delayed a year because of the COVID-19 pandemic, are scheduled to open July 23.

Earlier this month, Cambage criticized promotional photos of Australian Olympians and Paralympians as “whitewashed” and said there was a lack of diversity in Australian media. The photos contained mostly white athletes.

Cambage, 29, was born in London, England to a Nigerian father and Australian mother. She moved with her mother to Australia at a young age.

In a series of social media posts, Cambage criticized two photos — one from the team's official underwear supplier, and another from the Australian Olympic team. The underwear advertisement featured athletes from the Olympics and Paralympics.

“If I’ve said it once I’ve said it a million times. HOW AM I MEANT TO REPRESENT A COUNTRY THAT DOESN’T EVEN REPRESENT ME. #whitewashedaustralia,” Cambage wrote. “Until I see y’all doin more @ausolympicteam imma sit this one out.”

A week later, she changed her mind.

“For everyone wondering so desperately what my decision is for the Opals, I’m in baby . . . I’m in,” she posted.

Four-time Olympian Sandy Brondello, who will lead the Opals into her first Olympics as head coach, said Cambage was never hesitant to come on board for Tokyo.

“It was a very quick yes, I do want to play,” Brondello said. “There was never any pressure, I’m not going to force anybody to play for her country. She loves the Opals, these are all her sisters . . . she’s super motivated and ready to win that gold."

Appearing to refer to Cambage's social media posts — she's also had celebrated Twitter run-ins with former No. 1 NBA draft pick and fellow Australian Andrew Bogut, Brondello said: “Liz is passionate about a lot of things off the court and we totally support that.”

Cambage was also in the news this past weekend after Connecticut Sun coach Curt Miller was fined $10,000 and suspended a game by the WNBA for making a disparaging remark about the veteran Australian center to a referee on Sunday.

In a social media post following the Aces’ 72-65 loss to the Sun on Sunday, Cambage said Miller showed a lack of respect. The coach, while arguing whether a call should have gone the Sun’s way, told the official Cambage weighed 300 pounds (138 kilograms).

Miller issued a statement Monday apologizing to Cambage and the Aces and later re-iterated his apology.

“As a leader, words matter. It was inappropriate,” he said. “In a league where we empower women, and I’ve spent 31 years empowering women, (those words were) just not acceptable.”

Brondello said she has a balanced squad for Japan.

“Every selection process is a difficult one as we have so many quality players in our squad but I feel . . . that will be able to adapt to any style of play we will confront in Tokyo,” Brondello said on a conference call from Phoenix, Arizona, where she coaches the WNBA's Mercury.

“We have good size, speed, toughness, versatility and experience which will all be required in a high-pressure situation as the Olympics."

Australia has three silver medals at the Olympics — losing to the United States in the final at Sydney in 2000, Athens in 2004 and Beijing in 2008. The Opals won bronze medals at Atlanta in 1996 and London in 2012 but lost in the quarterfinals at Rio in 2016.