Ode to Sports: A year when games and fans came off the bench 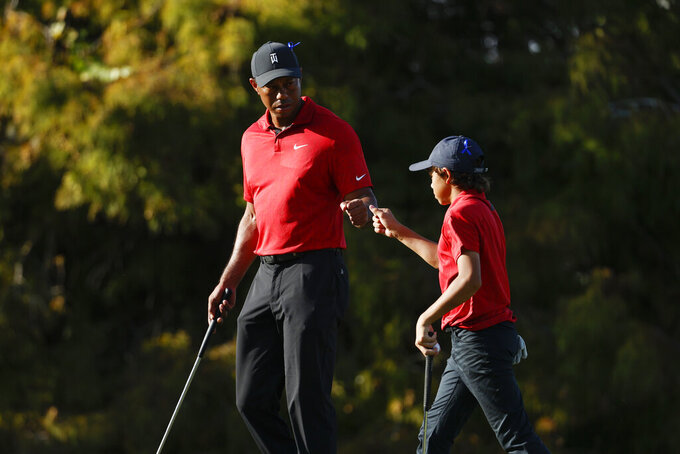 Tiger Woods fist bumps his son Charlie Woods on the 16th green during the second round of the PNC Championship golf tournament, Sunday, Dec. 19, 2021, in Orlando, Fla. (AP Photo/Scott Audette)

Fans back in the stands and games back in play.

Some shots from the arc, some for the vaccine.

A year on the rebound crisscrossing sports.

A year next to normal, progress of sorts.

The Heat and Celtics take a knee.

New New York star, good as it gets --

A limb falls from the Dodger tree --

Tide surges in a dull affair

To send Nick Saban past the Bear.

As Henry Aaron passes by.

A shutout vote for baseball’s Hall,

Though Schilling nearly gets a call.

And stay at home for Super Bowl.

And Brady gets his seventh ring.

Prep for Tokyo goes off the track,

A boxing marvel pound for pound,

Marvin Hagler goes one last round.

March Madness not the same event,

The games now played in one big tent.

But NCAA proves all thumbs --

Now passes into that good night.

NFL adds one game to sked.

Smell of money goes to its head.

Opening day but no at-bats

When COVID scraps the Mets at Nats.

With Georgia’s voting law to blame.

Gonzaga gasps, comes up for air

Are now served up most every day.

And Churchill Downs kicks Baffert out.

Happy birthday! Let it be sung:

No Baffert, here’s how Preakness goes:

At Cowboys’ home with record crowd.

Even if COVID’s running free.

Oh, he believes in yesterday.

As Lefty, Koepka walk toward green.

Castroneves still gets it done

And speaks of pain that no one knows,

The mental anguish she can’t shake --

A COVID test then knocks him out.

No test or virus undermines

Can college athletes play for pay?

Cracks down on pitchers’ sticky stuff.

What to do with Trevor Bauer?

Again, the Lightning win it all.

No Stanley Cup for Montreal.

No roaring crowds; in fact, no fans.

Raise a glass, a dry martini --

The All-Star Game his habitat.

Morikawa, his game’s got clout,

Their crown last won when with Kareem.

In Cleveland, after hot debate,

The Guardians step to the plate.

At last, the Tokyo Games begin

Much to the public’s great chagrin.

Before near empty, ghostlike stands.

Her tribulations and her trials,

Not least the “twisties,” so we learned,

Where up from down can’t be discerned.

Caeleb Dressel, his haul of gold;

And fatten the fat SEC.

Westbrook’s home with James in LA.

Jays regain a sense of order,

Flocking home north of the border.

Baseball goes to where myths are born:

“Field of Dreams,” with plenty of corn.

Toward run to lead the Philippines.

Novak looks to stand with Laver.

His final, though, best to forget.

Philly longs for an elixir

Brady’s back at his old domain.

At every turn a landmark race.

A trilogy ends. Close the book.

And barred from games in NYC.

Lost in the muck most of the year,

Braves ascend to another sphere.

Kyle Larson, once without a car,

An MVP, ain’t that the truth,

Staples Center stripped of its name --

Why are Kelly, Notre Dame through?

Time’s up for baseball’s CBA,

A sport shuts down in no-man’s land.

As do Michigan, Georgia, Tide.

A long wait ends with much acclaim --

Death on a California track:

Beijing under a microscope.

We will not send our diplomats!

Basketball stands on guard with thee:

Stephen Curry, king of the 3.

Team and coach a dumpster fire,

Jags get rid of Urban Meyer.

Now, with caution, we eye the door.

(New Year’s protocol, after all),

Eyes ahead and the mandate clear:

Better things for a better year.