Oh, no: A short track shutout for US at Beijing Olympics 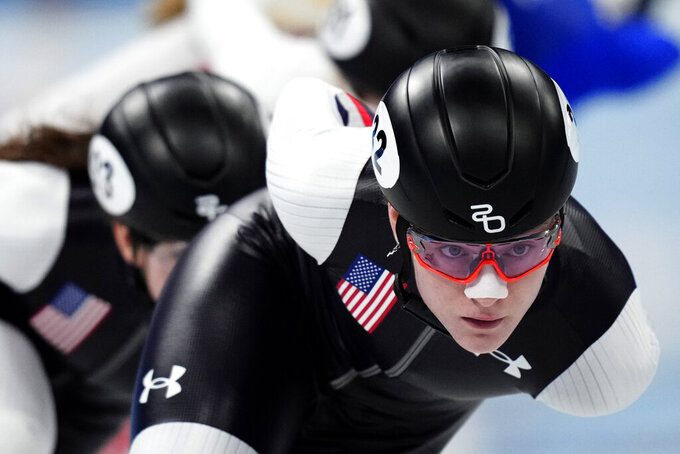 Corinne Stoddard of the United States, races in her quarterfinal of the women's 1500-meters during the short track speedskating competition at the 2022 Winter Olympics, Wednesday, Feb. 16, 2022, in Beijing. (AP Photo/Bernat Armangue)

BEIJING (AP) — Oh no, it was a short track shutout for the Americans at the Beijing Olympics.

A program that has struggled to recapture the buzz and success it had when Apolo Anton Ohno was the star attraction failed to win a medal for the first time since 1998.

The blanking was complete when Kristen Santos, the team's best hope for a medal, suffered more bad fortune Wednesday and wound up only making the “B” final in the women's 1,500 meters, the final event of short track.

“Obviously, there's things out of my control that have kept me off of the podium and off of what I know I'm capable of," Santos said. "That's definitely disappointing. It's going to take a little time for me to totally reconcile with that."

Over six days of competition at Capital Indoor Stadium, Santos was the only American skater to even qualify for a medal final.

In the 1,000, she was in a contention for the podium when Italian star Arianna Fontana took her out.

Fontana wound up being penalized, but that didn't do Santos any good. She wound up fourth — a distant 14 seconds behind the bronze medalist in what turned out to be the best showing by an American skater in Beijing.

She advanced to the semifinals and was trying to position herself to move on to the “A” final when Hungary's Petra Jaszapati made an illegal pass on the curve, causing Japan's Sumire Kikuchi to crash.

Oh her way down, Kikuchi nudged into Santos, who stumbled and lost all momentum as the rest of the pack pulled away.

Jaszapati was DQed, but the referee — who has wide discretion — merely advanced Santos and Kikuchi to the consolation final.

That pretty much ended any hopes of coming away with a medal.

“While I'm disappointed with how the results turned out, I'm not disappointed with myself,” Santos said. “I went out there and did everything I possibly could. Unfortunately, luck was not on my side at these Games.”

This was only the second time since short track became an official Olympic sport at the 1992 Albertville Games that the Americans failed to make the podium.

It first happened at Nagano, but that setback was merely a blip. Ohno arrived on the scene four years later in Salt Lake City, giving the sport a huge boost with his dynamic performances.

He won eight medals over three Winter Games, including two golds, and helped short track become one of the biggest attractions for the American viewing audience.

Ohno retired after the 2010 Vancouver Olympics, and the U.S. team hasn't found anyone to fill that huge void.

The U.S. squad that competed in Beijing included only two men (the Americans didn't even qualify for the relay) and plenty of youth.

Five of the seven athletes were 22 or younger, including 20-year-old Corinne Stoddard, who skated most of the competition with a broken nose sustained in her very first race.

Santos was the oldest, at 27, and she's not sure if she'll be back for the 2026 Olympics. She's getting married in a few months and said she'll need some time to decide whether to carry on for another four years.

No matter what, she's confident the Americans won't suffer another shutout at Milan.

“I think that we will definitely be on the podium in four years,” Santos said. “Every single person here on our team has shown that we're capable of that."