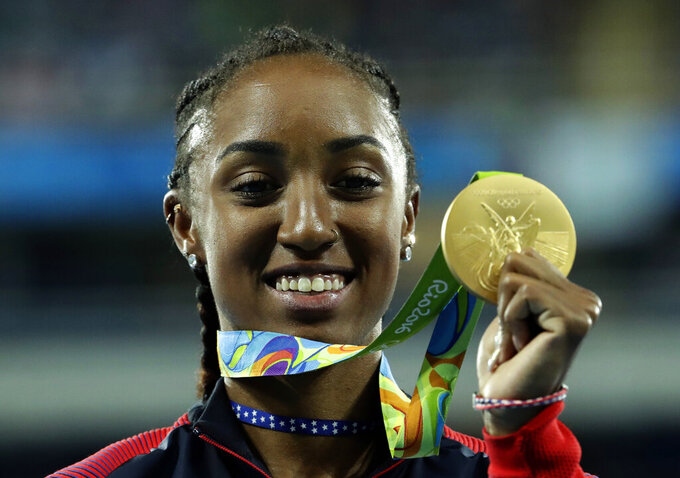 FILE - In this Thursday, Aug. 18, 2016 file photo, Gold medal winner Brianna Rollins from the United States shows off her medal during the medal ceremony for the women's 100-meter hurdles final during the athletics competitions of the 2016 Summer Olympics at the Olympic stadium in Rio de Janeiro, Brazil. Brianna Rollins-McNeal has been banned for five years in a doping case it was reported on Friday, June 4, 2021. The decision rules her out of this year's Tokyo Games and the 2024 Paris Games. The Athletics Integrity Unit says the American’s second career ban was for “tampering within the results management process” of doping control samples. The 29-year-old hurdler's ban runs to August 2024. AP Photo/Dmitri Lovetsky, File)

MONACO (AP) — Olympic hurdles champion Brianna Rollins-McNeal was banned for five years on Friday in a doping case, ruling her out of this year's Tokyo Games and the 2024 Paris Games.

The Athletics Integrity Unit said the American’s second career ban was for “tampering within the results management process” of doping control samples.

The 29-year-old hurdler’s ban runs to August 2024, days after the Paris Olympics finish.

However, Rollins-McNeal has started an appeal which could yet let her run in the 100-meter hurdles at next month's Tokyo Olympics.

The Court of Arbitration for Sport made an interim decision to freeze her ban so she can run at this month's U.S. Olympic trials, the AIU said. The full appeal will be heard before the Tokyo Olympics open on July 23.

Details of the disciplinary case were not published by the AIU, which cited confidentiality reasons. Those could be related to medical records.

Rollins-McNeal missed the 2017 season to serve a one-year ban for missing doping tests.

Her career-best time of 12.26 seconds makes her the fourth-fastest woman in history in the event. She also won the 100-meter hurdles title at the 2013 world championships in Moscow.