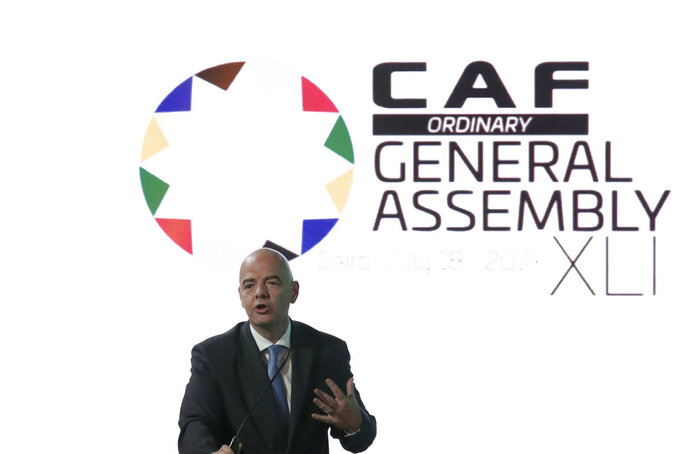 FILE - FIFA president Gianni Infantino speaks during the Confederation of African Football general assembly in Cairo, Egypt, July 18, 2019. Infantino has linked his plan for biennial World Cups to giving more hope to African people who currently risk their lives crossing the sea to Europe. Infantino's comments were in a speech to European lawmakers in Strasbourg, France on Wednesday, Jan. 26, 2022. (AP Photo/Hassan Ammar, file)

BEIJING (AP) — FIFA’s fading plan for biennial World Cups was labeled a threat from soccer to all other sports by the International Olympic Committee on Thursday.

IOC President Thomas Bach chided FIFA counterpart Gianni Infantino, an IOC member for the past two years, for not being in Beijing to hear the criticism.

“We all would have very much liked to discuss the FIFA proposal for a biennial World Cup together with the FIFA president and IOC member,” Bach told about 100 colleagues at the traditional pre-Olympic meeting, with some there in person and others viewing remotely.

Bach added, in a break from the usual politeness of IOC gatherings, that talking to Infantino directly “is not possible against the expectations because he canceled his visit to Beijing the day before yesterday.”

Infantino was expected to be watching remotely from Cameroon after telling the IOC he would attend the final stages of the African Cup of Nations.

The FIFA president has been pushing a plan to stage World Cups for men and women every two years instead of four. FIFA believes the plan will accelerate development in soccer worldwide, close the gap on the European clubs and national teams that dominate competitions, and add billions of dollars in revenue it can share among its 211 national federations.

Infantino has strong support from Africa but drew criticism last week after linking the World Cup plan to giving more hope to African people who might risk death in sea crossings to Europe.

The European and South American soccer bodies have said they will boycott biennial tournaments.

Mustapha Berraf, the president of the African group of national Olympic committees, led the IOC’s opposition on Thursday, saying biennial World Cups would have a “heavy impact” on his continent.

“The plan promoted by FIFA as we speak would create immeasurable damage and put in danger sport in general,” Berraf said.

“There comes a point where the athletes have to say: ‘Stop,’” Ryu said.

After four interventions from IOC members, Bach asked for and was given applause to convey the feeling of the room back to Infantino.

Infantino previously faced criticism from sports leaders when Bach and the IOC hosted an online meeting in December.

Momentum for FIFA’s plan stalled after European and South American officials voiced their concern. Infantino then pulled plans for an expected vote on the issue in December.