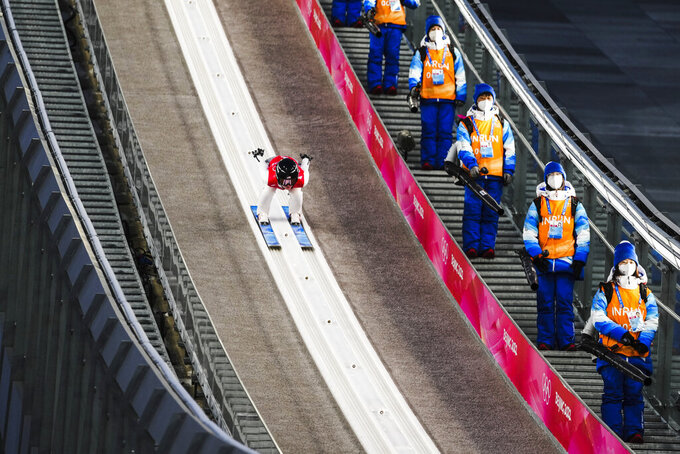 Anna Hoffmann, of the United States, speeds down the hill during the women's normal hill official training session at the 2022 Winter Olympics, Thursday, Feb. 3, 2022, in Zhangjiakou, China. (AP Photo/Matthias Schrader)

ZHANGJIAKOU, China (AP) — Anna Hoffmann sat on a metal bar perched about as high as a 40-story building, rolled her shoulders back, took a deep breath and exhaled.

The American ski jumper left the safe place, went down the in-run and took flight the length of an football field with her bib flapping in the wind before landing smoothly in the machine-made snow.

What would frighten almost anyone outside of the sport, Hoffmann handled with poise as she prepared to compete Saturday in the Olympics for the first time at the Beijing Games.

“I'm just trying to have some fun and relax," the 21-year-old Hoffman, who is from Madison, Wisconsin, said after a training session in China. “When I am on the bar, I just remind myself that I love this sport."

The women and men who fearlessly fly through the air in ski jumping are not old enough to remember seeing Vinko Bogataj’s wipeout, used in conjunction with “the agony of defeat,” in the opening montage of “ABC’s Wide World of Sports,” 50 years ago.

More recently, former Olympian Nick Fairall was left paralyzed with a spinal cord injury and modern-day ski jumpers probably remember the crash or have seen it on YouTube.

And yet, brave athletes around the world go head first down a steep incline as fast as 100 kph (62 mph) and essentially ski off a cliff for the thrill of a potential victory.

“A lot of people think ski jumpers are crazy, but that’s not the case," said Logan Sankey, who finished just behind Hoffmann at U.S. trials. “Fear definitely plays a role and it’s a challenge to overcome. I’m still working on it."

USA Nordic is trying to help her and other Olympic hopefuls and Olympians in ski jumping and Nordic combined with their mental performance. When five-time Olympian Billy Demong began leading the organization as its executive director in 2016, one of his first moves was to hire sports psychologist Nicole Detling.

Detling works individually with USA Nordic athletes, helping them overcome mental obstacles in the way of their success with unique strategies that fit each of them.

“One of the things that we’ll use with some of the athletes is what I call deliberate distraction," Detling said. “If you're thinking about your fingers while you’re visually looking at your fingers, you’re not thinking, `Oh my gosh, I have to go really far on this jump.’ Or, `I’m really afraid.’ Or, `It’s too windy.’ Or, things that might mess you up and make you afraid.

“It’s a way to get their head out of the negative, into something that’s a little bit more neutral and there’s no emotional component associated."

Ski jumping certainly isn't the only sport in which women and men throw caution to the wind as they risk getting seriously injured.

Alpine skiing, for example, can be very dangerous because of the breakneck speeds, steep inclines and sharp angles. Even Nordic skiing and biathlon have become dangerous in part because of the machine-made snow.

Demong insisted ski jumping is a relatively safe sport while acknowledging serious injuries have and will happen. And when they do, it can affect the psyche of any woman or man and the key for them is to bounce back to get back on the hill.

“It is a totally a house of cards sometimes," Demong said. “I use the golf analogy. When you take your brain out of the equation and just swing, it’s good. The second you hit one wrong and you start to overthink, it all goes sideways.

“The only difference in ski jumping is, you’re the ball and the repercussions are hard."

Fairall, who is from New London, New Hampshire, found that out in 2015. Fairall's skis got stuck in sticky snow on a landing in Austria, catapulting him forward with such force that he broke his lower back and it left him in a wheelchair.

“I lost a lot of credibility about how safe this sport is since my accident," Fairall said in November, when U.S. ski jumpers and Nordic combined athletes were training in Lake Placid, New York. “This sport is actually very, very safe. Mine was just a freak accident. All these things lined up in a certain way that I ended up breaking my spine. I was one very few that had a very serious accident.

“This sport seems extremely dangerous, but you have to realize the physics with it. You're jumping with the hill and most of your impact and the momentum goes with it. If something goes wrong, it's not as catastrophic as people might think it is."