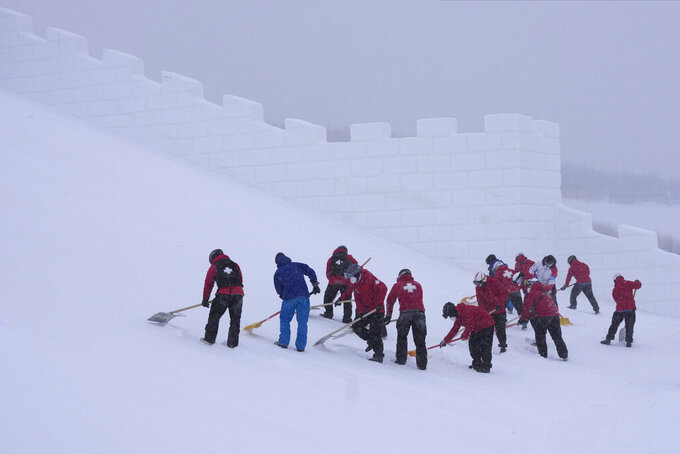 Volunteers clear the course as the start of the women's slopestyle qualification has been delayed due to a weather consition at the 2022 Winter Olympics, Sunday, Feb. 13, 2022, in Zhangjiakou, China. (AP Photo/Francisco Seco)

ZHANGJIAKOU, China (AP) — Freestyle skier Eileen Gu's quest for a second gold medal at the Beijing Games ran into a slight detour when gusty wind and snow postponed the qualifying round for women's slopestyle on Sunday.

Qualifying will now take place Monday and the final the following day. The switch avoids putting the gold-medal round directly against the Super Bowl, which is being televised on the Olympic network, NBC.

In addition, the men’s slopestyle qualification has switched from Monday to Tuesday. That final will now be Wednesday.

Gu, who was born and raised in the United States, has become an even bigger star in China, the country where her mother is from and that the 18-year-old from San Francisco chose to represent. Gu won gold in big air last Tuesday.

Already at the top of the hill, Gu was stretching and getting ready for some warmup runs in the blustery conditions when qualifying was postponed. The snow was blowing sideways and the flags on the bottom of the course were whipping in all directions. The visibility also was low, which makes landing jumps off the massive kickers along the course a dangerous proposition.

Gu's victory in big air sparked such a celebration that Sina Weibo, the massive social network that is similar to Twitter, found its servers temporarily overloaded, according to Chinese media.