As Olympics near, Warriors' Brown eager for Nigerian chance 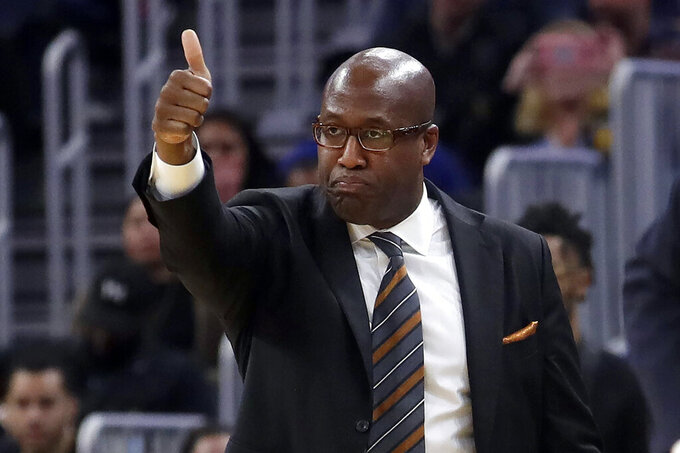 FILE - In this Nov. 4, 2019, file photo, Golden State Warriors assistant coach Mike Brown gestures during an NBA basketball game against the Portland Trail Blazers in San Francisco. Brown is the coach of the Nigerian men’s Olympic basketball team this summer, and that team starts preparations for the Tokyo Games with training camp beginning this weekend in Oakland, Calif. (AP Photo/Jeff Chiu, File)

There was a small hurdle that officials from the Nigerian basketball federation had to clear before they could even talk to Golden State Warriors assistant coach Mike Brown about becoming their men’s national coach.

They needed his phone number.

Nobody involved with the federation had it, so they started calling around and eventually word got to Brown they were seeking him out. Brown originally thought he had no interest, then — once they got the number — wound up taking the call and listening to their vision.

“A chance to coach in the Olympics,” Brown said, “made me think about it.”

That chance has arrived.

Brown will lead the Nigerians into the start of their Olympic tryout camp in Oakland, California, this weekend, expecting to start with about 35 players who hail mostly from the collegiate, G League and international ranks. That group will get pared down to 12 later this month, when another dozen or so players — most with NBA experience — will join the mix for a second round of selections before Brown and the Nigerians choose the final roster for the Tokyo Games.

Nigeria qualified for the Olympics by being the top African nation at the 2019 Basketball World Cup in China. Brown — who sought the opinions of Golden State coach Steve Kerr, San Antonio coach Gregg Popovich and others from USA Basketball when he was deciding how to proceed with the Nigerian offer — officially got hired about four months after the World Cup, and he’s spent enormous amounts of time immersing himself in the role since.

Make no mistake: These are exciting basketball times for Nigeria.

In last year’s NBA draft, six players who were either born in Nigeria or have a parent hailing from there were chosen in the first round, a first for any African nation. This year’s NBA first-round playoff series between Miami and Milwaukee featured nine players with Nigerian roots, six from the Heat, three from the Bucks. As many as three Heat players — Gabe Vincent, Precious Achiuwa and KZ Okpala — are serious candidates to play for Nigeria in these Olympics, and it's possible that most if not the entire Nigerian roster for Tokyo has NBA experience.

The Warriors will be well represented in Tokyo. Kerr is an assistant on Popovich’s USA Basketball coaching staff, and Warriors forward Draymond Green has said since 2019 that he has been hoping to play in the Tokyo Games. USA Basketball has been pursuing Golden State guard Stephen Curry as well, and some other members of the Warriors’ staff will be wearing Nigerian colors with Brown in Tokyo.

Brown has never been to Nigeria. That said, he went out of his way last fall to prove his commitment.

FIBA’s AfroBasket qualifiers — the tournament where nations try to make the African continental championship tournament, set to be played later this year — were taking place in the last week of November, just days before the Warriors were set to start training camp.

Brown flew halfway around the world to Rwanda — during a pandemic — just to coach three games and even though he would have to quarantine upon returning to San Francisco and miss a few more days of Warriors’ camp. Nigeria rolled to three easy wins, and Brown’s commitment to the job has only grown.

“I went during the pandemic to show the people of Nigeria, ‘Hey, I’m in this thing and I’m trying to help your country develop in the game of basketball and win at the highest of all levels,’” Brown said. “Doing that might have given me more credibility.”

That credibility can’t be questioned now. He’s not just coaching; Brown is immersed in several aspects of the operation, helping oversee everything from making sure practice equipment arrives to setting up travel arrangements and whatever else comes up along the way. He’s even helped set up a new charitable foundation — Friends of Nigerian Basketball — that is trying to raise $1 million to support the national team programs.

The Nigerian men have never come close to an Olympic basketball medal. They might not this summer, either. But Brown believes he’s laying the groundwork for it to happen, maybe sooner than most might think.

He particularly likes a quote from Nelson Mandela — “The world will not respect Africa until Nigeria earns that respect. The Black people of the world need Nigeria to be great as a source of pride and confidence.” — and calls it the Nigerian program’s rallying cry.

“There are Nigerians all over the world,” Brown said. “And they are a very proud people.”

He’s hoping they can particularly take pride in their basketball this summer and beyond.