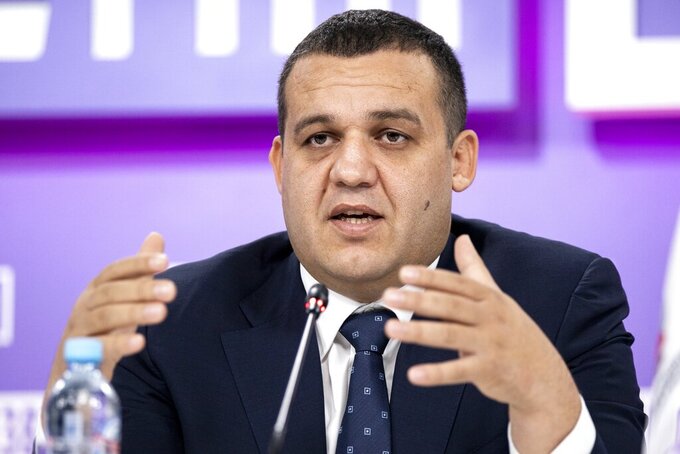 FILE - In this Tuesday, Oct. 27, 2020, file photo, Umar Kremlev, General Secretary of the Russian Boxing Federation and member of the Executive Committee of the International Boxing Association (AIBA), speaks during a news conference in Moscow, Russia. The boundary between amateur and professional boxing has blurred further as the International Boxing Association is offering prize money of up to $100,000 for the first time at the historically amateur men’s world championships. AIBA said on Thursday, Sept. 16, 2021 a total prize fund of $2.6 million is in place to award medalists in each category. The men’s championships are in Belgrade, Serbia, from Oct. 24 through Nov. 6. (AP Photo/Alexander Zemlianichenko, File)

LAUSANNE, Switzerland (AP) — The boundary between amateur and professional boxing blurred further Thursday with the International Boxing Association offering prize money of up to $100,000 for the first time at the historically amateur men's world championships.

AIBA did not immediately respond to a question from The Associated Press about whether it plans to have prize money at the women's world championships. That event is scheduled for this year but has no listed venue or dates on AIBA's competition calendar.

“It is the first time AIBA will reward medalists of the world championships financially, and this is how it should be," AIBA president Umar Kremlev said. "This money is well-deserved taking into account the years of preparations required to earn a place at AIBA’s top tournament and the efforts made."

The move could help AIBA rally support among boxers as it tries to lift its suspension from the International Olympic Committee. The IOC has demanded reforms after questioning how AIBA was run following numerous judging disputes at past Olympics, and it blocked AIBA from having any role in organizing the tournaments at this year's Tokyo Games.

AIBA dropped the word “amateur” from its name in 2007 and held its first event with prize money the following year. It also allowed boxers to fight in some professional bouts while retaining their Olympic eligibility. Albert Batyrgaziev of Russia became the first pro boxer to win an Olympic gold medal this year.

Handing out prize money marks a shift for AIBA in another way. The embattled governing body had severe financial problems because of loans and failed attempts to muscle in on the lucrative pro boxing world by launching AIBA-branded pro competitions. Soon after Kremlev was elected AIBA president in December, he brought in Russian state gas company Gazprom as a major sponsor.