One question hung over 2008 Games: Would they change China? 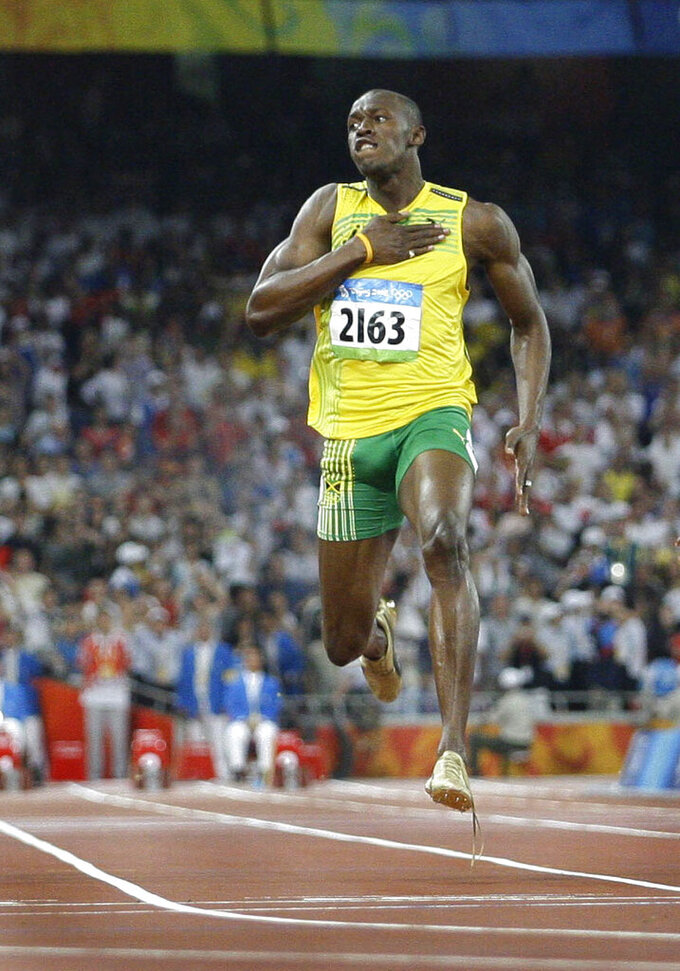 File-Usain Bolt of Jamaica, third right, reacts as he wins the men's 100-meter final with a world record in athletics competitions in the National Stadium at the Beijing 2008 Olympics in Beijing, Saturday, Aug. 16, 2008. The Olympics are remembered for the stars. That was true in Beijing in 2008, and the stars were Michael Phelps and Bolt. But Beijing is also storied for its signature venues like the “Bird's Nest” stadium, and the “Water Cube” swimming venue. No Olympics before — or since — have impacted a city the way the Olympics did Beijing. (AP Photo/Anja Niedringhaus, File)

One question loomed over the 2008 Beijing Olympics: Would the Games change China?

Richard Pound, now the senior member of the International Olympic Committee, wrote about it in his book "Inside the Olympics."

“The decision in 2001 to give the games to China was made in the hope of improvement in human rights and, indeed, the Chinese themselves said that having the games would accelerate progress in such matters," Pound wrote in 2004.

Francois Carrard, the IOC’s director general at the time, said there was “one issue on the table ... and that is human rights.”

“We sincerely and dearly hope we will see many changes,” Carrard added.

The Olympics did not change China in ways the IOC suggested, and it was naive to think they would. They failed to bring more openness and, looking back 12 years, the changes have gone in the opposite direction. Instead of the Olympics helping to transform China, China used the Olympics to alter how it was perceived on the world stage and to signal its rising power.

That point was made in the first minutes of the opening ceremony when 91,000 at the Bird's Nest Stadium were stilled on a sultry night by the thundering precision of 2,008 drummers.

China even attempted to control the weather at the Olympics with cloud seeding — another show of its ambition. It seemed to work. A few days after the games opened, the smog and soot cleared and the sun shone. It also helped that heavy industry had been closed for months and vehicles were pulled off the streets.

China won more gold medals than the United States in 2008 and spent an estimated $44 billion for well-organized but somber games. They were dubbed the “no-fun Olympics” as China's tight security snuffed out any party atmosphere, particularly compared with Sydney and Athens before it, and London after.

Sheena Greitens, who studies Asian politics at the University of Texas at Austin, said the world financial crisis that followed the Olympics by a month, and the rise of General Secretary Xi Jinping, changed China far more than Olympic spectacle. She was in Beijing at the time doing research and studying Chinese.

"The Beijing Olympics get the attention of viewers who don’t necessarily pay lots of attention to global politics and foreign policy otherwise, and that heightens the impact of hosting the Olympics on overall public attention to China,” she wrote in an email.

Hitler's 1936 Berlin Games were often likened to Beijing: an authoritarian state using sports as a stage. Politics dominated the yearslong preparations, with clashes over air pollution, internet censorship, tension over Tibet and Taiwan, and an international torch relay that was met with global anti-China protests.

International TV networks and Chinese censors quarreled up to the last minute over access to Tiananmen Square, about what images could be shown and over who could be on camera. Foreign television was restricted in its movement around the city. Protest zones were created to placate human rights advocates but remained empty and off-limits.

Authorities stage-managed everything. When daily news briefings at the main press center became contentious with reporters declining to yield microphones after questions, they were scaled back or canceled.

"Any country that hosts an event like the Olympics can use it to present the country to the world in a positive light," Greitens wrote. “Authoritarian states probably have fewer constraints in doing that than democracies, because they are less accountable to the public in organizing and spending on the event. They can also more tightly control protest and media coverage that might provide a more nuanced or alternative narrative about the host country.”

At a meeting in Beijing just four months before the Olympics opened, IOC President Jacques Rogge said the games were in "crisis" as anti-China protests in London, Paris, and San Francisco attacked legs of an international torch relay and the Olympic flame. The self-governing island of Taiwan also declined to take part in the relay, signaling its independence from China.

The IOC has not tried that type of relay since.

The protests came a month after deadly rioting in Tibet, set off by China's handling of the unrest.

A month after Rogge spoke, everything changed when an 8.0-magnitude earthquake killed at least 70,000 people in Sichuan province in the west of China. Anti-China protests stopped, sympathy poured in and the games were on their way.

“I’m sorry to say it, but this has turned things around,” Gerhard Heiberg said at the time as a member of the IOC’s executive board and its marketing director. From that point, the Olympics rode a wave of goodwill that the Chinese Communist Party's propaganda machine had failed to generate.

China controlled all it could. In his speech in English during the closing ceremony on Aug. 24, Rogge said “these were truly exceptional games.” Western reporters interpreted this as a lukewarm endorsement. Many anticipated he might call them “the greatest”or “games without equal.”

However, the translation in Chinese — prepared by the state-run Xinhua news agency — called the game “wu yu lun bi.” Roughly translated — “unparalleled” games. This was far stronger than Rogge's assessment. Communist Party officials cared what impression the games left on foreigners, but mostly they used the games to reinforce their legitimacy and one-party rule at home.

Susan Brownell, an anthropologist at the University of Missouri-St. Louis, has written extensively on China and sports in China. She was also in Beijing during the Olympics and said the China of today under Xi may have it roots in 2008.

“My own assessment is that the games succeeded in promoting an image of China as a superpower, which was regarded negatively by audiences that perceived this as a military threat and a threat to their way of life," Brownell wrote in an email.

“I would say that the organizational success of the Olympic Games and the fact that Chinese athletes won more gold medals than the Americans contributed to greater confidence, and Xi Jinping reflected that growing confidence," Brownell added. “But we should not think that confidence is boundless.”