Pau Gasol defied odds to return, is going out on his terms 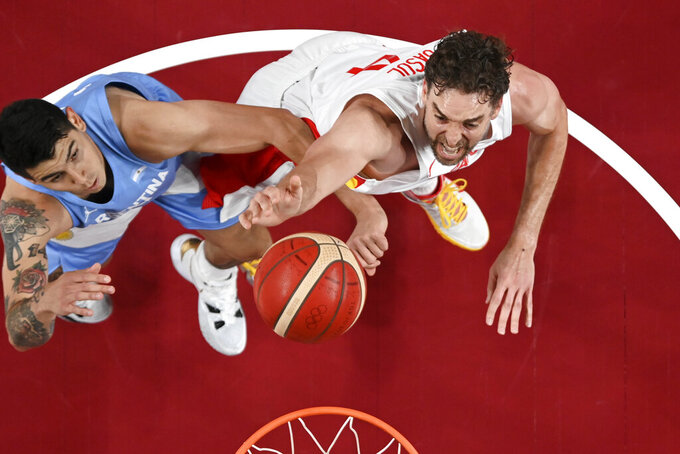 Argentina's Gabriel Deck, left, fights for a rebound with Spain's Pau Gasol during a men's basketball preliminary round game at the 2020 Summer Olympics, Thursday, July 29, 2021, in Saitama, Japan. (Aris Messinis/Pool Photo via AP)

It begs the question why he’s at the Tokyo Olympics.

The answer: The 41-year-old is going out on his terms.

A stress fracture in his left foot required surgery, derailed the end of his NBA career and had him seriously contemplating retirement until he was able to get back on the court with FC Barcelona this past season and help that club win the Spanish League title. And now, one final Olympic run.

“I love the game,” Gasol said. “I wanted to finish my career playing. I had such an incredible, extraordinary career that I didn’t want the injury to finish it for me. And it was it was a very difficult and challenging injury. So, I set myself this goal to get back on the floor and potentially play the Olympics again with my national team -- and I worked my butt off to do it.”

Spain (2-0) plays Slovenia (2-0) on Sunday for the top spot in Group C. Both teams have already clinched quarterfinal berths. Gasol is playing meaningful minutes for Spain, averaging 9.0 points and 6.0 rebounds on 62% shooting in the first two contests at the Olympics.

“I’m very happy for him,” said Marc Gasol, Pau Gasol’s younger brother and fellow NBA and Spain national team veteran. “I’m proud of him. He didn’t have to do this. He’s made everything you can do as a professional athlete. He’s a role model in every level that you can be, as a human being and as an athlete.”

These Olympics were postponed for a year because of the pandemic, and virus-related issues are still affecting every aspect of the Tokyo Games. Daily testing regimens are in effect, athletes are dealing with strict rules about where they can go and most venues have no fans in the seats.

If not for that postponement, Pau Gasol wouldn’t be in these Olympics. His foot wasn’t ready a year ago. He needed more time to continue recovery from surgery and that, combined with the isolation that the pandemic required, only made a tough task more difficult.

But this spring, he found his way back to Barcelona and wound up playing a big role in its title run.

“I had to be really disciplined and kind of create my own routine and regimen, but with the support of people and creating a team back in the U.S., I had support,” Pau Gasol said. “Obviously, I can’t do it on my own, so it was challenging because the doctors weren’t giving me a lot of hope on different occasions. But I kept fighting. I kept believing that it was going to work out. And it worked.”

He’s dealt with more than just the injury in recent years.

Kobe Bryant’s death in January 2020 — they were teammates with the Los Angeles Lakers, the franchise that Pau Gasol won his two NBA titles with, becoming very close friends along the way — affected him deeply. When he and his wife welcomed a daughter into the world last September, they named her Elisabet Gianna, a nod to Bryant’s daughter who also died in that helicopter crash.

As the recovery, the rehab, the working his way back into basketball shape became a grind, Gasol said he thought of Bryant often.

It worked. He ignored the suggestions that he could retire, that a comeback from the foot surgery was risky.

He gets to dictate how the final chapter of his playing career will go. Basketball will remain his life — maybe front office work, maybe ownership, maybe even coaching one day — but for now, all he's thinking about is one more medal run.