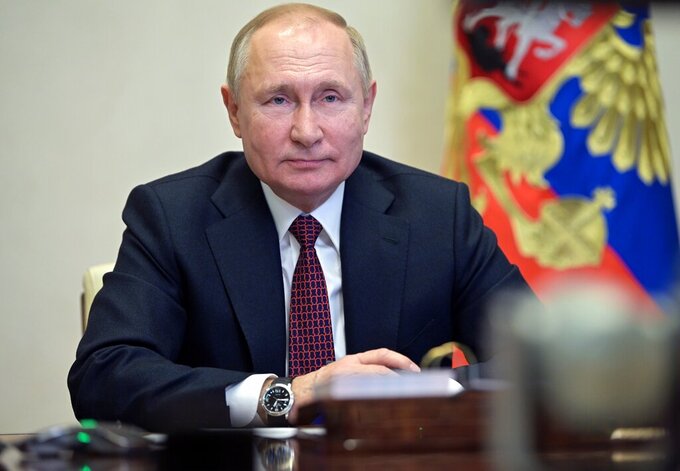 MOSCOW (AP) — Russia and China oppose “the politicization of sport and demonstrative boycotts” ahead of the Winter Olympics in Beijing, Russian President Vladimir Putin said Tuesday in an address to his country's athletes.

The U.S. is among several countries which have said they will not send politicians or other representatives to next month's Games in a so-called diplomatic boycott, citing concerns over human rights in China. Putin plans to attend the Olympics and to meet with Chinese leader Xi Jinping.

“I consider the main goal of these competitions to attract as many citizens as possible to sport and the strengthening of friendship between peoples. These approaches are shared by the organizers of the upcoming Games, our Chinese friends,” Putin said.

“Together we stand against the politicization of sport and demonstrative boycotts. We support the traditional Olympic values, above all, equality and fairness.”

Instead of the usual ceremony in Moscow before Russian teams depart to the Olympics, Putin addressed athletes by video link as they gathered at training centers across the country.

“I ask you and all of your teammates to rigorously observe all requirements of the organizing committee for the Games and to strictly follow all medical instructions,” he said.

As at last year's Summer Olympics in Tokyo, Russians will be competing without their country's name or flag at the Beijing Games in the fallout from years-long doping disputes. The team will be known as “ROC”, short for Russian Olympic Committee.