Qatar up for 2032 Olympics bid despite IOC backing Brisbane 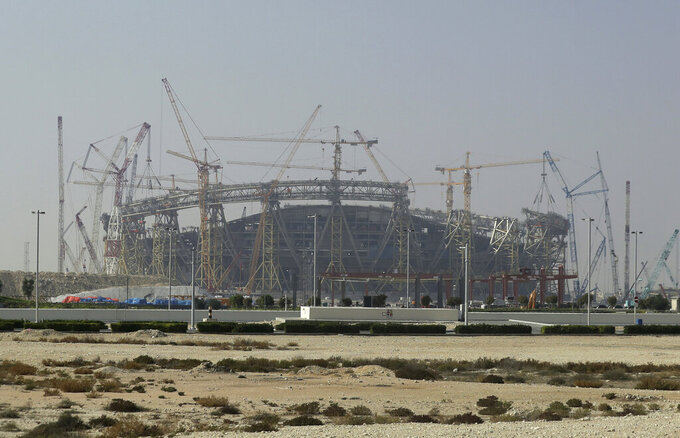 FILE - In this file photo dated Friday, Dec. 20, 2019, construction underway at the Lusail Stadium, one of the 2022 World Cup stadiums, in Lusail, Qatar. The gas-rich Persian Gulf nation Monday July 27, 2020, Qatar has expressed an interest in hosting the world’s biggest sporting events, the 2032 Olympic and Paralympic Games, in a letter to the International Olympic Committee.(AP Photo/Hassan Ammar, FILE)

DOHA, Qatar (AP) — Qatar was still committed Friday to bidding for the 2032 Olympics despite the IOC heading into exclusive talks with top choice Brisbane.

That decision seemed to surprise other expected candidates including Qatari capital Doha and Budapest, Hungary.

The Qatar Olympic Committee on Friday “reiterated its total commitment to maintaining continuous dialogue” with an IOC-appointed panel which can have ongoing talks -- and even approach -- likely candidates for any future Games.

Doha applied to enter two previous Summer Games bidding contests but did not progress to be accepted on the IOC’s list of candidates.

One factor weighing against Qatar is searing heat in the July-August slot the IOC prefers to hold the Summer Games. Doha hosted the 2019 track and field world championships from late-September into October.

“We have listened and learned from our two previous bids and humbly believe that we are now perfectly positioned to deliver a low-risk, sustainable and world-class edition of the Games,” Qatari Olympic leader Sheikh Joaan bin Hamad bin Khalifa Al-Thani said in a statement.

The IOC has given no timetable for a decision to confirm Brisbane or open up the contest.