Rapinoe's role changing as US preps for World Cup qualifying 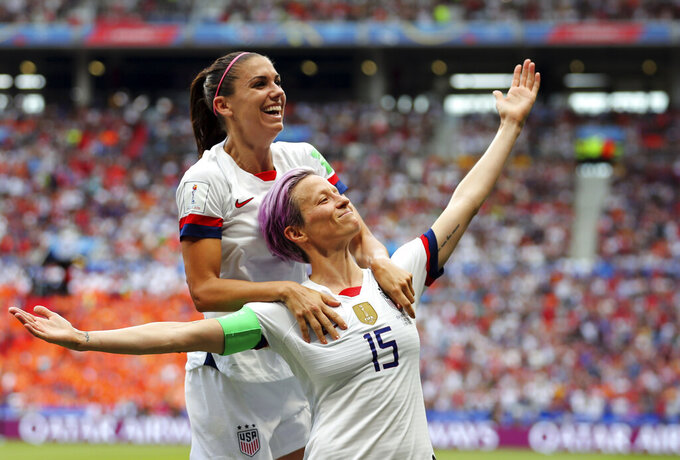 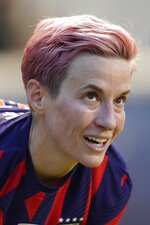 Known for her iconic victory pose at the 2019 World Cup in France, Megan Rapinoe's on-field role on the U.S. national team is changing as the team looks to qualify for the 2023 event.

The wily winger is now 36 and admittedly slowing a bit. Off the field, however, Rapinoe is outspoken as ever.

Rapinoe is among the veterans who will play in the upcoming CONCACAF W Championship, starting Monday in Monterrey, Mexico. The tournament determines the region's four direct spots in next summer's World Cup co-hosted by Australia and New Zealand, as well as a berth at the 2024 Olympics.

The team has a bunch of new faces since it won the bronze medal at the Tokyo Games, including Sophia Smith, Ashley Sanchez, Alana Cook, Mallory Pugh and up-and-comer Trinity Rodman.

"The thing with Megan is that she is very important for this group. I mean, obviously, this is a younger group that we’re bringing in. There are lots of young players. So her experience going through adversity, going through tough times and getting on top, her mentality -- winning mentality -- her knowledge and understanding, is very valuable for the group," U.S. coach Vlatko Andonovski said.

Rapinoe, has scored 62 goals with 72 assists in 189 appearances with the national team since her first call-up in 2006. She scored on a penalty kick in the United States’ victory over the Netherlands in the 2019 World Cup final, and had two goals in the victory over Australia for the bronze in Tokyo last summer.

But along the way she'd been unafraid to use her voice and her platform to call attention to social justice issues. As an out gay woman, she's been especially passionate about LGBTQ issues. But she was also important to the team's success in securing equitable pay with the men's national team.

She's backed up her words with action: She faced blowback for kneeling before two national team matches in 2016 in solidarity with Colin Kaepernick, the former NFL quarterback who knelt during the national anthem to draw attention to racial injustice.

She was among the athletes who signed on to an amicus brief in the lawsuit challenging an Idaho law that banned transgender athletes from participating in school sports.

She sparred with former President Trump on social media while in France at the 2019 World Cup. She proclaimed she wouldn't go to the White House even if invited and Trump countered on Twitter: “Megan should never disrespect our Country, the White House, or our Flag, especially since so much has been done for her & the team.”

And after the recent Supreme Court ruling that overturned Roe vs. Wade, she was among the most prominent athletes to denounce the decision rolling back abortion rights.

This week, Rapinoe will be among a diverse group of 17 people, including gymnast Simone Biles and actor Denzel Washington, who will be honored with the nation’s highest civilian honor, the Presidential Medal of Freedom.

Although Rapinoe is currently in Mexico with the team, she'll briefly leave to attend the ceremony Thursday in Washington D.C.

Rapinoe spoke to reporters shortly after she got word of the award, expressing hope that she has given others a roadmap for activism in their own lives.

“For whatever reason, I feel comfortable being out in front and center. I seem to thrive in it a little bit. So, if I can help other people walk in that, step into their power, understand that you don’t have to be me to make a difference. You can make a difference in your family, in your community in your school and in your workplace, whatever it may be.

"I have hopefully been able to set a good example for adults and and kids alike that using your voice and standing up for what is right is never the wrong thing to do.”