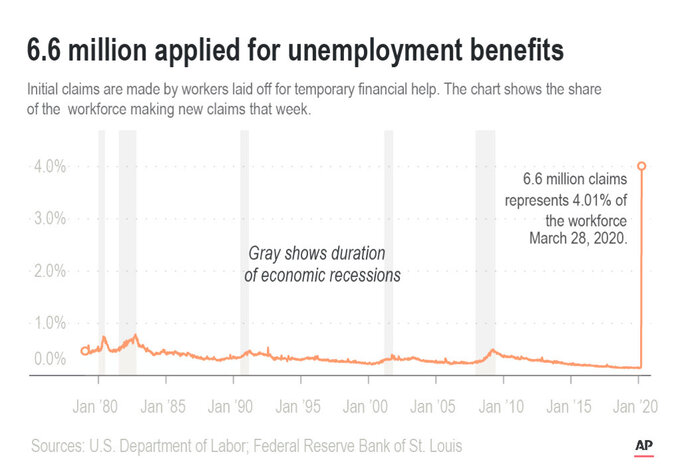 WASHINGTON (AP) — Fresh data on Thursday that detailed a record avalanche of unemployment claims offered no signs of easing the rift between Democrats and Republicans over the need for new legislation financing infrastructure and other job-creation programs.

With the coronavirus barreling across the country and sending the economy into a deep freeze, the report that 6.6 million people filed for jobless benefits last week made congressional action “even more critical,” House Speaker Nancy Pelosi, D-Calif., told reporters. The jaw-dropping figure doubled last week's record, which itself quadrupled the previous mark.

But a spokesman for Senate Majority Leader Mitch McConnell said the Kentucky Republican had nothing to add to his comments earlier this week that it's not time for Congress to rush ahead.

McConnell has told interviewers that lawmakers should first assess the effectiveness of the $2.2 trillion rescue package enacted last week, and has warned Pelosi against pushing environmental requirements and other Democratic priorities. He suggested to The Washington Post that the next bill should be “credibly paid for,” after last week's massive measure was financed by adding more borrowing to a national debt that's already $21 trillion.

A growing but still inconsistent national effort to starve the virus by ordering Americans to stay at home, which has snuffed out jobs and businesses, has led President Donald Trump to propose has a $2 trillion infrastructure package, though without detail.

Talk in the White House has percolated about the inevitability of another big stimulus package. But as of Thursday morning, there was no immediate plan to urgently push for a proposal or signal to McConnell to bring the Senate back to Washington, according to two administration officials who were not authorized to describe the discussions publicly and spoke on condition of anonymity.

“I’m not opposed to infrastructure. What I’m opposed to is using a crisis to restructure government," said House Minority Leader Kevin McCarthy, R-Calif. He said before writing more bailout legislation, “We’ve got to make sure this is implemented correctly.”

“First things, let’s put out the fire," said Sen. John Cornyn, a senior Republican from Texas, who said focus was needed on efficiently spending the already approved $2.2 trillion. "Then we can then we can think more carefully and deliberately about rebuilding the infrastructure.”

Trump himself lashed out Thursday at Pelosi’s creation of a bipartisan House select committee on the coronavirus as a “witch hunt” and “ridiculous” and predicted it would ultimately help build up his poll numbers. “I want to remind everyone here in our nation’s capital, especially in Congress, that this is not the time for politics, endless partisan investigations,” Trump said.

The president also slammed Senate Democratic Leader Chuck Schumer after the New York lawmaker criticized the administration's response to the pandemic. In a blistering letter, Trump told Schumer that if he had spent less time on the “ridiculous impeachment hoax,” New York “would not have been so completely unprepared” for the outbreak.

House Democrats are crafting a bill that Pelosi says is roughly the same size as Trump's $2 trillion. It would finance road, water and broadband projects, expand unemployment benefits and funnel money to state and local governments and hospitals.

With lawmakers at home and not expected to return to Washington until late this month at best, there was virtually no prospect that Congress could act soon. Even so, Pelosi has been setting markers for what Democrats want the next measure to contain, and she said Thursday that the House will move ahead, regardless of what the GOP-controlled Senate does.

All but daring McConnell to take no action, she added, “It’s obvious what is necessary to be done. To ignore it is to ignore the fact that the virus crisis is raging, that we can do something about it to rein it in, but it takes resources.”

Pelosi said she wants the next bill to extend the extra $600 weekly payments above existing state levels that last week's legislation is providing. That extra amount is due to last four months.

She also wants the plan to contain more money for food stamps and for states to administer the growing numbers of unemployment applicants, plus some kind of protections for renters.

State and local governments are being hit with a double-whammy: reduced revenues caused by the pandemic's economic havoc and additional costs of fighting it. They received a total of $150 billion in last week's bill, along with added federal payments for state Medicaid budgets, but advocates for states and cities say it won’t be sufficient.

States are required to balance their budgets and many governors are staring down enormous fiscal gaps. New York, for instance, could be staring at a $9 billion to $15 billion shortfall, according to the state budget director, while smaller states such as Oklahoma are estimating a $250 million to $500 million shortfall.

Pressure from governors in Trump strongholds could be a catalyst for Congress' next coronavirus relief legislation. Pelosi acknowledged that, telling reporters that demands from state and local officials was “probably the biggest leverage" Democrats will have to get another bill.

The approaches taken by Pelosi and McConnell also reflect the rivalries between the two, as well as internal party politics.

Pelosi runs a top-down operation, taking a lead in virtually all major legislation that involves negotiations with Republicans. She often seeks to demonstrate that she’s consulting with rank-and-file lawmakers, such as when she produced last week’s $2.5 trillion Democratic coronavirus proposal.

Republicans such as McConnell like to demonstrate toughness in dealings with Pelosi. That was on display when he limited her participation in the last month’s talks on rebate checks and relief for businesses big and small.

Pelosi also said she will establish a special House committee with subpoena power to oversee the government's spending of the trillions it is providing to combat the effects of the pandemic.

She said the new bipartisan panel would be headed by No. 3 House Democratic leader James Clyburn of South Carolina and will try guarding against waste, profiteering, price gouging and political favoritism. Pelosi said it was modeled on a Senate committee that oversaw defense spending during World War II.

McCarthy, the top House Republican, said he opposed Pelosi's proposal, saying it would take weeks to establish and would duplicate work by existing oversight panels.