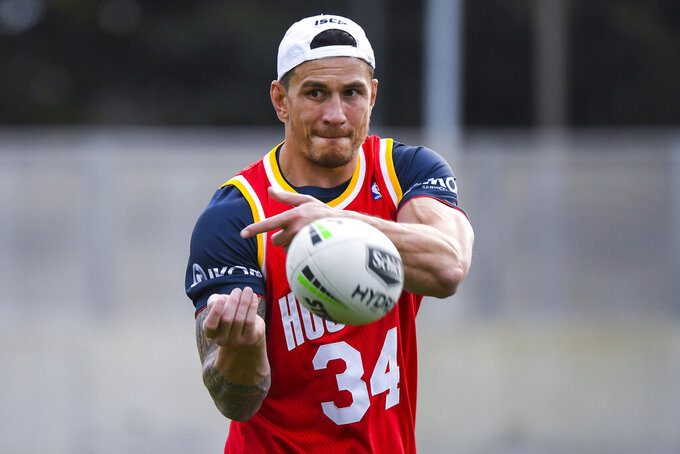 Sonny Bill Williams of the Sydney Roosters National Rugby League team passes a ball during a training session in Sydney, August 15, 2020. Ex-New Zealand All Blacks star Williams is set to play in the National Rugby League for the first time since 2014 after being included on the Roosters' interchange bench for a Grand Final rematch against the Canberra Raiders on Saturday, Sept. 5, 2020. (Dean Lewins/AAP Image via AP)

SYDNEY (AP) — Ex-New Zealand All Blacks star Sonny Bill Williams is set to play in the National Rugby League for the first time since 2014 after being included on the Sydney Roosters’ interchange bench for a Grand Final rematch against the Canberra Raiders on Saturday.

Williams signed a short-term deal to return to the NRL champion Roosters after the Toronto Wolfpack withdrew from the England-based Super League season in July because of the coronavirus pandemic.

The 35-year-old Williams had to spend two weeks in quarantine after returning to Australia and hasn’t played a top-level game since early March. The dual rugby league and rugby union international is joining the Roosters squad for the Round 17 encounter in Canberra, where the Raiders are aiming to avenge their 2019 NRL grand final defeat.

“Everyone here holds him high regard. He’s the ultimate professional,” Roosters fullback Jame Tedesco said. “There is a lot of hype — (but) it’s warranted with the guy he is and the player he is. I think everyone can’t wait to have him on the field.”

New Zealand-born Williams forged a reputation as a hard-hitting, hard-running forward for the Canterbury Bulldogs in the NRL before switching to the 15-a-side rugby union with the aim of qualifying for the All Blacks.

He played 58 tests for the All Blacks and was part of the squads that won Rugby World Cup titles in 2011 and 2015, spending two seasons in the NRL with the Roosters in between. He has also played rugby sevens for New Zealand, competing in the 2015–16 World Rugby Sevens Series and the 2016 Rio Olympics.

The Roosters and Raiders are in fourth and fifth places in the NRL standings with 11 wins apiece and four games remaining in the regular season.