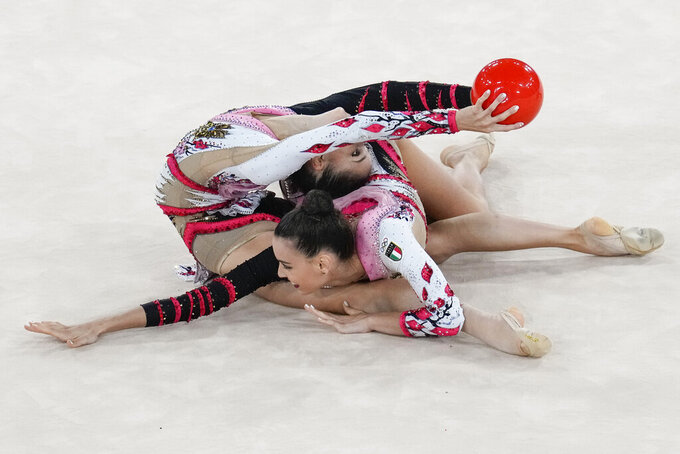 TOKYO (AP) — The Russian rhythmic gymnastics juggernaut collapsed at the Tokyo Olympics, with dramatic back-to-back losses that sparked furious allegations of injustice in a sport famous for twinkling costumes, techno remixes and hoops looping through the air.

Russia had won every gold medal in rhythmic gymnastics since 2000. But it’s total defeat this year began Saturday, when Linoy Ashram of Israel won gold in the individual competition, edging out of a pair of Russian identical twins who were the favorites heading into Tokyo. Dina Averina placed second and her sister, Arina, fell to fourth.

“It’s so unreal, we cannot believe it. I don’t know what to say,” Bulgarian gymnast Stefani Kiryakova said. “This is the happiest moment ever.”

The rhythmic gymnastics group finals are a two-part competition for groups of five women. Part ballet, part gymnastics, part circus, the event begins with the teams dancing with balls, then moves on to a set of hoops and clubs.

Bulgaria pulled ahead after the first routine, performed to a lively Bulgarian folk song called “Water Cosmos Earth.” Their orange-red balls looked like fire as they soared through the air. The Russians performed to traditional opera in pink, blue and gold costumes that made them look like spinning toy dolls.

The group performances, each a spectacle of 2 1/2 minutes, are so packed with flying objects and women twisting and cartwheeling across each other it’s difficult for the untrained eye to comprehend its acrobatic intricacies. The gymnasts often move as perfect mirrors of each other, like synchronized swimmers without water.

Italy’s bronze medal-winning team is known as “the butterflies,” and gymnast Alessia Maurelli said they spend years learning to move as one.

“We are only one thing, only one person, only one butterfly,” she said.

In the second round of the group competition, the teams throw and catch three hoops and two pairs of clubs. Bulgaria performed in dazzling red corset-like costumes to the soundtrack from the ballet Spartacus. The gymnasts spun over each other with hoops around their ankles, windmilling them across the competition floor to be caught by teammates dozens of feet away.

The Russians hoped to pull ahead with a performance to another opera composition, spinning and throwing the hoops and clubs in perfect synchronization. At one point, three gymnasts bent at the waist, and their teammate rolled across their backs.

But as the scores appeared on the arena’s screen, the Russian gymnasts wept, one dropped her head into hands as the Bulgarians jumped in shocked triumph.

The reaction back home in Russia has been brutal. The country is barred from using its name, flag or anthem at the Olympics because of a doping scandal. Its athletes compete under the banner of ROC, short for Russian Olympic Committee.

Social media discussions have been full of allegations of a conspiracy to hurt Russia’s medal count and some lawmakers have weighed in with their own theories. Head coach Irina Viner-Usmanova told the RIA Novosti state news agency Sunday that “everyone understood perfectly well that this was meant to happen, that Russia’s hegemony had to be stopped.”

The very night an Israeli won the individual competition, ROC president Stanislav Pozdnyakov called on the International Gymnastics Federation to do an inquiry into the judging.

“Our staff and lawyers have already drawn up a request and sent it to the leadership of the International Gymnastics Federation,” Pozdnyakov wrote on Instagram Saturday.

Dina Averina, the 22-year-old gymnast who won the silver medal, also said shortly after the competition that she believed the judges had not been fair to her from the very start of the competition, when Ashram quickly took the lead. The post-Olympic photo she chose to post on her Instagram captures her in the moment she learned she’d lost, still in a bedazzled red leotard and a tight bun atop her head, standing with her arms crossed and her brow furrowed.

She later gave an emotional interview with sports broadcaster Match TV: “It hurts and it’s painful that there was unfair judging today,” she said, and noted that Ashram dropped her ribbon near the end of the competition, a major mistake in the sport. “I got through all of the disciplines more or less cleanly, properly, and came second. I’m hurt by the injustice, I support honest sport."

Russian teammate Anastasia Bliznyuk, who performed as part of the five-woman group, also said after Sunday’s competition that they executed their difficult routine without any major mistakes, and usually when they do so, they win.

But not this time.

The winners who took home gold instead of the Russians said they felt like they were in a dream.

“It means everything,” Kiryakova said. “We put so much into these five years, so much work. We always believed we would be here, but it’s still so unreal.”