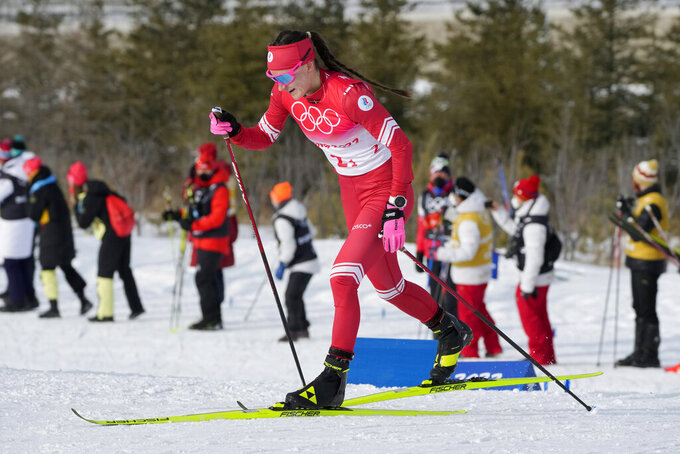 ZHANGJIAKOU, China (AP) — The Russian team took the lead at the start of the women's four-person relay and held on at the end to win another Olympic gold medal in cross-country skiing on Saturday.

Yulia Stupak broke away early with nine women chasing. On the next leg, Natalia Nepryaeva was chased down by Katharina Hennig of Germany.

The Germans briefly took the lead on the last lap, with Russian skier Veronika Stepanova just behind Sofie Krehl. But Stepanova pulled away on the final climb and won in 53 minutes, 41 seconds. Germany took silver, 18.2 seconds behind. Sweden edged Finland for bronze.

“Of course, it is a special day," Stepanova said. "It was really tough because we have a win in the World Cup, and a lot of people know we can win, so they say, ‘You must win. You must win.’ So I am like, ‘OK, we need a good result,’ and I do what I can do.”

Tatiana Sorina skied the third lap for the Russian team, which is competing at the Beijing Games under the acronym ROC — short for Russian Olympic Committee.

Despite settling for silver, Krehl was satisfied.

“Maybe I need some time and then I can recognize what we have done," the German said. "Of course it’s a surprise, but we all had really good races the last (few) days.”

The four-person relay began as a mass-start with 18 racers. Each woman skied two laps on a 2.5-kilometer (1.5-mile) course. The first two skiers raced in the classic style and the last two in freestyle.

Norway ended up in fifth place, just ahead of the United States in sixth. Therese Johaug, who already has won two gold medals at the Beijing Games, briefly brought the chase group closer to the leaders but she couldn't catch them.

On the first lap, Tiril Udnes Weng of Norway fell and lost some time.

“So I tried to do the best with the position I had,” Johaug said. “I tried to reach both Sweden and Finland, but Russia and Germany, they were the strongest today. Anyway, it’s relay.”

Johaug won gold in the skiathlon and the 10-kilometer race. She also won gold in all three events at the 2021 world championships, plus the 30-kilometer mass start race. She said she is setting her sights on that one next.

The gold was the Russian team's second in cross-country skiing at the 2022 Games. Alexander Bolshunov won the men's skiathlon.

In the 2018 Olympic relay, Norway took gold, followed by Sweden and the Russian team. Finland was fourth. The only Norwegian from that gold-medal team racing in the relay on Saturday was Ragnhild Haga.

The Americans finished 1:28.2 behind the Russians. Jessie Diggins praised her U.S. teammates for their performance.

“Personally I'm really, really proud of this team,” Diggins said. “Every single one of these girls went out and skied so hard and skied gutsy races and we gave it everything we have. Some days that ends up being the results of your life and some days it doesn't."