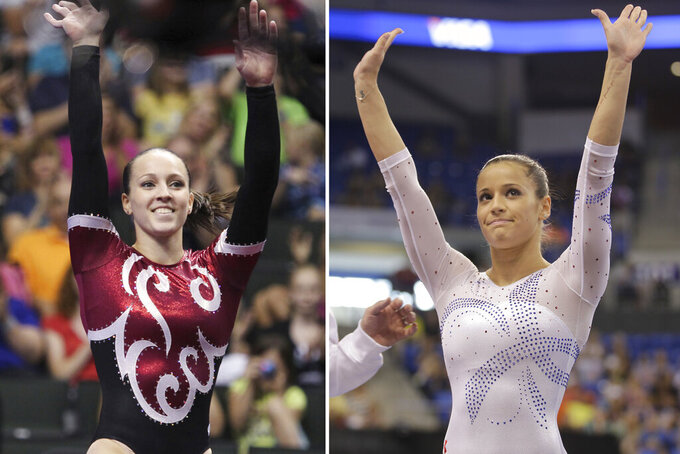 FILE - At left, Chellsie Memmel is shown during the final round of the U.S. gymnastics championships, Saturday, Aug. 20, 2011, in St. Paul, Minn. At right, Alicia Sacramone waves to the crowd during the women's senior division at the U.S. gymnastics championships, Sunday, June 10, 2012, in St. Louis. Alicia Sacramone Quinn and Chellsie Memmel won Olympic and world championship medals together. Now the two longtime friends and USA Gymnastics teammates are tasked with leading the organization back to the top of the podium. (AP Photo/File)

Alicia Sacramone Quinn and Chellsie Memmel walked through the fire together for much of their decorated gymnastics careers, becoming more than just teammates as they traveled the globe for one of the U.S. Olympic movement's marquee programs.

USA Gymnastics is leaning on that chemistry to help lead the organization into a new era, one the national governing body insists remains focused on being steadfastly transparent and athlete-centric as it plots a way forward in the wake of the Larry Nassar scandal.

Quinn and Memmel — who helped the Americans claim silver at the 2006 world championships and 2008 Olympics during their lengthy run with Team USA — have pledged to be part of the solution.

Memmel will serve as the technical lead, with Baker in charge of development and Quinn heading strategy as part of a new paradigm designed to make sure no one person within the women's program exerts too much influence.

How exactly it's going to work remains to be seen. Quinn, 34, called her job title “fluid” but envisions her role as being the point person for athletes and coaches on the national team, with Memmel — an accomplished judge — helping put together routines designed to maximize the sport's Code of Points.

Their goals are twofold. One is to help the U.S. return to the top of the podium following a surprising second-place finish to Russia at the postponed 2020 Olympics — the first time the Americans did not win the team gold in a major meet in more than a decade — and do it while creating a positive environment for the athletes.

Memmel and Quinn both competed for the Americans under the guidance of Martha Karolyi, who turned the U.S. into a juggernaut while using methods some former gymnasts and coaches have described as verbally and emotionally abusive.

Quinn allowed that during her career, the elite program was very “fear-driven.” That's not the vision she has for USA Gymnastics going forward.

“I don’t want to be leading from a position of fear," she said. “I want these athletes to be inspired. ... I think if I can find a way to inspire them and not make them fear me, I think I could get (a) better result from the athletes."

The difficulty will be how to walk what is becoming an increasingly fine line between creating an environment that empowers athletes while simultaneously challenging them to become the best in the world.

“Yes, it should be fun, but it’s also going to be a lot of work,” she said. “Just because something is fun doesn’t mean it’s easy.”

Memmel, who competed at the national championships last summer just before her 33rd birthday, finds herself in the unique position of now leading a group she was a part of not long ago. That leadership will include making sure the Americans adjust to a code of points that has shifted in recent years to put more of an emphasis on artistry than boundary-pushing tumbling.

The Russians used that shift to help surge past the U.S. in Tokyo after reigning world and Olympic champion Simone Biles removed herself from competition during the team final to focus on her mental health. While Memmel said leadership during the quadrennium between the 2016 and 2020 Olympics made athletes aware of how the code was changing, those changes weren't necessarily implemented into the routines.

“I don’t know if we still thought that by doing just all of the big skills, it was just going to take care of (everything),” said Memmel, who stressed she wasn't placing blame on anyone but added, “we were missing some of that artistic quality to our routines.”

Her mission is to make sure that is resolved before the flame is lit at the 2024 Games in Paris. It's one of just several areas the new leadership will attempt to address as openly as possible, which includes being as transparent as possible when it comes to international assignments.

Quinn's philosophy signals a stark contrast to the “medals over all else" approach she experienced during her career.

“Nothing we’re trying to implement is going to be at a detriment to our efforts," she said. “Our goal is to put out the healthiest, most ready, physically, mentally, emotionally capable athlete in that moment (on the floor). And you know what? Once they're on the competition floor we're sitting there like, ‘alright, let’s see what's going to happen' because anything can happen.”