Samaranch voted back on IOC executive board at Beijing Games 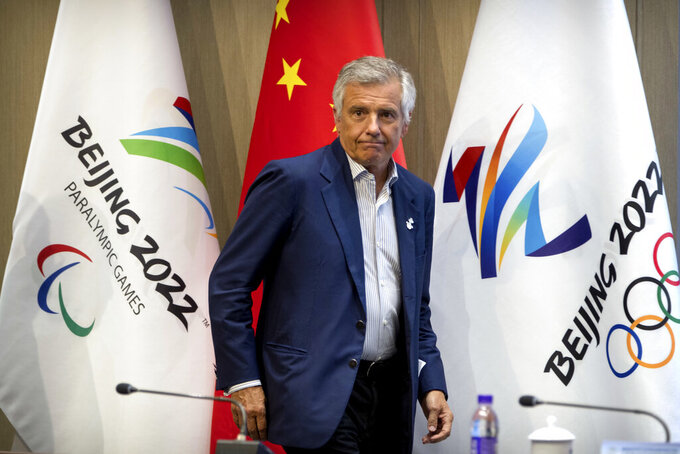 BEIJING (AP) — The International Olympic Committee member who oversaw preparations for the Beijing Games was voted back onto the body's executive board on Saturday.

Juan Antonio Samaranch, whose father was IOC president from 1980-2001, was the only candidate for the sole vice president slot that was open.

The move puts Samaranch in position for an expected run at the IOC presidency. Current IOC rules require Thomas Bach to stand aside in 2025 after 12 years as president.

“You cannot, or maybe you can, imagine how happy I am to continue working with all of you,” Samaranch told IOC members.

Samaranch will take over the vice president seat of Yu Zaiqing of China, who had to step down after completing the maximum two consecutive four-year terms.

Samaranch previously served as a VP from 2016-20. He now returns to the 15-member IOC board, where decision-making and power has become more concentrated under Bach’s hands-on leadership.

Samaranch served as chairman of the IOC coordination commission for the Beijing Olympics from 2018 and became the main point of contact with officials in China.

He has longstanding ties to the country. In 2012, he founded the Chinese government-backed Samaranch Foundation, which said it wanted to develop Olympic culture in the country to honor of his father. The elder Samaranch, who had the same name, died in 2010.

The IOC board now includes several potential candidates to succeed Bach, including another vice president, Nicole Hoevertsz of Aruba.

Hoevertsz, who competed at the 1984 Los Angeles Olympics in synchronized swimming, had her IOC membership renewed Saturday. She is leading the IOC’s oversight of the 2028 Los Angeles Games.

Five new IOC members were installed Saturday, including refugee athlete Yiech Pur Biel, who competed at the 2016 Rio de Janeiro Olympics. He was sent from South Sudan as a child to live at a refugee camp in Kenya before training and winning selection for the inaugural Olympic refugee team.

The IOC also extended the membership of Luis Alberto Moreno, a former diplomat who is the Olympic body's official observer at the United Nations. Moreno is the former ambassador for Colombia to the United States.