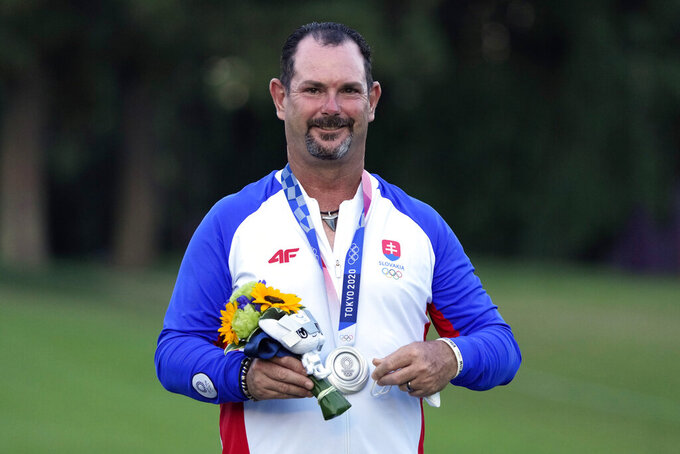 Silver medal winner Rory Sabbatini, of Slovakia, stands on the podium after the men's golf event at the 2020 Summer Olympics, Sunday, Aug. 1, 2021, at the Kasumigaseki Country Club in Kawagoe, Japan, (AP Photo/Andy Wong)

KAWAGOE, Japan (AP) — Rory Sabbatini has a silver medal and his name in the Olympic record book with his 61 in the final round. Whatever motives the South African had in becoming a naturalized citizen of Slovakia is secondary to his performance.

But now it's time to move forward, and another battle looms.

Sabbatini left Tokyo with a silver medal and has only one week to perform well enough to keep his full PGA Tour card.

Sabbatini's best finish this season is a tie for 10th at the Farmers Insurance Open in late January. In the 15 tournaments since, he has missed the cut 10 times, including four straight, until finishing one shot behind gold medalist Xander Schauffele.

He is No. 138 in the FedEx Cup standings and likely will need a top 10 at the Wyndham Championship next week, the final event of the regular season. The top 125 advance to the lucrative postseason and keep full status for the next season.

Sabbatini still has a safety net. He is No. 29 in career money on the PGA Tour at just over $35 million and can use a one-time exemption for being in the top 50 on that list.

Either way, it will be hard to top a moment like this. His wife, Martina, is Slovakian and her cousin was vice president of the Slovak Golf Association when the idea was broached for him to become a citizen and raise interest in a country that has only about 30 golf courses.

There was an Olympic perk, sure. There were 15 players from South Africa ranked higher than Sabbatini when the Olympics began. But he says there was a bigger objective.

“At the time, the discussions we had were South Africa has so many golfers to represent them, but Slovakia doesn't have anybody,” Sabbatini said. “And we looked at it as a way to use it as a springboard to try and create more interest in the game of golf in Slovakia and to create more interest among the junior golfers.”

An Olympic medal would do that more than getting into the FedEx Cup playoffs. And if Sabbatini doesn't make it to Liberty National for the start of the postseason, it probably won't change the outlook on his year.

“It's been such a prideful moment to be up there to represent Slovakia and to see the flag raised. Words really cannot express it," he said. “So it’s just been a fantastic experience all around for the entire Olympics and I’m just very thankful.”

Thomas Bach came out to Kasumigaseki Country Club for the third round of men's golf, and the International Olympic Committee president experienced something new.

He stood under a tent next to the first tee with PGA Tour Commissioner Jay Monahan and Antony Scanlon, executive director of the International Golf Federation.

Paul Casey was in the group waiting to tee off, and with a slight delay because of other players down the first fairway, he walked over and began to chat with Bach.

After a few minutes later, it was time to tee off.

Bach was heard saying, “In all my years at the Olympics, that is the first time an athlete has spoken to me during competition.”

It was evident Bach hasn't spent a great deal of time around golf. Or the affable Casey.

With so much heat at Kasumigaseki Country Club, Rory McIlroy picked a strange week to not wear a hat.

He says that wasn't all by choice.

McIlroy said his head is on the small side. Team hats tend to be on the big side. He also doesn't wear a cap at the Ryder Cup. Both the Ryder Cup and the Olympics are free of corporate logos.

“I have to get Nike to make me custom hats,” McIlroy said. "So whenever I’m in a team event and the hats aren’t custom, they’re all too big.”

Maybe it’s time for the Dutch national committee to rethink its curious decision on whom it sends to the Olympics.

Luiten, a six-time winner on the European Tour, was No. 177 in the world and Besseling was at No. 221 when qualifying ended. Both were outside the top 40 in the Olympic ranking.

According to a spokesman from the Netherlands Golf Federation, the committee only wants to send athletes who have a realistic chance of winning.

Luiten said it’s common for players outside the top 100 to win — that has already happened 13 times on the PGA Tour this season — and it was proof the Dutch committee doesn’t understand golf.

The results from the Olympics speak volumes.

Rory Sabbatini of Slovakia won silver. He was No. 204 in the world.

C.T. Pan earned the bronze after winning a seven-way playoff that included Rory McIlroy and British Open champion Collin Morikawa. Pan was No. 208.

Matt Wolff is in the field for the FedEx St. Jude Invitational, and he plans to play the following week in the Wyndham Championship to close out the PGA Tour’s regular season. That could be worth $1 million regardless of his scores.

Even with a two-month break after the Masters to rediscover the joy of playing, Wolff has a substantial lead in the Aon Risk Reward Challenge. That’s a season-long race in which a strategic hole is identified at every PGA Tour event and a player's best two scores of the week are recorded. Whoever has the average low score to par gets a $1 million bonus.

The minimum is 40 rounds to be eligible for the bonus. Wolff is at 36.

But with a no-cut event at the St. Jude Invitational (four rounds guaranteed) and playing the Wyndham Championship, Wolff would reach the minimum.

From there, it would be tough for Louis Oosthuizen and Joaquin Niemann to catch him.

The winner on the LPGA Tour, who also gets $1 million, isn’t decided until the season ends in November.

The Hero World Challenge that Tiger Woods hosts in the Bahamas is expanding its field from 18 to 20 players. Automatic invitations go to the defending champion, the four major champions and winner of The Players Championship. Because it was canceled last year, the 2020 major champions also are exempt. ... The R&A is the latest golf organization to put men and women on the same course. For the first time, the Girls' and Boys' Amateur will be held together at Carnoustie next year. The Women's and Men's Senior Amateurs also will be held concurrently at Royal Dornoch. Meanwhile, the British Amateur will be at Royal Lytham & St. Annes. ... The Olympic gold medalist gets a spot in the four majors and The Players Championship next year. Xander Schauffele is still not eligible for the Sentry Tournament of Champions in Kapalua. ... Viktor Hovland of Norway reached the top 10 in the world ranking for the first time. ... Rickie Fowler is No. 125 in the FedEx Cup and chose not to play the Barracuda Championship this week.

The women have 29 players competing for Olympic golf for the second straight time. The men had nine players in both Rio de Janeiro and Tokyo.

“I never tried so hard in my life to finish third.” — Rory McIlroy on the seven-way playoff for the bronze medal. He was eliminated on the third extra hole.