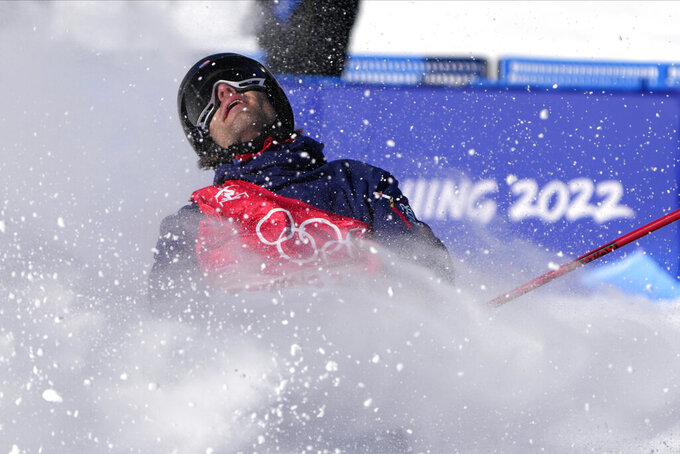 ZHANGJIAKOU, China (AP) — The medals were great. Every bit as important to American slopestyle skiers Alex Hall and Nick Goepper: They did it their way.

Hall and Goepper took a gamble by being different Wednesday with a pair of high-stakes runs over an Olympic course that was built for taking chances.

Hall won gold. Goepper took silver. And they reminded the world that the most beautiful feature about all the bumps and jumps at the snow park is the freedom that comes in trying new things.

“I was stoked," Hall said. “I wanted to come out here and show the world what I do as a skier, and show the creativity, and thinking outside the box.”

For Hall, the 23-year-old who was born in Alaska and grew up in Switzerland, “outside the box” looked like two tricks that nobody else much thought about at the supersized Secret Garden slopestyle course. It's a layout filled with options for those who take the time to look around.

Where most skiers — and snowboarders before them — would take one of the side ramps to approach the massive kicker leading into the second jump on the course, Hall chose the smoother runway that splits the middle of the approach.

He did two jumps there. First, he skimmed the top of the jump while spinning 720 degrees, then he jumped again and threw a 540-degree spin while reaching backward with his right hand and grabbing his left ski.

It's as complicated as it sounds. One key detail: Where most skiers fly high off that jump, Hall never got more than 3 feet off the ground.

It was a trick he first dreamed up at an event called “knuckle huck" — a free-form contest run off the knuckle of a jump at the Winter X Games. The only rule at that one: Do something cool. At one moment in knuckle huck earlier this year, a snowboard rider laid on the jump and used his feet to brace his snowboard above his head, then his buddy approached him and threw a trick off the friend's board.

Hall's final jump was unique, too. Where most riders were going huge off the ramp before the finish area — jumps with 1440 degrees of spin or more — Hall tried what's called “right double 10 pretzel 1.”

It involved 900 degrees of spin one way, then, as the G-forces were taking over, Hall stopped the spin in midair and spun 180 degrees the other way. Vertebrae be damned, he nailed that trick. His skis slammed down ramrod straight on the snow and he skied in backward to the finish.

The judges appreciated the chances Hall took. His 90.01 in the first of his three runs held up, and Hall won by more than 3.5 points.

“A lot of what we do, we call 'spin to win,' and, so, everyone is spinning as much as they can," Hall said. “To take a new approach and do a trick that has almost no rotation but is still really, really hard — it was really, really sweet.”

Bronze medalist Jesper Tjader of Sweden was too busy to see Hall's run as he prepared for his own. But word spread quickly across the mountain.

Goepper now has two silver medals and a bronze over the three contests held since slopestyle came to the Olympics in 2014.

Like Hall, he saw different possibilities on the course fitted with snow-carved replicas of sections of the Great Wall. The show-stopper amid all that artwork is a pagoda-shaped guard house that also doubles as a rail section up top. Its nickname: The Shred Shed. Goepper decided to ski right on top of it.

“I think I had to separate myself in some other way,” he said of the calculation he made in respect to the judges. “And I also thought jumping on top of that house would be really cool.”

And where Hall saw a chance to skim over the second jump, Goepper approached it from a different angle. Instead of taking off from the middle, or from the side ramps, he launched off it from a halfpipe-shaped wall on the side. He did a double-cork 1440 and landed it perfectly.

“Sometimes big contests are just sort of business as usual and you have to just slog together a run,” Goepper said. “This, it felt good to do it how we wanted to do it.”

The Americans have now won six of the nine medals in the short history of slopestyle at the Olympics.

It began with a sweep. Goepper took silver in 2018. Now this: A 1-2 finish that was about more than medals. It was a timely reminder about why all these skiers and snowboarders chose the rails and jumps in the snow park over the black diamonds and groomers on the rest of the mountain.

“That really is what we’re all about,” U.S. coach Skogen Sprang said. “It’s creating new stuff and having fun.”