South Africa close in on Series title at Edmonton Sevens 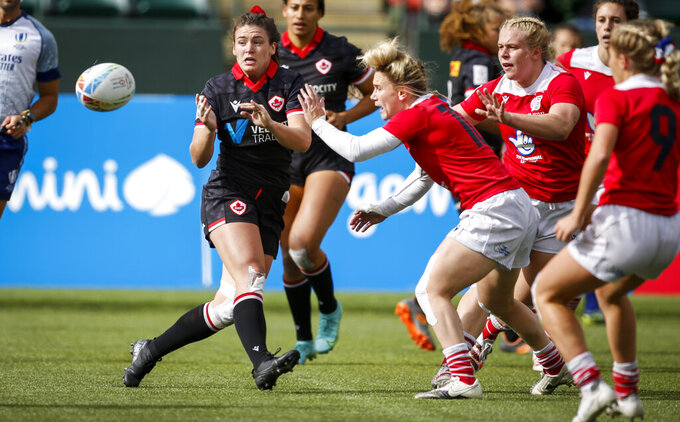 EDMONTON, Alberta (AP) — South Africa closed in on the rugby Sevens World Series title by cruising through the group stage undefeated and advancing to the quarterfinals of the Edmonton tournament on Saturday.

South Africa only needs to make the final at Edmonton to be crowned series champion after its tournament victory in the Vancouver, British Columbia leg last week in a truncated 2021 series due to the coronavirus pandemic.

The twin tournaments are missing many of the top-ranked teams due to COVID-19 travel and quarantine restrictions, including Tokyo 2020 Olympic gold medalists Fiji, silver medalists New Zealand, as well as Australia and Samoa.

South Africa picked up where they left off last week by thrashing Mexico 56-0 and Hong Kong 43-5 in its first two pool games on Saturday. The ‘Blitzboks’ followed that with a 49-0 win over Olympic bronze medalists Canada in the final game of the day to set up a quarterfinal with Hong Kong, which qualified as one of the two best third-placed teams, on Sunday.

The U.S. again finished its pool games unbeaten with a 29-17 win over Spain, followed by a comfortable 33-5 victory over Chile with Malacchi Esdale scoring two tries. In its final game of the day the U.S. edged Kenya 19-14 to gain some revenge after losing to the Africans in the quarterfinals at Vancouver last week.

The U.S will play Britain in the quarterfinals, with Kenya to play Germany.

Ireland again topped its group beating Germany and Jamaica before having a 12-12 draw with Britain to set up a meeting with the hosts in the quarterfinals.

Despite a shock 19-10 loss to Germany, Britain reached the knockout stages as the best third-placed team.

In the women’s Fast Four, Britain finished the group stage unbeaten with two wins and a draw and will play Mexico in Sunday's semifinals as it looks for consecutive tournament titles after winning in Vancouver last week. Hosts Canada will play the U.S. in the other semifinal.