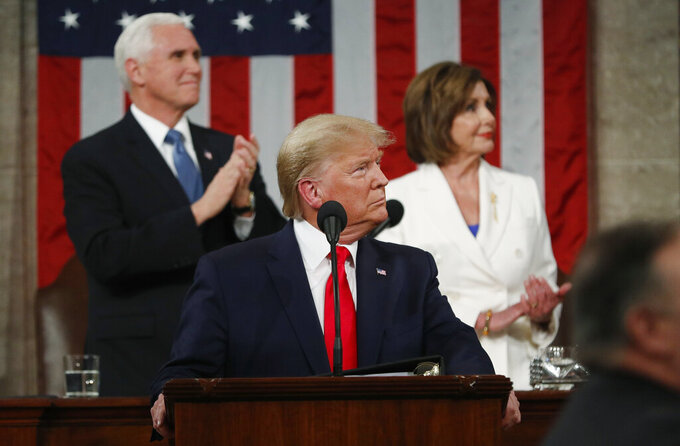 FILE - In this Feb. 4, 2020, file photo, President Donald Trump look to the first lady's box before delivering his State of the Union address to a joint session of Congress in the House Chamber on Capitol Hill in Washington, as Vice President Mike Pence and Speaker Nancy Pelosi watch. Trump and Pelosi have not spoken in five months at a time when the nation is battling its worst health crisis in a century. (Leah Millis/Pool via AP)

WASHINGTON (AP) — Two of the most powerful people in Washington have not spoken in five months at a time when the nation is battling its worst health crisis in a century, one that has already killed more than 5,000 Americans and put 10 million others out of work.

President Donald Trump and House Speaker Nancy Pelosi last talked on Oct. 16, when Pelosi pointed her finger at the seated president during a heated exchange in a White House meeting that was captured in a widely shared photograph. Pelosi stormed out, and the two leaders’ frayed relationship was soon severed by the House's impeachment of Trump months later.

Now, there are worries the broken relationship could hinder the federal government's ability to respond to the growing coronavirus crisis, the extent of the damage reflected in Thursday's report that a record 6.6 million people filed for unemployment, adding to more than 3 million from two weeks earlier.

“Relationships are the beginning of everything. Trust in one another is key to cooperation,” said John M. Bridgeland, who held government posts under Presidents George W. Bush and Barack Obama.

The relationship between Trump and Pelosi, never warm, appears beyond repair after the president's impeachment, according to allies of both leaders. Even the COVID-19 pandemic, which has rewritten the rules of daily American life and threatens people's health and employment, has done nothing to thaw the ice between the two.

Last month, as Washington crafted the most expensive stimulus package in U.S. history, Trump and Pelosi eyed each other warily from opposite ends of Pennsylvania Avenue, the president leaving it to others to negotiate a $2.2 trillion economic relief package.

Trump and Pelosi communicated with — or at — each other via Twitter and television or through intermediaries the other side could tolerate. Chief among them has been Treasury Secretary Steven Mnuchin, who personally negotiated the three rescue bills passed so far. When Trump signed the package at the White House, he did not invite Pelosi or any Democrats to join him.

The record-breaking jobless claims reported Thursday add new urgency to the matter of next steps for Congress, which had been moving, slowly, toward crafting another recovery bill that could equal or surpass the first stimulus' price tag.

Pelosi and Mnuchin worked out the stimulus by speaking dozens of times by phone and in the speaker's Capitol office overlooking the Mall. Going forward, new White House chief of staff Mark Meadows, who has a relationship with Pelosi, is expected to be another leading conduit.

Pelosi said Thursday that she and Mnuchin had spoken the previous night about the next part of the package. She played down her lack of communication with Trump.

"Whatever communications we need to move forward, that will be happening whether I talk to the president or not,” Pelosi said. “It’s not casual. It isn’t, 'Let's just chat.' It’s about what is the purpose, what is the urgency, does it require the time of the speaker and the president, both of whom are very busy people."

The speaker also announced Thursday the formation of a House select committee on the coronavirus crisis, a bipartisan panel chaired by Majority Whip James Clyburn, D-S.C. Trump lashed out at the panel as a “witch hunt” and “ridiculous” and said it would ultimately help “build up his poll numbers.”

“I want to remind everyone here in our nation's capital, especially in Congress, that this is not the time for politics, endless partisan investigations,” Trump said during the White House coronavirus task force briefing.

The pandemic is a time when Americans may have less tolerance for the usual partisan bickering or brinkmanship.

“There’s no space for politics,” said Democratic Rep. Ben McAdams of Utah, who is recovering from the coronavirus and is one of several lawmakers who have isolated themselves to avoid spreading it. “Really, we have to come together and work together to save lives, and that is the only thing that matters right now.”

According to a new poll by The Associated Press-NORC Center for Public Affairs Research, 44% of Americans approve of how Trump is handling the coronavirus outbreak, closely mirroring his overall approval rating.

And fewer Americans -- 38% -- approve of the federal government’s job of handling the virus’ spread throughout the country, compared with larger shares approving of how their state and local governments are doing (57% and 54%, respectively).

Just 31% of Americans approve of how leaders in Congress are addressing the coronavirus, while 41% disapprove.

It wasn’t always this bitter between Trump and Pelosi.

After the Democrats captured the House in November 2018, Trump actively cheered for Pelosi to retake the speakership, telling aides that he respected the California Democrat’s political survival skills and believed she was a transactional politician with whom he could deal.

Instead, Pelosi became his most visible antagonist, creating viral images when she mockingly clapped for him during his 2019 State of the Union address and when she strode out of the West Wing after another tense meeting clad in a designer coat and sunglasses. Their dispute over funding for Trump’s border wall led to the longest government shutdown in history.

Their feud exploded last year when Pelosi overcame her initial reluctance and authorized an impeachment inquiry into Trump’s attempts to pressure Ukraine into investigating the family of a Democratic political foe, former Vice President Joe Biden.

Trump has told aides and confidants that he feels as if Pelosi has tried to undermine and humiliate him at every turn and that he will never forgive her for impeachment, according to two White House aides and Republicans close to the West Wing who spoke on condition of anonymity because they were not authorized to publicly discuss private conversations.

Days before Trump was acquitted by the Senate, the two leaders came face-to-face on-camera before the president's State of the Union speech. Pelosi reached out her hand in a gesture that was more like a dare. Trump ignored the outreach and started his speech.

And then, before Trump had left the podium, Pelosi ripped up a copy of his address on camera. She held it up for her allies and her family to see and took a little bow.

The coronavirus has proved disproportionately deadly for older Americans; Pelosi turned 80 last week, while Trump is 73. But neither has slowed down their public schedule, and neither has stopped sniping at the other.

"I don’t know what I would learn in a conversation with the president," Pelosi said this week.

The next day, Trump deemed Pelosi’s criticism “a sad thing” during an interview on “Fox & Friends.” He added: “She’s a sick puppy, in my opinion."