Tokyo Games may send even more international players to NBA 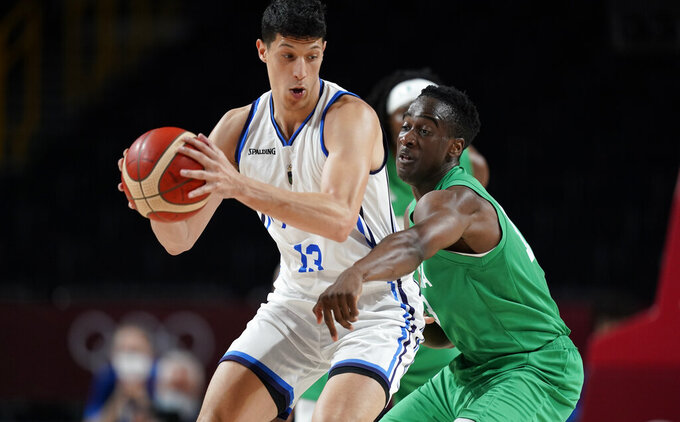 SAITAMA, Japan (AP) — There were 49 NBA players at the Tokyo Games when the Olympics started.

The San Antonio Spurs agreed to terms with Australia center Jock Landale to a two-year contract on Wednesday — one day before Spurs coach Gregg Popovich, the coach of the U.S. men’s national team, faces Landale and the Australians in the Olympic semifinals.

“One of the hardest workers in the game just kept getting better until he was inevitable,” Landale’s agent, Sammy Wloszczowski of SIG Sports, wrote on Twitter.

Landale going to the Spurs adds another interesting subplot to the U.S.-Australia semifinal. The primary one might be this: Patty Mills, who was the longest-tenured current Spurs player for Popovich before agreeing to sign with the Brooklyn Nets this week, is the starting point guard for the Boomers. Mills' decision, first reported by ESPN, was confirmed to The Associated Press by a person with knowledge of the agreement.

“He’s obviously meant a great deal to me for a very long time,” Mills — who has yet not addressed the decision to join the Nets specifically, instead insisting his focus remain on Australia's Olympic quest — said on Tuesday of Popovich.

Landale wasn’t an unknown entity to NBA teams before Tokyo.

He had been part of summer league before and had tried in the past to get into the NBA, but his play in these Olympics made it clear that his game would fit in the U.S. He’s shooting 55% in the Olympics, sixth-best in the tournament, while making half his 3-point tries and tying for the free-throw percentage so far after shooting 11 for 12 there.

“There’s a lot of really good players in it all started in ’92, with the Dream Team,” USA Basketball men’s national managing director Jerry Colangelo said. “For some reason, that exposed the game in a way that never had been done before, and international players started really dreaming about making it to the NBA.”

Of the four teams and 48 players left in the Olympic men’s field, there are 32 with current or past NBA ties — all 12 from the U.S. roster, eight from Australia, eight from France and four from Slovenia.

“At the end of the day, it just shows our game is becoming more international,” U.S. center Bam Adebayo said.

And Landale might not be the only player to reach the NBA from the Tokyo Games, either. There are plenty of players who aren’t wearing the USA Basketball uniform that are, or should, be getting noticed.

A look at some who could be headed to the NBA sooner than later:

The 25-year-old averaged 19.3 points in his four games at these Olympics, leading the Italians to the quarterfinals. A 6-foot-8 wing, Fontecchio has flirted with the NBA before, had a draft workout with Boston before not getting selected in 2015, and hasn’t ruled out leaving Europe.

“I just think it’s all about opportunity to show your potential,"Fontecchio said. “Right now, I’m happy where I am ... but the future, you never know what’s going to happen,”

Slovenia’s center was born in New York, went to high school in New Jersey, played college basketball at Virginia and he played two games in the NBA for Charlotte in 2017. Tobey is the leading rebounder in these Olympics at 12.5 per game and has clicked perfectly with Luka Doncic to help Slovenia to an undefeated summer so far.

“I really enjoy playing in Europe as well,” Tobey said. “I play for a great team in Spain, Valencia. I love it there. It’s like a second home. If the (NBA) opportunity presented itself one day, absolutely, but right now I love my home.”

Another big man who has been great in Tokyo, Kay is shooting 71% on 2-point shots in Australia’s first four games, 78% inside the restricted area and has some range — all but a requirement right now in the NBA game.

He played college basketball in the U.S. for Division 2’s Metro State and turned 29 on Tuesday.

In the 3-point era of the NBA, Obst might be able to slide right in. He took 35 3’s in Germany’s four games at the Olympics; through the quarterfinals, only Damian Lillard of the U.S. and Mills attempted more 3’s per game than Obst.

He has two things that can’t be taught: height and touch. The 7-foot-1 Balvin shot 69% in these Olympics and showed a knack for getting to the offensive glass. The question for the 28-year-old is range, but if a team is looking for a pure post player Balvin — who had summer league experience seven years ago — might be worth consideration.