At Tokyo Olympics, a debt to 'Back to the Future' and 'E.T.' 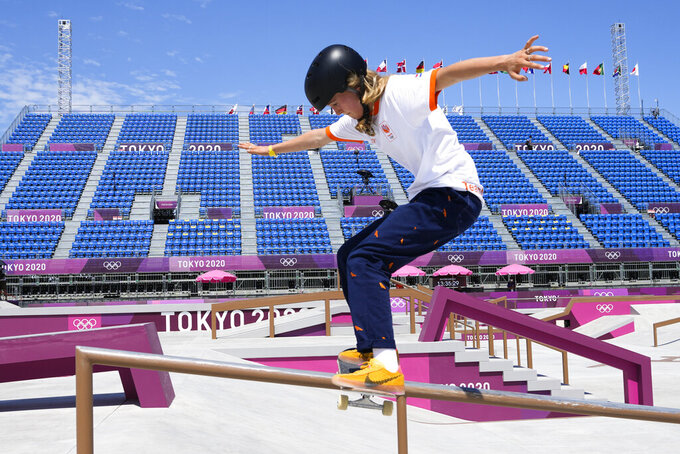 TOKYO (AP) — Although the name Marty McFly won't be on the start list for the first Olympic skateboarding competition, the “Back to the Future” character who inspired the immortal lines “What's that thing he's on? It's a board, with wheels!” was a landmark personality for the sport in its groundbreaking journey to the Tokyo Games.

The Olympic debut in Tokyo of BMX freestyle also owes a debt to Hollywood, because it was Steven Spielberg's movie “E.T. the Extra-Terrestrial" that showcased the acrobatic sport's wow factor to mainstream audiences.

So Tinseltown, take an Olympic bow. Skateboarding starts Sunday with the men's street competition. The men and women's medal events in BMX freestyle are on the second Sunday, Aug. 1. Back when the movie blockbusters hit screens in the 1980s, McFly would have needed a time-traveling DeLorean to foresee that these counterculture activities would be welcomed into the Olympic extravaganza unfolding in Tokyo.

“The skateboard associations and the BMX associations should be giving Bob Zemeckis, myself and Steven Spielberg lifetime achievement awards,” joked “Back to the Future” screenwriter Bob Gale in an interview with The Associated Press ahead of the competitions.

Gale co-created and cowrote the hit series with director Robert Zemeckis. They imagined McFly as a skateboarder to help make the character — played by actor Michael J. Fox — stand out.

“Marty McFly was always supposed to be kind of this rebellious kid," Gale recollected. "We thought it was appropriate that he might still be using the skateboard or may have decided to use a skateboard because everybody told him not to.”

In one of the movie's signature scenes, McFly uses a makeshift skateboard to outrun and outfox the villainous Biff Tannen. McFly soars on his board over a hedge and races around a town square, sparks flying. Biff and his gang of bullies are humiliated, ending up neck-deep in dung after crashing into a manure truck.

Skateboarding pioneer Tony Hawk was 17 and already a pro when the time-travel movie was released in July 1985. He credits "Back to the Future" for luring a whole generation of kids to skating.

“There are plenty of legendary pros that I know of that started skating because they saw that,” Hawk said in an AP interview.

Skateboarding featured again as an outcast activity two years later in “Police Academy 4: Citizens on Patrol." Hawk was part of the stunt crew that skated around downtown Toronto performing jumps and tricks for that movie.

“Back to the Future” was also pivotal for Josh Friedberg, the CEO of USA Skateboarding, who is leading the U.S. team of 12 skaters in Tokyo. The movie and a friend's return to their Kansas hometown from Florida with a skating video and a board all combined to hook Friedberg for life.

“My head exploded,” he said in an AP interview. “I fell in love with skateboarding that summer and there are billions of kids my age (for whom) the same exact thing happened.

“That movie was fascinating to me as a 13-year-old, with Michael J. Fox skating on his tail and making sparks and escaping the bad guys," Friedberg added. “There is an entire generation of skateboarders that are the 'Back to the Future' generation."

For the movie's makers, long before skateboarding was Tokyo-bound and plastered all over the internet and social media, one of the challenges was finding skaters good enough to carry the scenes.

“The stunt guys didn't know how to skateboard,” Gale recalled.

The hunt took him on a Sunday morning to Los Angeles' Venice Beach, a cradle for the skating culture that Olympic organizers now hope will entice young audiences to tune in to Tokyo.

"Sure enough, there were these two guys that were just doing these outstanding skateboard tricks," Gale said. “So I went up to them and I said, ‘I know you are going to think that I am full of it, but I am actually producing a movie and I need a couple of guys.’"

Freestyle BMX pioneer Bob Haro had a similar experience: An out-of-the-blue phone call offering him work as a stuntman on “E.T.," released in 1982.

Among those inspired by Spielberg's blockbuster about a stranded alien was future Olympic track cycling champion Chris Hoy. Then only 7, Hoy was instantly smitten by its thrilling chases and took up BMX racing before later switching to track, where his six gold medals made him Britain’s most decorated Olympian.

In the movie's climactic chase scene, Haro jumped his BMX bike onto the roof and hood of a police vehicle, knocking off its flashing red light.

“It turned, again, millions of kids onto BMX," Haro said in an AP interview. “Really great timing, too, because the sport of BMX was blowing up at that time and they capitalized on it in a good way.

“For the younger generation, a lot of them, that's a long time ago," he acknowledged. “They are having their moment, which is great.”