Tokyo Olympics face another problem because of its president 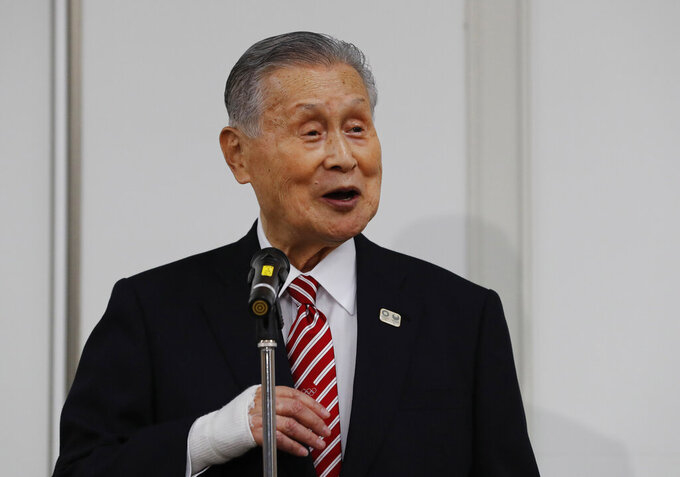 TOKYO (AP) — The postponed Tokyo Olympics have yet another problem besides the pandemic. This time it’s Yoshiro Mori, the president of the local organizing committee.

Mori made derogatory comments about women almost a week ago in a meeting of the Japanese Olympic Committee. He essentially said they talk too much, driven by a “strong sense of rivalry.”

The 83-year-old former prime minister was forced to apologize, but calls for his resignation persist. They seem to grow daily, cutting into weakening support for the Olympics and raising questions why elderly men dominate politics and boardrooms in Japan.

The local organizing committee issued a vague statement on Sunday saying it supports diversity. The committee is also heavily dominated by men with few women in any leadership roles.

Mori has been the continuing topic of talk and news shows, which point out that the World Economic Forum ranks Japan 121st of 153 countries in gender equality. This contrasts with Japan's image as a sophisticated, developed country and the home of some of the world's most famous and trusted brands.

Mori's future could come to a head in a matter of days with reports that local sponsors are upset. They have contributed a record $3.5 billion to the Tokyo Games.

Widely circulated reports in Japan say the organizing committee's executives will meet this week to discuss his fate.

Toshihiro Nikai, the 81-year-old general secretary of the party, criticized several hundred games' volunteers who said they are dropping out as protest.

“If they do want to quit no matter what, we have to recruit additional volunteers," Nikai said Monday.

Nikai was challenged by Taro Aso, the 80-year-old deputy prime minister and a former prime minister himself. Aso is also a former Olympian and said Nikai showed a “lack of respect" for the volunteers.

All the disruption could further soil Tokyo's image as it tries to pull off the Olympics in the middle of a pandemic, saddled with soaring costs that are now officially $15.4 billion but believed to be much higher.

The Switzerland-based International Olympic Committee quickly accepted Mori's apology last week and published a further statement on Tuesday seeking to shore up its own credentials on gender equality.

Mori's opinion was “absolutely inappropriate and in contradiction to the IOC’s commitments,” said the Olympic body, whose own executive board has one-third representation of women — five of 15 members.

“Over the past 25 years, the IOC has played an important role in promoting women in and through sport, and it will continue to do so by setting ambitious targets,” it said.

Mori was appointed under former Prime Minister Shinzo Abe, has been backed by the current prime minister, and has built strong ties with IOC President Thomas Bach.

Bach has called Tokyo the “best prepared Olympics in history" and has repeated the compliment even as it tries to hold the most difficult games on record.

The IOC needs the Olympics to take place. Almost 75% of its income is from selling broadcast rights. Unlike other sports businesses, it has only two major events to sell — the Summer and Winter Olympics.

Tokyo and the IOC plan to welcome 15,400 Olympic and Paralympic athletes in just under six months, keep them in a “bubble,” and limit their contact with media, fans, judges and officials.

An on-line petition was reported Monday to have gained 140,000 signatures. It does not ask for Mori's resignation, but asks officials to address his behavior.

Japanese news agency Kyodo reported that its weekend poll showed almost 60% believe Mori is not qualified for the job. He has headed the organizing committee since 2014.

The Olympics are scheduled to open on July 23 but polls show about 80% of the Japanese public believe they should be canceled or postponed again. The IOC has said they will be canceled if they cannot be held this time.

In a radio interview on Sunday during the Super Bowl, U.S. President Joe Biden said he hoped the Olympics would take place for the good of the athletes.

“I’ve spoken with the prime minister of Japan," Biden said. "He’s working very hard to be in a position to safely open the games, to have the games, and I think that has to be based on science, whether or not it is safe for that to occur.”