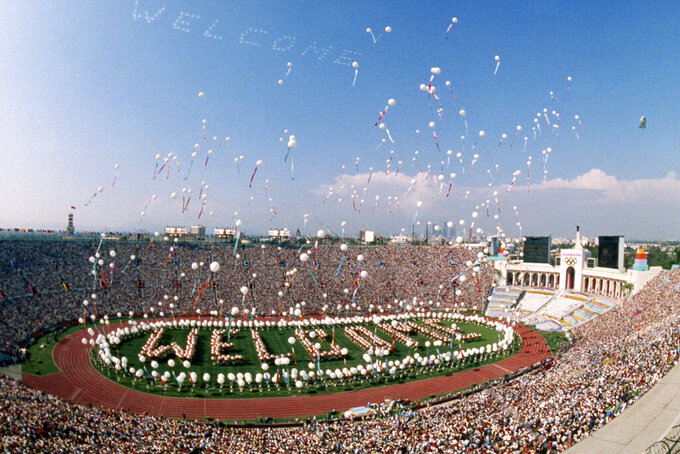 FILE - In this July 28, 1984 file photo, balloons are released into the air from the field of the Los Angeles Memorial Coliseum as part of the opening ceremony for the Summer Olympic Games in Los Angeles. Track is a niche sport in the United States when it comes to the fan base, even while the country hosts its first track world championships. They say that with sagging viewership totals and flat revenue across the broader Olympic world, it's critical to bring the cornerstone sport of the games back to its glory days in the U.S. before they return to Los Angeles in 2028. (AP Photo/Dave Tenenbaum, FIle)

EUGENE, Ore. (AP) — When international track and field officials wanted to place their world championships in the U.S. for the first time, the running mecca that embedded Nike into American culture was the easy choice.

But pictures of half-empty stands in a sparkling new 25,000-seat track stadium in Eugene, Oregon, and readouts of TV ratings that didn’t beat a routine NASCAR race re-emphasized a decades-old reality: When it comes to spectating, not competing, track is a niche sport in the United States.

Track and field's leaders would like that to change over the next six years, especially in view of sagging viewership totals and flat revenue across the broader Olympic world. It's critical, they say, to bring the cornerstone sport of the Summer Games back to its former glory in the U.S. before Los Angeles hosts in 2028.

“For the games to really work, the U.S. needs a really powerful track and field presence,” World Athletics president Sebastian Coe said. “You have the best athletes in the world. You have all those other assets. And we have to make sure that people understand a whole heap more about our sport by the time we get to 2028.”

The U.S. entered the last day of worlds with 28 medals and is almost certain to break its world-championships record of 30. And yet, track is, at best, the eighth most popular sport in the United States, according to research commissioned by World Athletics. Coe said he'd like to get it into the top four — more in the realm of the NBA and baseball.

These discussions are similar to the hand-wringing that plays out in U.S. soccer circles during World Cups. If the U.S. teams are successful and millions of people play recreationally, what would it take for this to become more than a niche sport for fans?

“You've got to go to where the young people are. And the base of your sport, you've got to go where those people are, too,” said Sheryl Shade, a longtime agent in the Olympic space, while noting the relatively light social media presence of track athletes and a dearth of human-interest stories connected to this year's worlds.

There is a potential audience out there. A Sports & Fitness Industry Association study estimated 50 million Americans (about one-seventh of the U.S. population) are runners.

The National Federation of State High School Associations says there are nearly 1.1 million students participating in track — more than the 1 million playing football — and nearly 500,000 in cross country. And that doesn't account for the sizable number of kids who run, but aren't on high school teams.

“You have to look at the assets you have and figure out how to pour gas on them," said marketing expert Joe Favorito. "You have to make sure you're showcasing personalities, and make sure everyone's doing it. More than the TV ratings, my question would be, what's the TikTok strategy, and how are people measuring that?”

There is no Usain Bolt-like personality on the horizon for the U.S., save the tantalizing possibility of the gregarious 200-meter champion Noah Lyles.

The newly crowned 100-meter champion Fred Kerley is a seemingly likeable character with a remarkable backstory — raised with 12 other kids by his aunt, who stepped in after Kerley's parents encountered troubles. But he has done little traditional media and his social media posts leading into worlds were mainly a string of one-liners: “Let's get it,” and “Yessir.”

In an Instagram video posted shortly after his victory, Kerley declared himself “ the greatest of all time ” to his 134,000 followers. Bolt, retired for five years, has 11.5 million followers.

Sydney McLaughlin is a once-in-a-lifetime athlete who shattered her own record in the 400 meter hurdles on Friday and is the Olympic and national champion. McLaughlin is 22 — some 10 years younger than Allyson Felix when she broke out of her shell and became a vocal advocate for women in sports — and has mostly chosen to let her hurdling to the talking.

Moses said the personalities now are a far cry from the 1980s and ’90s, when outsized personalities such as himself, Carl Lewis, Evelyn Ashford and Florence Griffith-Joyner could often be seen on the track during the day and on Johnny Carson's show at night.

Moses believes a flaw today is that top runners set their schedules based not on where they can go head to head against the best competition, but on where ranking points and appearance fees are available. Those venues are rarely, if ever, in the U.S.

“Eugene is great, but the stadium is a couple years old, and it's already had one of everything,” Moses said of the national championships, Olympic trials and world championships that have been held in Oregon. “I don't think track and field is going to be big until they restore it in Los Angeles, and that becomes the track and field capital of the country."

LA will be the track capital of the world for 10 days in 2028. And Casey Wasserman, the chairman of the organizing committee for those Olympics, is well aware of the importance of bumping up track’s profile.

“The American market is such an important economic and fan market for them,” he said of the sport. “They need to come to the States with their biggest events and their most important athletes.”

Los Angeles will mark only the second time this century that the Summer Games have been in a U.S. time zone, which might generate more buzz and viewers despite the realities of the growingly fractured TV audience. While the IOC has a multibillion-dollar TV deal with NBC locked in through 2032, the ratings from last year's Tokyo Games and the Winter Olympics earlier this year in Beijing were abysmal.

In Colorado Springs, Colorado, the home of the U.S. Olympic and Paralympic Committee, there's a growing awareness that things are not the way they used to be.

“We saw a troubling trend toward people being less engaged with the games," chair Susanne Lyons said in a recent interview. “And, to me, that is the ultimate issue. Because if people are not engaged with the games, they don’t watch, then sponsors don’t sign up, you don’t get money and, eventually, the whole thing doesn’t work.”

NBC also did not hype track worlds nearly the way it would leading into an Olympics, and it showed in the opening-weekend ratings. The most-watched session on NBC averaged 2.24 million, which was about 160,000 fewer viewers than a NASCAR race on USA Network at the same time. The final round of the British Open, which aired in the morning and led into the track coverage, drew almost double the audience.

“The U.S. has its challenges for us, and we’ve been completely open about that,” Coe said. “But being here is really important.”