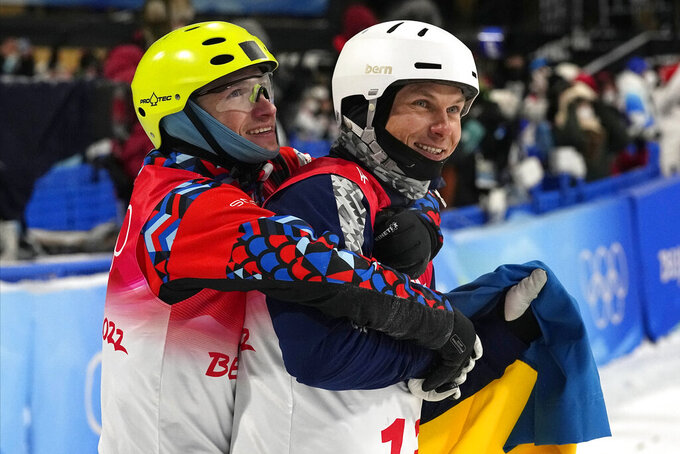 Earlier this month, Ukrainian skeleton rider Vladyslav Heraskevych flashed a sign at the Olympics: “No war in Ukraine.” On Sunday, he was hunkered down about 150 kilometers (90 miles) outside of his nation's capital with weapons nearby in case he needs to defend his country.

“I am a student,” the 23-year-old said in a phone interview with The Associated Press. “I am not experienced in these type of things. But I am ready to stand strong and help in any way I can.”

With Russian troops encircling the capital of Kyiv, Heraskevych was among a rapidly growing list of athletes from Ukraine and about two dozen other countries who sent an open letter to Olympic and Paralympic leaders, urging them to immediately suspend the Russian and Belarusian Olympic and Paralympic Committees.

“Russia’s invasion of Ukraine, supported by Belarus, is a clear breach of the Olympic and Paralympic Charters — a breach that must be met with strong sanctions,” said the letter addressed to IOC President Thomas Bach and his counterpart on the International Paralympic Committee, Andrew Parsons.

Among those putting their names on the letter were four-time Olympian Paula Radcliffe of Britain, six-time Olympian Clara Hughes of Canada, two-time Paralympian Greta Neimanas and Beckie Scott, the Canadian Olympic champion who served a long term as head of the World Anti-Doping Agency's athlete commission.

There were 34 Ukrainian athletes' names listed on the letter, many signing on behalf of their entire sports federations. The letter said more Ukrainians would have signed but “it has been a challenge to speak with all athletes from Ukraine as they are seeking safety in bomb shelters.”

“If the IOC and IPC refuse to take swift action, you are clearly emboldening both Russia and Belarus violation of international law and your own Charters,” the letter read.

The advocacy group Global Athlete helped coordinate the letter, which also was signed by sliders from the U.S., Latvia and the Netherlands, members of the Russian fencing team, an independent athletes' group from Germany and the Belarus Sport Solidarity Athletes Federation.

The International Olympic Committee has condemned Russia's invasion of Ukraine, saying it violated the Olympic Truce. It has called on international federations to cancel or move events planned in Russia and Belarus and to stop using the countries' flags and national anthems.

Neither the IOC nor the IPC have taken direct action against the countries themselves, however. The Paralympics start next Friday. Neither federation immediately responded to AP requests for comment on the letter.

Among those signing the letter was Ukrainian freestyle skier Oleksandr Abramenko, whose embrace with a Russian athlete in Beijing was caught on camera and captured headlines.

Heraskevych's “no war” banner did, too. After that gesture on Feb. 11, the IOC came out quickly and said Heraskevych would not face any sanctions for violating the Olympic rule that limits political protests on the field of play at the Games.

“This was a general call for peace,” the IOC said in a statement. “For the IOC the matter is closed."

Heraskevych told the AP he left China in mid-February with a guarded sense of optimism; at the time, Russia was amassing troops along Ukraine's border but had not invaded.

His hopes were quickly dashed. He spoke to the AP from Zhytomyr, about a two-hour drive from Kyiv. He was preparing to defend Ukraine's capital if called on.

“It’s quiet now,” Heraskevych said. “But there is no safe place in Ukraine right now.”