US boxers Davis, Torrez can get revenge, win gold medals 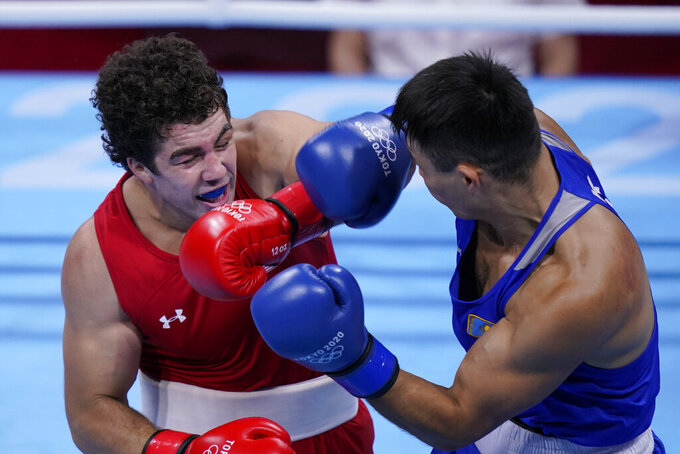 TOKYO (AP) — The Tokyo Olympics are already the most successful since 2000 for the U.S. boxing team if measured by its haul of four medals.

It's the best performance by the Americans since 1988 if measured by their three berths in Olympic title bouts.

But the most successful nation in Olympic boxing history is down to its final two chances to end the men's 17-year gold medal drought — and its two fighters in finals on Sunday are also motivated by revenge.

Lightweight Keyshawn Davis and super heavyweight Richard Torrez Jr. are both facing the top seeds in their weight classes to close the show at the Kokugikan Arena. They're both underdogs against opponents who have beaten them — and in Torrez's case, beaten them unconscious.

Davis takes on Andy Cruz, who will try to add a fourth gold medal to Cuba's Olympic-leading haul. Torrez is up against Bakhodir Jalolov Uzbekistan — the 6-foot-7, 27-year-old pro who has bruised his way to an 8-0 professional record and the gold medal bout.

Both Americans love the idea of avenging their setbacks.

“If you’re writing a script, this is the script,” U.S. coach Billy Walsh said. “You come back, go to the Olympic final, and you go beat the guy who put you on your (rear). That’s what we’re here to do.”

Davis' ever-confident demeanor didn't change when he watched Cruz advance to face him in the final.

“I feel like that’s going to be an easy fight, man,” Davis said after beating Hovhannes Bachkov of Armenia in the semifinals. “I’m bigger, faster, smarter, stronger. It showed today. Facing Cuba, I feel like it’s going to be nothing different. I’m just going to show all my attributes and I’m going to win that gold medal.”

It's not easy on paper: Davis has lost to Cruz in Nicaragua, Peru and Russia. His confidence in Japan is grounded in his improvements since turning pro this year and returning to the Olympics with more power and elusiveness.

In fact, Davis' experiences against Cruz in defeat are the reason for his confidence now.

“I learned that he doesn’t have quick feet like he used to have,” Davis said. “He stands right in front of you a lot more. I feel like that works more to my advantage, because I still use my feet. I feel like I’m still quick. I still have my speed and power. I’m just more mature.”

The final fight in Tokyo will be Torrez's rematch with Jalolov, who sent Torrez from the ring on a stretcher at the world championships in Ekaterinburg, Russia. Jalolov's massive left hand turned out Torrez's lights, but Walsh quickly put the setback in perspective.

Torrez's Olympic performance has been stellar, highlighted by a stunning victory over Dainier Pero of Cuba in the quarterfinals. Torrez then reached the final by stopping Kamyshek Kunkabayev of Kazakhstan, another bruiser nearly as intimidating as Jalolov.

“I just have this existential feeling that it’s just destiny," Torrez said. “There’s nothing else to it. I don’t know how else to put it. What is love? It’s just kind of that same thing. I’m meant to be here. All I know is that.”

Torrez does extensive visualization of his bouts before he fights them, and he formulates detailed game plans with his coaches and his father back home in central California. He feels confident all the hard work will be done before he steps in the ring in Tokyo for the biggest bout of his life.

“This guy is a formidable foe,” Torrez said. “I've been in the ring with him before. I'm here to get a gold medal.”