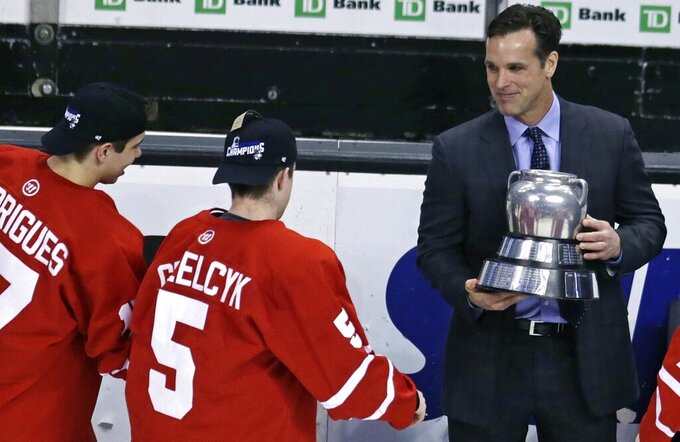 FILE - Boston University hockey head coach David Quinn, right, hands the Beanpot trophy to Matt Grzelcyk (5) and Evan Rodrigues, left, after their overtime win against Northeastern in Boston, Feb. 23, 2015. More than three decades since he was supposed to play for the U.S. at the 1988 Games in Calgary, Quinn is getting a second Olympic opportunity as the Americans' coach in Beijing. It's also a chance for Quinn to get back into coaching in the NHL after being fired last summer by the New York Rangers following three seasons dedicated to a rebuild.(AP Photo/Charles Krupa, file)

David Quinn walked into Boston University coach Jack Parker's office in the summer of 1987 and got news that destroyed his Olympic dream.

Quinn learned he was a hemophiliac and was told his hockey-playing career was over.

"It was a big blow," said Quinn, now 55. “It was devastating in a lot of ways, life-altering. People have put up with a lot worse than I have in life, that’s for sure, but at 20 years old still a tough pill to swallow.”

More than three decades since the rare blood disorder kept him from playing at the 1988 Games in Calgary, Quinn is getting a second Olympic opportunity as the U.S. coach in Beijing. It's also a chance of another kind for Quinn to get back into coaching after being fired last summer by the New York Rangers following three seasons dedicated to a rebuild.

“I really think Quinny can be a great coach in the NHL,” said veteran defenseman Brendan Smith, who played for him for three years in New York. "The situation he was put in was an unwinnable situation, really, and I’m excited for him to go over there. I think he will do a very good job."

Much of Quinn's coaching philosophy stems from his playing career and the diagnosis that took it away. He was a first-round pick of Minnesota in 1984, played on the 1986 world junior team that won the first U.S. medal in that tournament’s history and was a a top college defenseman with legitimate pro prospects.

A handful of injuries that were all blood-related pushed Quinn to get tested. Knowing how bright Quinn's future was, BU teammate and now U.S. Olympic assistant Scott Young said of the abrupt end: “Nobody saw that coming. That was just a shock to everybody.”

“After you throw a pity party for yourself, I think you try to figure out what’s next," Quinn said. He reflected on how Parker and previous coaches like Ben Smith, Larry Pietila and Peter Bragdon made up such a big part of his support system at a difficult time. He wanted to follow that same path to stay in hockey.

Quinn gave it a go for 79 more games in the minors in the early ’90s thanks to a barrage of new medications and tried and failed to make the Olympic team in 1992. With his playing career over for good, he became an assistant at Northeastern in 1993 before moving on to Nebraska-Omaha and returning to BU.

Three years as an American Hockey League coach and one as a Colorado Avalanche assistant led him back to BU as coach for five seasons before getting the job with the Rangers in 2018.

New York had launched into a full-scale rebuild before hiring Quinn, who was seen as one of the sport's up-and-coming coaching minds. He coached there for three seasons until the Rangers cleaned house, dumping president John Davidson and general manager Jeff Gorton. New head of hockey operations Chris Drury fired Quinn last summer.

“New York sent out a letter that they’re going to bring along the young guys, and at all costs,” said Smith, who's now with Carolina. "That becomes very difficult, especially in the team dynamic because then young guys can get away with making mistakes and older guys can’t and older guys get punished and then you make a divide of the room and a divide from the coaches."

Even through that, Smith and others lauded Quinn for handling the situation as best he could through clear, consistent communication. The ability to deliver messages is considered one of his biggest strengths going into an Olympics with a roster of 15 college players and 10 professionals.

“He has a pretty good understanding of where the older guys are coming from, but also as a younger guy playing in New York I felt comfortable talking with him in a 1-on-1 conversation,” said defenseman Neal Pionk, who played for Quinn in 2018-19 is now with Winnipeg. “We had a lot of young guys in New York, so he made sure it was a point that the young guys were able to go up to him and have a conversation without being hesitant.”

There is not much hesitancy about Quinn, who went right to work for USA Hockey, initially as an assistant on Mike Sullivan's Olympic staff before the NHL withdrew and thrust him into this role. Quinn visited a few training camps to observe and talk to other coaches, watched plenty of game film for scouting purposes — and could not sit still.

“He’s a constant sponge at trying to find out how to make himself better, and he’ll keep doing that,” said Davidson, now the president of hockey operations for Columbus. "He doesn’t sit around and let the moss grow underneath his feet. He’s a goer in a very good way.”

“He’s a very good hockey coach. He’ll get another job eventually," he said. “I think this is a great opportunity for him to go on a big stage and show what he can do.”

That could be as soon as next season, depending on how the U.S. plays and the coaching carousel around the NHL. But Quinn is too busy getting ready to live out his longstanding Olympic dream to worry about that.