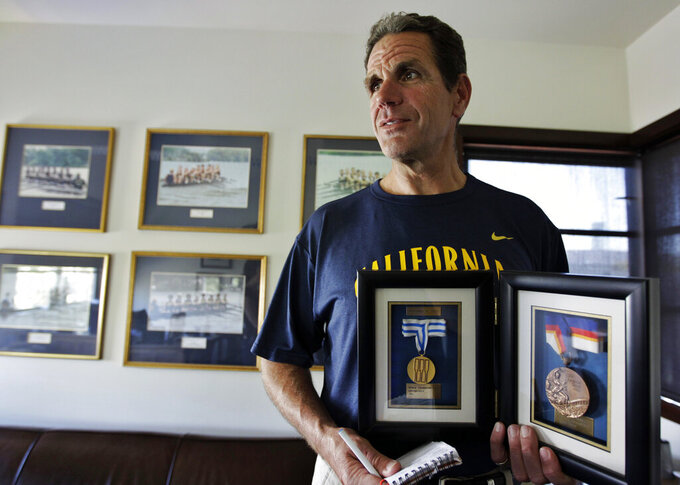 FILE - In this May 7, 2012, file photo, coach Mike Teti displays the bronze medal from the Seoul Olympics and the gold medal from the 1987 World Championship in Copenhagen in his office in Oakland, Calif. Longtime U.S. rowing coach Teti, who has been criticized by some of his former team members as being emotionally abusive and using physical intimidation, has resigned but immediately accepted a position funded by a large donor leading a new high-performance training club ahead of the 2024 Olympics in Paris. (AP Photo/Paul Sakuma, File)

OAKLAND, Calif. (AP) — Longtime U.S. rowing coach Mike Teti, who has been criticized by some of his former athletes as being emotionally abusive and using physical intimidation, has resigned but immediately accepted a position funded by a large donor leading a new high-performance training club that still has ties to the national program.

The Associated Press in July reported that American rowers under Teti feared his intense and intimidating style. An announcement from US Rowing CEO Amanda Kraus on restructuring within the program did not address the allegations but rather the need for immediate change after the U.S. team failed to win any medals at the Tokyo Summer Olympics.

Kraus, who took over in November 2020, said there will no longer be a formal relationship with Teti and she accepted his resignation last week. She expressed the sport's commitment to new leadership and direction for the build up to the 2024 Paris Olympics.

“We are thinking about a culture that focuses more on athlete wellness, athlete care and communication, all of those things,” Kraus said Thursday in a phone interview, later adding that US Rowing “won't have any contracts with any of the high-performance clubs.”

She posted a letter on the governing body's website last Friday addressed to “national team athletes, hopefuls, partners, supporters and friends” that stated “meaningful changes need to be made in order to create an athlete-focused approach” going forward.

Nine rowers who spoke for the AP story described Teti’s intimidation — all but one discussing the situation on condition of anonymity because they either want to continue in the sport or feared retaliation — and said they have direct knowledge of the coach physically threatening athletes or verbally attacking them if they challenged him in any way.

Teti, meanwhile, was announced as head coach of elite rowers and prospects for California Rowing Club — at the same boathouse where he trained Olympians and other hopefuls in recent years ahead of the Tokyo Games.

This center, funded by the Rogers Family Foundation, will give elite rowers a choice whether to train there under Teti or with the national team. US Rowing will centralize its men’s and women’s training centers in Princeton, New Jersey, where the women’s teams were already headquartered. The center will host 12 men and 12 women as full-time residents.

Some male rowers have already relocated to the East Coast while others have indicated their plans to do so, Kraus said Thursday. US Rowing also has opened a search for a new Chief High Performance Director and also is accepting public comment through Oct. 29 on the selection process for the 2022 senior national team.

While California Rowing Club and Teti will be involved in training elite rowers who choose not to be based in Princeton, it’s unclear how much influence he will have on the makeup of the U.S. team.

In addition, US Rowing has received a 100-plus page report from an assessment begun early this year by the U.S. Olympic & Paralympic Committee into the Americans' national team programs, including the men’s group that had been based in Oakland under Teti's guidance.

“As we prepare for 2024 and beyond, it is clear that meaningful changes need to be made in order to create an athlete-focused approach that maximizes USRowing’s resources and those of the overall rowing community here in the United States,” Kraus wrote in her letter. "USRowing wants to enable our athletes to train and compete in sustainable environments that provide them with the stability and support they need to thrive over the long term.

“We are also committed to creating a system of high performance that will drive unprecedented success in our sport. In order to accomplish this, USRowing will be restructuring our national team’s staff, selection process, and training centers," she said.

In her letter, Kraus said US Rowing since March has evaluated its national team operations “and how they relate to our athletes’ pathways to success" by conducting athlete exit interviews and surveys, an internal report from the sport's High Performance Council, the USOPC assessment and input from leaders in other sports — both national and international governing bodies.

The law firm Arent Fox conducted the USOPC assessment, sending a letter in January that was obtained by the AP, that focused in part “to review whether elite athletes’ concerns are capable of being heard in a fair and neutral way that does not contribute to a fear of retaliation.”

Some athletes shared their concerns about the culture under Teti by reaching out directly to Kraus in hopes of creating change in coaching leadership.

The 65-year-old Teti, the only member of the National Rowing Hall of Fame inducted as an athlete and coach, has denied any wrongdoing, telling the AP, “I believe that I have coached fairly, with the athletes’ well-being in mind.”

Teti was investigated by the watchdog group SafeSport in 2018 and also in 2016 on behalf of the University of California at Berkeley, where he formerly coached. The SafeSport probe was closed with no sanctions and Cal never disclosed its findings.

He rowed in the U.S. eight boat that won a bronze medal at the 1988 Olympics in Seoul and coached the men’s eight to gold at the 2004 Athens Games. Four years later in Beijing, he guided the eight boat to a bronze medal before beginning a successful tenure at Cal, where he stayed for a decade. Ahead of the Summer Games in 2012, he was called in to lead the eight in qualifying for London, where the boat finished fourth.

“I am extremely grateful to the Rogers Family Foundation for creating this opportunity for our athletes. I am also excited and encouraged to see how far we can go with this group of talented young athletes," Teti said in a statement on the rowing club's website. “I believe our athlete-centered approach at the CRC, in partnership with USRowing and the restructuring of their new high-performance model, will allow each athlete to control their path to the Olympic Team."