US women's basketball to train in South Carolina next week 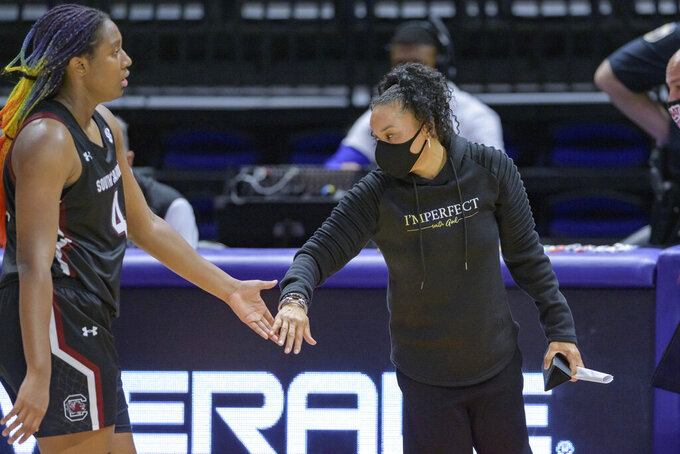 Dawn Staley is going to be busy next week.

The South Carolina coach will be pulling double duty leading the fourth-ranked Gamecocks and running a USA Basketball training camp at the school from Feb. 4-7.

“It’s been a year since we’ve been together for a training camp, and I’m excited to step back on the court with the USA National Team,” said Staley, who is also the U.S. Olympic team coach. “We’ve got a great mix of veteran leadership and younger players, most of whom know how I run practices, and I anticipate we’ll have four extremely competitive days of practice here in South Carolina. We’re missing a few pieces of the puzzle, we have 36 players in our pool, but it will be incredibly helpful in our preparations for the Olympics in Tokyo this summer.”

Staley’s college team will be playing at Auburn on the first night of the camp, so U.S. assistant coaches Cheryl Reeve and Dan Hughes will be in charge. Assistant Jen Rizzotti won’t attend because she is busy coaching her George Washington team. South Carolina assistant Lisa Boyer and Dallas Wings coach Vickie Johnson will also serve as court coaches during the four-day camp.

Four-time Olympians Sue Bird and Diana Taurasi won’t be at the camp, but veteran medalists Sylvia Fowles, Breanna Stewart and Brittney Griner will be among the 19 players in attendance. South Carolina great A’ja Wilson will also be there. She had a statue erected in her honor in front of the Gamecocks' home arena last week.

Chicago Sky guard Kahleah Copper, who isn’t in the national team pool, will attend the training session. She could be added to the pool later.

The Tokyo Olympics are set to open July 23, postponed from last year, and IOC President Thomas Bach and local organizers pushed back last week against reports that the Games would be canceled. The U.S. has won six consecutive Olympic gold medals.