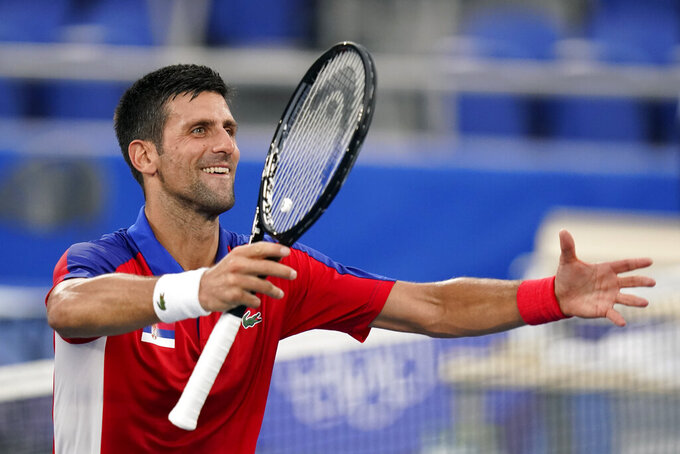 Novak Djokovic, of Serbia, gestures after defeating Jan-Lennard Struff, of Germany, in the second round of the tennis competition at the 2020 Summer Olympics, Monday, July 26, 2021, in Tokyo, Japan. (AP Photo/Patrick Semansky)

TOKYO (AP) — There he is doing the splits with the Belgian gymnastics team. Offering mental strength advice to Turkey’s volleyballers. Screaming wildly with a roomful of teammates when a fellow Serb wins gold in taekwondo. Posing for pictures with South African field hockey players — and many more Olympians from far and wide.

Novak Djokovic is going full immersion on the Olympic experience at his fourth Games.

“I’m just trying to enjoy every second,” Djokovic said. “You’re staying in the village with 10,000-plus athletes, exchanging knowledge, experiences, about life, about sports; and you don’t get to have that kind of experience anywhere else.

“Being an individual athlete like we are in tennis I’m trying to be really grateful for that and thrive on that and take as much positive energy from it as I can,” Djokovic added. “It’s really been a phenomenal time for me.”

So far, Djokovic has had no problem transferring the energy to the tennis court.

A 6-3, 6-1 win over 16th-seeded Alejandro Davidovich of Spain on Wednesday put Djokovic in the quarterfinals of the Tokyo Games tournament and also kept alive his bid for a Golden Slam.

Steffi Graf in 1988 was the only tennis player to achieve the Golden Slam by winning all four Grand Slam tournaments and Olympic gold in the same calendar year.

Djokovic has already won the Australian and French Opens plus Wimbledon this year, so now he needs the Tokyo Games title and the U.S. Open trophy to complete the unique collection.

Athletes from other sports have been quizzing Djokovic about how he maintains his mental strength.

“The first night was with Serbian female basketball players, judo athletes and from different sports. They were very interested to ask me about the mental strength and how to deal with pressure and what are the techniques and what are the ways to really understand how to bounce back if you lost your focus in that moment while you’re performing," Djokovic said. "So I talked about that a lot. But I’m going to keep it a secret just for athletes. Athletes only.”

Djokovic also shared his tactics with partner Nina Stojanovic in the opening round of the mixed doubles tournament. A 6-3, 6-4 win over Marcelo Melo and Luisa Stefani of Brazil put them into the quarterfinals of that event, too.

This being the Olympics, victories in the quarterfinals mean spots in the medal rounds. Djokovic’s only medal was bronze in singles from his first Olympic appearances at the 2008 Beijing Games.

Having won Wimbledon this month to match Roger Federer and Rafael Nadal with his 20th Grand Slam title, Djokovic was the only member of the Big Three to travel to Tokyo.

Federer won Olympic gold in doubles with Swiss teammate Stan Wawrinka in 2008 while Nadal has won gold in both singles (in 2008) and doubles (in 2016 with Spanish partner Marc Lopez).

Another medal for Djokovic would be the perfect reason for more Team Serbia celebrations in the athletes village.

Although, to be perfectly clear, Djokovic doesn’t always stay overnight in the village.

“I’m kind of between the hotel and village. But I’m spending every single day in (the) village,” he said. “Hotel is mostly for sleeping over and having my own routine in the morning. But other than that I’m always in the village — because it’s just so special.”