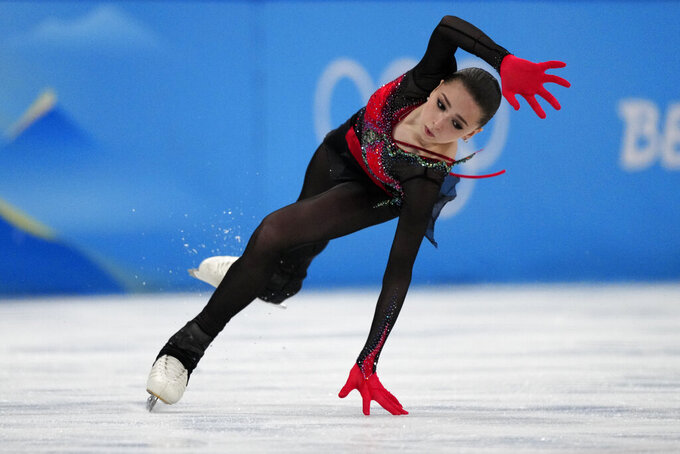 FILE - Kamila Valieva, of the Russian Olympic Committee, falls in the women's free skate program during the figure skating competition at the 2022 Winter Olympics, Thursday, Feb. 17, 2022, in Beijing. No 15-year-old figure skaters will be allowed to compete at the 2026 Olympics following the controversy surrounding Russian competitor Kamila Valieva at this year's Beijing Games. A new age limit for figure skaters at senior international events was passed Tuesday, June 7, 2022 by the International Skating Union in a 110-16 vote that will raise the minimum age to 17 before the next Winter Olympics in Milan-Cortina d’Ampezzo, Italy. (AP Photo/Bernat Armangue, File)

Three Russian canoeists, including a 2012 Olympic champion, were banned by the Court of Arbitration for Sport on Friday for their part in a state-backed doping program eight years ago.

WADA prosecuted the case using evidence it received from a Moscow laboratory that had been manipulated and withheld by Russian authorities for several years.

WADA has also given Moscow lab data to about 40 other sports bodies since 2019 and now wants some of them to review those cases after the evidence held up in court.

“It creates a precedent. If they have the similar kind of evidence available they should prosecute the cases,” WADA director general Olivier Niggli told The Associated Press on Saturday.

He spoke on the sidelines of a WADA annual conference where the Moscow lab affair was described as the “biggest and most complex investigation in world sports” that cost millions of dollars.

WADA has doubted some governing bodies’ commitment to investigating the Russian athletes, who have mostly retired from competing.

The latest cases were judged at CAS only after WADA appealed against the International Canoe Federation’s refusal to prosecute using the evidence provided.

Niggli suggested “there may be one or two” Olympic sports which should reopen cases against Russian athletes.

The Russian doping program led to widespread cheating at the 2012 London Olympics and a notorious sample-swapping scheme at the 2014 Sochi Winter Games to cover up doping with anabolic steroids.

WADA asked Russia to hand over a clean version of the Moscow database in 2018 to seek closure in the scandal. Russian tampering of the data led to a CAS ruling that banned the team name, flag and anthem from the Tokyo Olympics last year and Beijing Winter Games in February.

In the canoeing cases, just the CAS verdict was given Friday. The judges’ detailed reasons specifying which evidence was persuasive is due to be published within weeks.

That pending document should help other sports decide how to prosecute their own cases, Niggli said.

In other Russian issues discussed Saturday, WADA said reliable testing of athletes there continued despite fallout from the country’s war on Ukraine. Russian athletes are also banned by most sports from competing abroad where they could be tested.

Anti-doping officials in Russia are still able to ship samples to Turkey and elsewhere for testing, and transfer money to pay labs for the work, Niggli said.

The highest-profile current Russian doping case involves figure skater Kamila Valieva, whose positive test for a banned heart medication was belatedly revealed during the Beijing Olympics. She was cleared to skate as the gold medal favorite but an error-filled program dropped her to fourth.

Niggli said a target date in early August for Russian anti-doping agency RUSADA to complete its investigation is “not a hard deadline. There are procedural reasons that it sometimes takes more time.”

The Russian verdict can be challenged at CAS by WADA if it is not satisfied with the ruling or the integrity of the investigation.