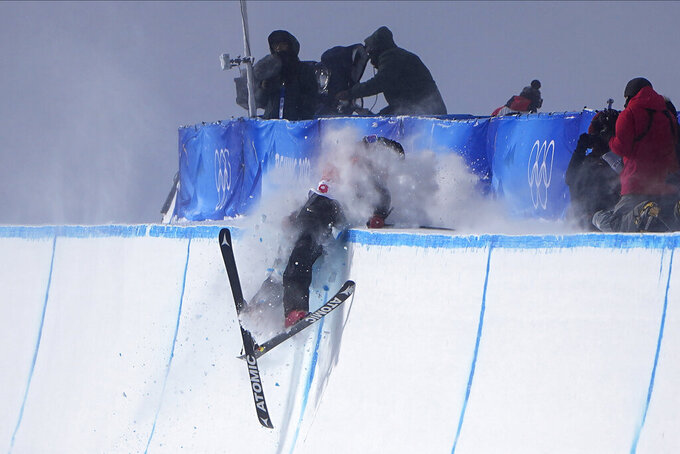 They forged ahead in the halfpipe, and that turned into a full-blown mess.

With the Winter Games whipping toward their finish, Mother Nature swirled up something fierce in the mountains around Beijing on Saturday. Gusts up to 40 mph (65 kph) prompted delays and disarray at several outdoor events, with wind chills down to minus 26 degrees Fahrenheit (minus 32 degrees Celsius) making Olympians miserable on the penultimate day of competition.

Mikaela Shiffrin’s hopes for a medal-worthy ending at what has been a maddening Games for her were pushed back a day when the mixed team parallel event was postponed. The men’s 50-kilometer cross-country ski race, meanwhile, was delayed and then trimmed to 30 kilometers.

Men’s freestyle skiers went off as scheduled at the halfpipe, but hardly as planned. Riders toned the difficulty of their runs way down, and still several of them suffered terrifying falls due to the gusty conditions.

“I had so much prepared,” American silver medalist David Wise said. “It’s like I cooked a meal for everybody and I didn’t get to share it.”

Chaos cropped up indoors, too. Defending champion Nana Takagi crashed out of the mass start semifinals, the second time the Japanese speedskater fell while leading a race in Beijing. Takagi stumbled and her left hand touched the rinkside padding before she slid on her side into the outer padding.

Nico Porteous of New Zealand was thrilled to escape the halfpipe with a men’s freestyle skiing gold. Bronze winner Alex Ferreira was happy to escape at all.

Porteous hit his head while trying a double-cork 1440 on his final run. Earlier, he had executed two 1620-degree spins — one spinning to his right, the other to his left — that was good for a score of 93 and a lead nobody was going to overcome.

“Bit of a stupid decision to do that,” Porteous said of the final trick, which drew blood on his right ear. “But it’s the Olympics. So you’ve got to leave everything out there.”

Snow pellets and clouds sporadically infiltrated the halfpipe, and some skiers suggested the contest would have been called off had it not been at the tail-end of the Olympic schedule, with no backup days available.

“Pretty gnarly,” said Gus Kenworthy, the 2014 silver medalist, who finished eighth despite taking one of the hardest falls when he slammed his back into the deck.

Shiffrin, a two-time gold medalist, has gone 0 for 5 hunting another medal in Beijing but is hoping to nab one in her sixth race, a team event making its second appearance at the Winter Games. Shiffrin’s haul from past Olympics includes two golds, but her best showing in five individual events in Beijing was ninth place in the super-G.

Wind led to the announcement of two one-hour delays for the mixed team event before the International Ski Federation eventually said it would not be possible to hold the competition at all on Saturday.

About 75 minutes later, after what the ski federation called a meeting “to discuss the potential rescheduling of the event,” the race was shifted to Sunday at 9 a.m. — 11 hours before the closing ceremonies.

Sui Wenjing and Han Cong of China captured the gold medal that eluded them by a razor-thin margin four years ago, this time winning the pairs figure skating program by nearly as narrow an edge at the Beijing Games.

The two-time world champions, buoyed by the support of a carefully selected crowd of Chinese supporters, scored a world-record 239.88 points to edge Russian pair Evgenia Tarasova and Vladimir Morozov by 63 hundredths of a point.

Sui and Han had to settle for silver at the Pyeongchang Games by 43 hundredths of a point.

China got its ninth gold medal at the Beijing Games, nearly double its previous Winter Olympic best of five.

Laura Nolte and Mariama Jamanka added to Germany’s record haul of Olympic sliding medals, while Elana Meyers Taylor of the United States extended her medal record with a bronze.

Nolte drove to gold and Jamanka won the silver, pushing Germany to eight gold medals in nine sliding events in Beijing. That’s more than any nation has ever won in sliding at any Olympics.

Meyers Taylor, in possibly her last race, grabbed the bronze for the fifth medal of her Olympic career. That’s more than any Black athlete in Winter Olympic history. It’s also the most by any women’s bobsledder and two more than any other Olympic bobsledder, male or female, has won for the United States.

Alexander Bolshunov sprinted to his third Olympic gold medal in a 30-kilometer mass start cross-country ski race that was rescheduled and shortened because of the wind and cold.

The Russian was part of a five-man breakaway in the final kilometer. He pushed ahead on the final climb into the stadium, taking the title in 1 hour, 11 minutes, 32.7 seconds. Russian teammate Ivan Yakimushkin crossed the line 5.5 seconds behind for silver, and Simen Hegstad Krueger of Norway took bronze, seven seconds behind.

Irene Schouten of the Netherlands captured her third gold medal of the Beijing Olympics, chasing down Canada’s Ivanie Blondin to win the women’s mass start.

In the final speedskating event of the Winter Games, Schouten established herself as the biggest star at the Ice Ribbon with a furious push to overtake Blondin. Blondin grabbed the lead on the backstraight, but Schouten roared back with an all-out sprint to the finish line to win by 0.06 seconds.