Without the NHL, Russia emerges as favorite for Olympic gold 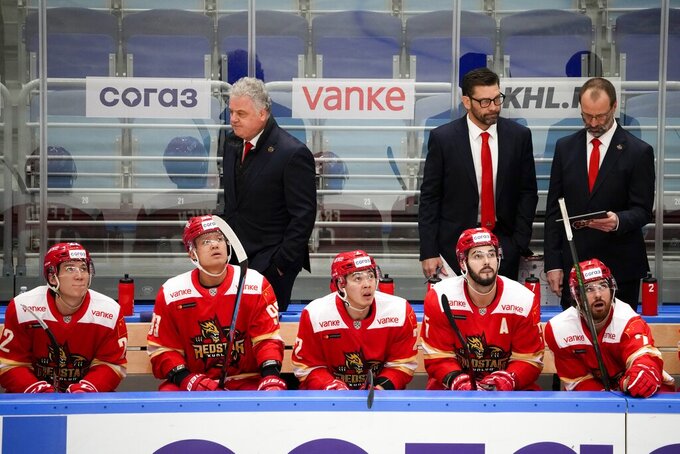 FILE - Kunlun Red Star Beijing players look at a scoreboard during the Kontinental Hockey League ice hockey match between Kunlun Red Star Beijing and Amur Khabarovsk in Mytishchi, just outside Moscow, Russia, Monday, Nov. 15, 2021. China will take part in the men’s hockey tournament at the upcoming Winter Olympics in Beijing after initial concerns that the team would be embarrassed on home ice against NHL-level competition. (AP Photo/Alexander Zemlianichenko, File)

Russia, OAR, ROC — whatever the name, now that the NHL is out of the Beijing Olympics, the Russians will be the favorites for the gold medal.

After the NHL withdrew from the Beijing Olympics on Wednesday to save a league schedule ravaged by virus outbreaks on numerous teams, Europe-based players are set to dominate the Olympic men’s tournament.

That puts the Russians, competing in Beijing as ROC for Russian Olympic Committee, in a strong position to retain the gold medal it won in 2018 under the Olympic Athletes from Russia name. The name changes were required as part of Russia's sanctions for various doping-related issues across multiple Olympic sports.

Just as it was four years ago, the Kontinental Hockey League remains the strongest league outside of the NHL. Russia has used the big-spending SKA St. Petersburg and CSKA Moscow clubs to keep some talented younger Russians at home when they might otherwise have moved to North America.

The Russian roster will be less familiar to North American fans than the 2018 lineup led by Pavel Datsyuk and Ilya Kovalchuk, who haven't officially retired but haven't played any hockey this season. Kovalchuk may be in Beijing in a manager role for the Russian Hockey Federation. Some 2018 gold medalists are now in the NHL, including Minnesota Wild forward Kirill Kaprizov, Ottawa Senators defenseman Artem Zub and two of the three goaltenders: the New York Rangers' Igor Shesterkin and Islanders' Ilya Sorokin.

Expect center Vadim Shipachyov, briefly of the Vegas Golden Knights in 2017-18, to star for the ROC. He has 21 goals and 36 assists in 40 games in the KHL this season for Dynamo Moscow. Experienced forward Mikhail Grigorenko is available because he moved back to Russia this season after spending 2020-21 with the Columbus Blue Jackets, and former New Jersey Devils wing Nikita Gusev is likely to make the roster, too. Former Los Angeles Kings defenseman Slava Voynov has not played in the NHL since a 2014 domestic violence arrest and subsequent suspension, but he is also considered key to Russia's plans.

The Russians can be beaten, though. Finland proved that Sunday with a 3-2 overtime win in Moscow during the Channel One Cup, a tournament used as a pre-Olympic tune-up for non-NHL players.

The game-winning goal was a bizarre one, awarded by the referees because of a penalty on a Finland breakaway facing the empty Russian net. The puck never entered the net. Finland won all three of its games in the tournament but needed overtime twice.

Former NHL players who are candidates for Finland include forwards Markus Granlund and Leo Komarov and defenseman Julius Honka. Komarov played a game for the Islanders earlier this season before agreeing to mutually terminate his contract.

Canada sent a team to the tournament too, beating Sweden but losing to Finland and Russia with a roster assembled from clubs in six different countries. Two free agents, defenseman Jason Demers and center Eric Fehr, brought much-needed experience with 699 and 652 career NHL games, respectively, and both subsequently signed with the same KHL team.

Former Montreal Canadiens coach Claude Julien is in line to be behind the bench for Canada, with ex-Arizona Coyotes captain Shane Doan the top candidate to serve as general manager.

USA Hockey could soon turn to assistant executive director of hockey operations and retired NHL goaltender John Vanbiesbrouck as GM. Former Rangers coach David Quinn is a leading candidate to get the U.S. Olympic job overseeing a roster that include some college players.

The absence of the NHL creates opportunities for a surprise medalist. In 2018, that was Germany, which took silver after a 4-3 overtime loss to the Russians in the final.

The Germans were helped by their team cohesion, with players almost entirely drawn from their national Bundesliga and familiar with each other’s play. The NHL's decision means MVP Leon Draisaitl is still waiting to represent his country at the Olympics. Germany beat Slovakia, Switzerland and a Russian “B” team in a tune-up tournament on home ice in November.

Host nation China was under pressure to prove its men’s team meets the competitive standard to play Olympic hockey. That’s less of an issue now.

China has used KHL club Kunlun Red Star as a proxy for the national team, with mostly naturalized players born in the U.S. and Canada, many of them with Chinese heritage. Kunlun is ranked last among the 24 teams in the KHL and lost two games used by the International Ice Hockey Federation to gauge its readiness.

China is drawn against the U.S., Canada and Germany in the pool stage. Without the NHL, there’s less chance of China’s games becoming record blowouts.