'Thought that was it': Runner recalls Boulder store shooting 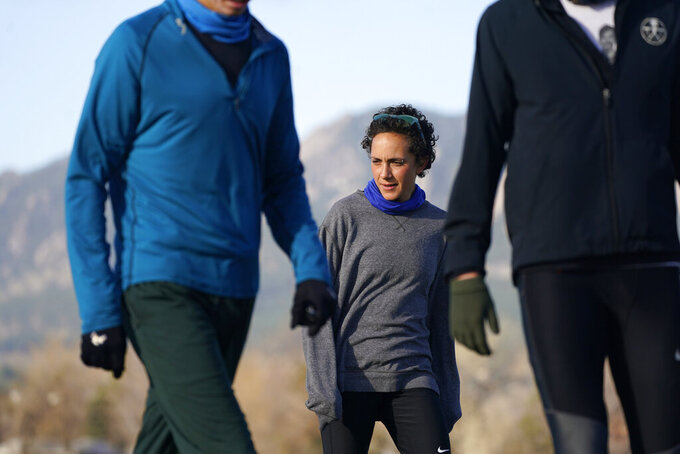 Olympic hopeful Maggie Montoya is shown as she trains with fellow runners at a park on the east side of Boulder, Colo., Friday, April 9, 2021. The Olympic hopeful was working in the pharmacy at the King Soopers supermarket in Colorado on March 22 when 10 people were killed in the mass shooting. (AP Photo/David Zalubowski)

BOULDER, Colo. (AP) — Inside a small room where she and four others were hiding from a gunman just steps away from their locked door, Olympic hopeful Maggie Montoya made a quiet and emotional phone call to her parents.

Just to tell them one last time that she loved them.

“Because I honestly thought,” Montoya softly said, “that was it.”

The 25-year-old distance runner was working in the pharmacy at the King Soopers supermarket in Boulder, Colorado, on March 22 when 10 people were killed, including a police officer, in a mass shooting.

For a harrowing hour or so, she and those with her waited in the room — growing more and more fearful that a constantly ringing pharmacy phone outside their door would betray their location — until they were escorted to safety by the SWAT team after the shooter was arrested.

The next day, Montoya was picked up by her dad and taken home to Rogers, Arkansas — to be with family and remember those who lost their lives. To escape even for a moment on long runs with her boyfriend as she trains for the 10,000 meters at the U.S. Olympic Trials in June.

To emotionally mend from that time she spent behind a metal door where she could hear everything, including the chilling voice of the gunman.

And to forget this image: Bloody footprints close to that door that she was later told likely belonged to the wounded gunman.

“Being home definitely helped me separate and work through everything that had just happened," she said.

On that Monday afternoon, Montoya was just a few hours into her shift following an exciting weekend during which she finished seventh at the USA Track & Field 15-kilometer championships in Florida.

A pharmacy tech, Montoya was helping with paperwork for customers who were receiving COVID-19 vaccinations, when she heard a loud noise. At first, she couldn’t place it.

A dropped jar in an aisle? Fireworks?

Her manager instantly recognized the sound of gunfire and yelled active shooter.

Montoya and four others ran into the consultation room that was right off the pharmacy, with a door that locked to the customer side.

“There was so much gunfire,” she recalled. “I just thought, ‘I don’t know how many shooters there are.’ We were just waiting for the moment that they were going to hop the counter in the pharmacy and be able to get into the room with us.”

She called mom and dad. She then handed her phone to her boss, who texted her husband.

As they waited, Montoya messaged her running coach, Dr. Richard Hansen, who was working nearby and provided constant updates as he watched a live broadcast.

That pharmacy phone outside their door, though. It wouldn't stop ringing.

About 20 times, Montoya estimated. Each ring made their hearts skip faster, fearing that could be the sound to alert the gunman to their presence.

One of them held a chair, just in case. It was their only defense.

Over the store’s loudspeaker, Montoya said she heard an announcement to the shooter to surrender. She said the gunman screamed his response with a closeness that startled them. It sounded like he was right outside their door.

Just before the SWAT team entered the grocery store, Hansen alerted her.

“Because it was super loud and very shocking,” she said. “If I wouldn’t have known, that would have been just really horrible to hear without knowing that it was actually the people coming to get us.”

She heard people conducting a sweep of the area, then hop the pharmacy counter and later a knock on the door — the SWAT team.

Montoya and her group — reunited with colleagues and customers — were led outside the store. On the way, Montoya spotted what was believed to be the gunman’s bloody footprints near their room.

Waiting for Montoya outside the store was her boyfriend, Jordan Carpenter. They embraced.

Hansen felt a wave of immense relief, too. He and Montoya exchanged 60 or so text messages during the ordeal.

Later, a thought hit Hansen hard: “That at any point, those messages could’ve stopped and what that would’ve meant,” he said. “It’s a pretty haunting realization.”

The following day, Montoya's father arrived and they drove home to northwest Arkansas. Just to get away and out of her apartment, which is near the store.

While there, she went on training runs she used to take in high school. She was accompanied by her boyfriend, too, so she didn't have to reflect on that day.

“I needed that time, to be at home and to be with my family,” said Montoya, who's not sure if she will work again at the store. "To be somewhere that’s familiar and just think of good memories.”

She returned to Boulder earlier this month to rejoin her teammates with the Roots Running Project and continue training for the trials. A decorated runner at Baylor, Montoya has found another gear over the last two seasons. She will be in the running to earn one of the three U.S. spots in the 10,000 meters in the Tokyo Games.

“What I hope from her moving forward, is that she’s able to find some peace with her running," Hansen said.

She recently took part in “ Run 4 Boulder Strong ” — a 10-kilometer tribute event to honor the 10 who died. The bib numbers were all the same: 80305 — the Boulder zip code of the store — and featured the names of the victims.

With Montoya in the lead group, the runners ran to the top of a path with a view of the city. There, they wrote notes to the families of the victims and first responders before heading down.

On Montoya's way back, the pack of runners coming up the road greeted her with, “Go, Maggie!”