Analysis: Plenty went wrong for US Alpine skiing at Olympics 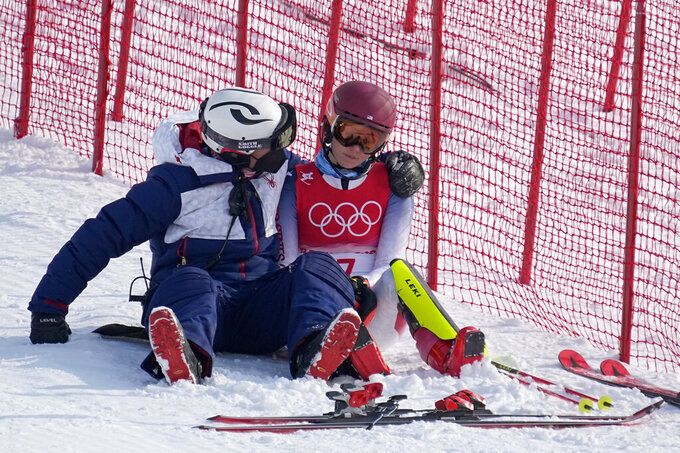 A team member consoles Mikaela Shiffrin, of the United States after she skied out in the first run of the women's slalom at the 2022 Winter Olympics, Wednesday, Feb. 9, 2022, in the Yanqing district of Beijing. (AP Photo/Robert F. Bukaty)

BEIJING (AP) — A United States team led by Mikaela Shiffrin is leaving the Beijing Olympics with just one of the 30 individual medals in Alpine skiing. And it’s a silver (from Ryan Cochran-Siegle in the men’s super-G).

The country responsible for Winter Games success stories such as Bode Miller, Lindsey Vonn, Ted Ligety and Julia Mancuso over the past two decades alone last earned just one ski racing medal at an Olympics in 1998 — and at least that was a gold. So really, you have to go all the way back to 1988, when Americans earned zero Alpine medals, to find a worse showing than 2022.

“We have clear goals and expectations that we build into our program,” head U.S. women’s Alpine coach Paul Kristofic said, “and, of course, when you don’t do that, it’s disappointing.”

There is one last chance for a medal Saturday in the team parallel race, an event added to the Olympics in 2018. Shiffrin is part of the U.S. roster for that, along with Paula Moltzan, AJ Hurt, River Radamus, Tommy Ford and Luke Winters.

So what went wrong for the U.S. this time? A lot, it turns out.

Start with Shiffrin, already one of the most accomplished skiers in history at age 26, with three medals from past Olympics — two golds, one silver — along with six world championship golds, three overall World Cup titles, 73 World Cup race wins (third-most ever) and 47 World Cup slalom victories (a record for any discipline).

“I don’t really understand it, and I’m not sure when I’m going to have much of an explanation,” Shiffrin said Thursday, when she tumbled about 10 seconds into the slalom portion of the combined after being fifth in the downhill. “And I can’t explain to you how frustrated I am to not know what I can learn from the day.”

Put simply: The world’s best skier in recent years produced poor performances over the past 1 1/2 weeks.

Other issues for the United States included the absence of Breezy Johnson, the second-best women’s World Cup downhiller this season, who missed the Olympics after surgery; Ford raced for the first time since getting seriously injured in January 2021; a smaller men’s team of just six racers because of rules changes, so only one American entered the slalom and, for the first time, zero entered the combined.

The best showing by an American woman was Moltzan’s eighth place in slalom.

Aside from Cochran-Siegle’s silver, the only American man to fare better than 12th was Radamus’ fourth place in giant slalom.

Maybe medals, especially golds, aren't the only measures of Winter Games success. They are, though, what matters most when judging a team.

“It’s the real superstars that have had the medal hauls in recent Olympics,” head U.S. men’s Alpine coach Forest Carey said, “and on the men’s side, anyway, we don’t have those superstars.”

At the Pyeongchang Games four years ago, the American men didn't earn an Alpine medal, but the women got three.

“It is a bit strange, because usually the Americans are always strong at big events,” Italian skier Alex Vinatzer said. “But at the end of the day, a one-off event is a one-off event, and it’s hard to do well.”

“This Olympics came at a bit of a transition time,” Carey said, pointing to Radamus, who turned 24 last weekend, as an example of up-and-coming talent. “The Olympics are all about medals, but the guys we have competed pretty well. And we have a stronger foundation coming up. It’s just hard to say if any of them are going to be transcendent like Bode or Ted.”

Howard Fendrich has covered Alpine skiing for The Associated Press at the last five Winter Olympics. Follow him at https://twitter.com/HowardFendrich or write to him at hfendrich@ap.org