Chen, Kim soar to Olympic gold medals on best day for US 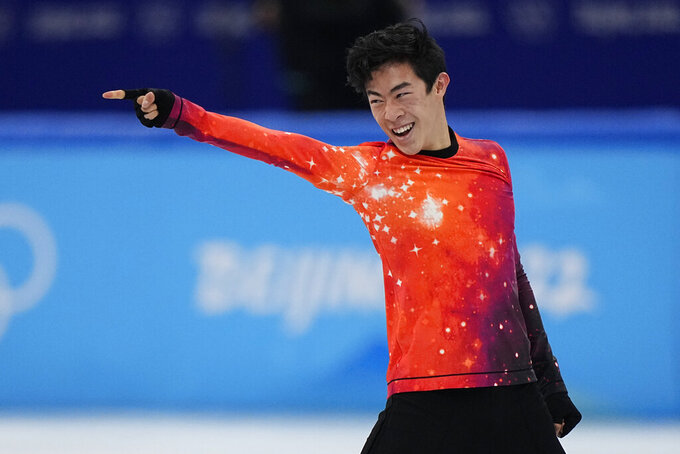 Nathan Chen, of the United States, competes in the men's free skate program during the figure skating event at the 2022 Winter Olympics, Thursday, Feb. 10, 2022, in Beijing. (AP Photo/David J. Phillip)

When his skates touched down for the final time in a historic arena in Beijing, he was an Olympic gold medalist.

Up at Genting Snow Park, Chloe Kim nailed all five jumps on her first run through the Secret Garden Olympic halfpipe, enough for her to easily defend her Olympic title on Thursday.

It was the United States’ best day yet at the Beijing Games. The United States also won gold in the Olympics’ first mixed team aerials event, giving it a total of four gold medals and 10 overall.

Chen, whose parents immigrated from China, had a memorable free skate to finally put behind him the immense disappointment from four years ago, when a nightmarish short program in South Korea dashed his medal hopes.

Skating his “Rocketman” program set to the film score by Elton John, the 22-year-old Chen landed all five of his quads to leave no question he was the best in the world. He finished with 332.60 points, three off his own world record and 22 ahead of silver medalist Yuma Kagiyama of Japan. Shoma Uno of Japan took bronze.

“It means the world. I’m just so happy,” said Chen, who was relaxed and expressive throughout his routine.

Chen, who is from Salt Lake City, took off with an opening quad salchow. He effortlessly landed four more quads. He had a slight bobble on a late combination sequence.

When his scores were read, coach Rafael Arutyunyan raised Chen’s left arm like a championship boxer.

In the Capital Indoor Stadium, where the United States and China played the first matches of the pingpong diplomacy in 1971, Chen made some history of his own by capping one of the most dominant four-year runs in skating history. Since his disappointment in Pyeongchang, Chen has won three straight world championships — the 2020 competition was canceled because of the pandemic — and extended his run of national championships to six.

Chen is the first American figure skating champion since Evan Lysacek in 2010.

Chloe Kim was so good on her first run down the halfpipe that it didn’t matter that she failed to land a big trick on her last run, aka the victory lap. The 21-year-old, who started snowboarding as a kid in Southern California, became the first woman to win consecutive Olympic titles on the halfpipe.

The last rider into the halfpipe on the first run, Kim landed all five jumps, including a front and backside 1080 — three spins each — and a 900. She seemed to amaze even herself, twice putting her hands to her head at the end of the run, which earned a score of 94.

Kim had struggled in practice before the competition began.

“I was just so proud of myself. I had the worst practice ever,” she said. “I probably landed my run twice when I’m used to landing it eight times. That kind of puts you in a weird headspace.”

Queralt Castellet of Spain took the silver medal in her fifth Olympics. Sena Tomita of Japan held off Cai Xuetong of China for bronze.

Shaun White will try for his second straight halfpipe gold medal and fourth overall on Friday in his fifth and final Olympics. Kim joined White as the only snowboarders to win back-to-back halfpipe golds. White did it in 2006 and 2010. After finishing fourth in Sochi, the 35-year-old from Carlsbad, California, returned to the top of the podium in 2018.

The U.S. ski team said two-time Olympic gold medalist Mikaela Shiffrin will compete in the super-G on Friday. Shiffrin failed to finish both the giant slalom and slalom, missing a gate within seconds of starting each race.

She had two training runs on the super-G course Thursday. The 26-year-old from Colorado never has entered a super-G at an Olympics but did win it at the 2019 world championships.

“I will try to reset again, and maybe try to reset better this time,” Shiffrin said after the slalom. “But I also don’t know how to do better because,” she continued, before pausing, “because I just don’t.”

Shiffrin is trying to become the first Alpine ski racer from the United States to win three Olympic golds across a career.

The American trio of Ashley Caldwell, Christopher Lillis and Justin Schoenefeld each earned their first Winter Games medals in mixed team aerials, the first time the United States medaled in the freestyle skiing discipline in a dozen years. Lillis’ back double full-full-double full was given the highest score of any trick in the finals, and the U.S. title was assured when Schoenefeld followed with a clean back double full-full-full.

Austrian skier Johannes Strolz won the Olympic gold medal in the Alpine combined race 34 years after his father, Hubert, did the same.

The 29-year-old Strolz was fourth fastest after the downhill run, but he was half a second quicker than anyone else in the slalom. He edged first-run leader Aleksander Aamodt Kilde of Norway by 0.58 seconds. Jack Crawford of Canada took bronze.

Hubert Strolz won gold in combined at the 1988 Calgary Olympics and the silver in the giant slalom.

“It’s really a great moment for me and I’m so thankful that I finally can live my dream and have this gold medal in my hands like my father did in 1988 in Calgary and, yeah, just a dream come true,” Strolz said. “The gold medal really means the world to me.”

Russian figure skating superstar Kamila Valieva practiced as usual, hours after reports surfaced that she had tested positive for a banned substance.

The 15-year-old Valieva, who was expected to deliver her nation its third straight Olympic gold medal in women’s figure skating, tested positive for a banned heart medication before the Beijing Games, the Russian newspaper RBC reported.

Valieva scored maximum points in the women’s individual sections of the team event, which the Russians skaters won.

The International Skating Union declined to address the reports, saying it “cannot disclose any information about any possible anti-doping rule violation.”