Column: Welcome to the Island of Misfit Sports 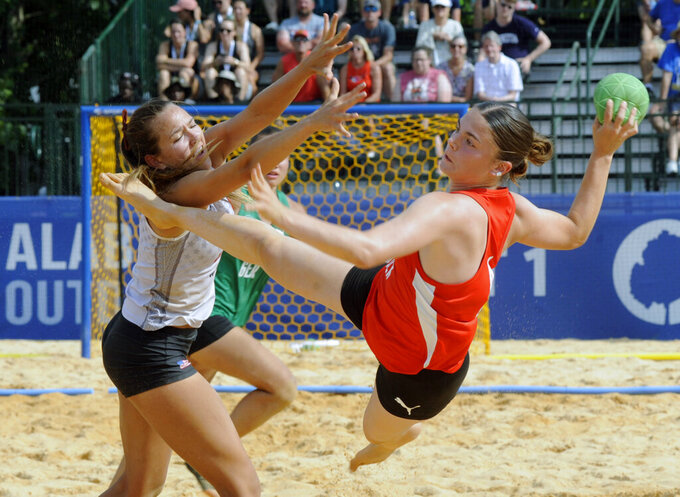 German beach handball player Michelle Schaffer shoots against American defender Isabelle Gosar at The World Games in Birmingham, Ala., on Wednesday, July 13, 2022. The 11-day, Olympic-style competition is being held in the United States for only the second time, at venues throughout Birmingham, Ala. (AP Photo/Jay Reeves)

BIRMINGHAM, Ala. (AP) — Like a fish out of water, Elisabeth Hammerstad tracks down a simple garden hose to wash off the sand and drench herself in a bit of relief from the blistering Alabama heat.

The fair-skinned Hammerstad, her hair tied back in a French braid, has just helped Norway to an easy victory over Australia.

In beach handball, of all sports.

Hammerstad sees nothing unusual about her Arctic homeland standing out in an obscure sport that would seem best suited to warm-weather nations.

“We have summer in Norway too,” she said with a wry smile.

One other thing: What is beach handball?

Those sort of queries come up frequently at The World Games, a sort of Island of Misfit Toys for a fascinating array of sports that are on the outside looking in at the Olympics, enviously hoping for their chance to someday shine on the biggest stage.

From air sports (parachuting and drone racing) to wushu (a Chinese martial art) — and pretty much everything in between — this 11-day, Olympic-style competition is being hosted by a U.S. city for only the second time in its four-decade-long existence.

Birmingham seems a curious choice for a competition that was delayed a year by the COVID-19 pandemic, since its sporting history largely begins and ends with college football and a wide array of failed pro teams.

But for a city trying to demonstrate how far it's come from an ugly role in the American civil rights movement, this is perhaps the perfect event to show its tolerance for a wide collection of sports that most locals have never seen — or even understand.

Take beach handball, which features players flinging themselves into all sorts of twirling, twisting contortions to shoot for goals that are worth two points.

It was being held on two land-locked courts filled with sand in the shadow of Sloss Furnaces, a remnant of the long-forgotten era when this was the Steel City of the South.

Then there's korfball, which can best be described as basketball without all the dribbling and dunking, played on an indoor court with a pair of hoops that have neither a backboard nor a net.

If you think Stephen Curry has it tough from beyond the 3-point stripe, you ought to see how challenging it is to knock one down in korfball.

“It is tough," Belgium player Julie Caluwe said. “It's 3 1/2 meters (about 11 1/2 feet) high. You have to move from your opponents because otherwise you can't shoot. And there is no backboard for a goal. So you have to shoot it right.”

Korfball really stands out when you notice the makeup of the teams — four men and four women on each squad, all on the court at the same time. The sport's long-shot hopes of getting in the Olympics are largely based on its inclusive nature.

“We are the only (team) sport with boys and girls, so it would be very nice if it's in the Olympics,” Caluwe said. “The idea behind the Olympics is also what korfball is about."

Thomas Bach, president of the International Olympic Committee, stopped by the Birmingham-Jefferson Convention Center to watch a korfball game between Belgium and his native Germany.

“It shows the diversity of sports,” Bach said, standing just off the court. “You can experience sports which are not always on everybody’s mind. But you see the same passion of the athletes, just like other sports on the Olympic program. "

In a bid to reach a younger, hipper audience, the Olympics have picked off several World Games events over the years, including badminton, rugby sevens, taekwondo, trampoline and triathlon.

Then there are sports that haven't gained permanent Olympics status, such as karate, softball, sport climbing and breakdancing. They are all on the program in Birmingham.

Climbing and breakdancing will also be Olympic sports in Paris, while other sports are making a big push to be on the program at Los Angeles in 2028.

Flag football's debut at the The World Games is also the kickoff to a high-profile campaign — backed by the NFL — to be added to the Olympics in La La Land.

“Today, the dream feels closer than ever for us," said Pierre Trochet, president of the International Federation of American Football. “Flag football is one of the world's fastest-growing sports for a reason. It's fast, it's creative, it's skillful. ... It's also a sport that's truly accessible and truly inclusive. Flag can be played by everyone, everywhere.”

Some sports drew sparse crowds in Birmingham, but others proved highly popular.

There were reports of tickets being scalped for hundreds of dollars for sumo. More than 8,000 turned out to watch the Americans beat Japan 3-2 for the gold medal in softball, an on-again, off-again Olympic sport. Even some athletes became enamored with other sports.

Crazy? Let's check in on tug of war, which old-timers may best remember from “Battle of the Network Stars.”

But this isn't Team Telly Savales vs. Team Hal Linden; nope, it's a legitimate sport matching hulking athletes on each end of a thick rope, yanking and pulling until one side is hauled over the line.

The Swiss men, their every move coordinated with the precision of — yep, we'll say it — a high-end watch, romped to a gold medal in the 640-kilogram class on the grass infield of the athletics track at UAB.

The Olympics should give serious consideration to reinstating tug of war to its program.

Yep, we said “reinstated.” Tug of war was actually an athletics event at five Summer Games from 1900 to 1920.

While many World Games events are accompanied by raucous music and boisterous announcers, there is at least one sport for those who prefer the serenity of a library.

The only noticeable noise inside the ballroom at the Sheraton Hotel comes from the clacking of the balls. Everyone spoke in hushed tones. The players barely spoke at all. A white-gloved, tuxedoed official racked up the balls before each games.

With the air-conditioned room creating a pleasant contrast to the sweltering heat just outside the doors, it took a bit of effort to avoid dozing off for a quick nap.

Billiards is the perfect sport for South Africa's Aden Joseph, who took note of his portly frame stuffed into formal, all-black attire — dress pants and shirt, accompanied by a silky vest and bow tie.

“I love this sport first of all, because it's indoors," Joseph said, chuckling. “I'm not really built for anything outside.”

He does look longingly at the uniforms of other sports, which are clearly a lot more comfortable than what is worn in billiards.

“Unfortunately, it's part of the sport,” Joseph quipped, quickly adding what he would prefer to be wearing, "a normal T-shirt. A pair of khakis. That would be nice.”

As with many other international events, Russia and Belarus were banned from The World Games for the invasion of Ukraine.

But Ukraine sent a delegation of more than 100 athletes, including a team in the group competition of aerobic gymnastics.

This is another element to The World Games program: disciplines within an Olympic-approved sport — gymnastics, in this case — that have not gained a promotion to the big time.

In between posing for selfies with her Ukrainian teammates, Anastasiia Isaienko made her pitch for aerobics at the Olympics.

“It is a kind of sport that includes dance, acrobatics, an element of gymnastics, some elements with music. It's great," she said, sounding downright persuasive.

For now, The World Games will have to do.