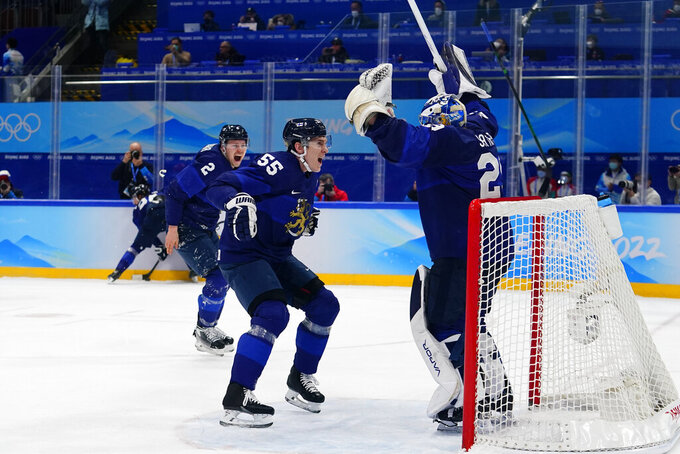 BEIJING (AP) — Sheets of paper rained down like super-sized confetti on the bench, which players leapt off at full speed to pile on top of goaltender Harri Sateri with such force that they knocked the net off its moorings.

After finally accomplishing what so many Finland teams before were unable to do, there was plenty of strength to go around. Finland, known as Suomi in Finnish, is now synonymous with gold.

The Finns knocked off the favored Russians 2-1 Sunday to win the men's hockey tournament without NHL players at the Beijing Games, capturing an Olympic gold medal for the first time in the nation’s history.

“We got what we came here for,” Finland defenseman Sami Vatanen said. “We battled hard, and we got the first Olympic gold medal in Finnish ice hockey history. It’s something something special, and nobody can ever take it away from us.”

Finland had never won at the Olympics on the men’s or women’s side. It last reached the final in 2006 and lost to Sweden, matching the silver from 1988.

The defending champion Russians had to settle for silver instead of going back to back.

“Life doesn’t end with this,” coach Alexei Zhamnov told Russian TV. “There’s still a lot of competitions ahead of us.”

After winning gold in 2018 as the Olympic Athletes from Russia, the Russians competed this time as ROC, short for Russian Olympic Committee. The ROC and OAR names were the result of sanctions for doping and cover-ups across multiple Olympic sports.

The tournament unfolded in the shadow of another Russian doping saga, this time involving 15-year-old figure skater Kamila Valieva. Word emerged after the Russian team won gold that Valieva tested positive for a banned substance in December. She was allowed to skate in the individual event, finishing a disappointing fourth.

Players and coaches from the Russian hockey team and others at the rink faced questions about the scandal and the IOC's ruling not to hold a medal ceremony if she finished on the podium.

For the Russian hockey players, no matter the name, the silver in the men's tournament was the 32nd medal the country's athletes earned in Beijing. Just not the gold they expected.

“On this day, we’re the best country in the world in hockey,” Finland forward Harri Pesonen said.

While the Russians looked like the new favorites when the NHL withdrew because of pandemic-related schedule disruptions in late December, the Finns were actually the big winners. With recent NHL players such as captain Valtteri Filppula, forward Leo Komarov and defensemen Sami Vatanen and Mikko Lehtonen on the team, Finland had the firepower to go along with its hallmark of strong structure, defense and goaltending.

That combination helped Finland go through the Olympics undefeated in six games, including a three-goal comeback to beat rival Sweden in the preliminary round. Finland beat Switzerland, Slovakia and the Russians to roll through the tournament in efficient, business-like fashion with longtime coach Jukka Jalonen behind the bench.

This game ended better for the Finns than the last final 16 years ago, when national stars Teemu Selanne, Kimmo Timonen, Mikko and Saku Koivu and Jere Lehtinen almost got the job done.

The Russians got only three shots on net in the third period.

“That’s how good our guys played,” Sateri said. "They played such good defense today and throughout the whole tournament.”

It was only fitting that Anttila played a major role in the final game of a tournament played in a quarantined bubble. The 36-year-old veteran forward spent his first six days in Beijing in isolation after testing positive for the coronavirus upon arriving in China, which has a strict COVID-19 policy inside and outside the Olympics.

This Olympic team was constructed by Lehtinen, who is now general manager after a long NHL career when he was known as one of the best defensive wingers in hockey. Lehtinen always thought it was possible for Finland to win gold and made that feeling known.

“I tell a lot of people, ‘That year is coming,’” Lehtinen said. “You never know when it’s going to happen.”

That year is finally here, even though NHL stars like Aleksander Barkov, Mikko Rantanen and Miro Heiskanen were not at the Olympics.

There were plenty of similarities to the NHL even without the league’s players filling just about every roster. The tournament was played on the narrower NHL-sized rinks in an effort to speed up games and in a confined Olympic bubble similar to what the league constructed for the 2020 playoffs to award the Stanley Cup.

Games also took place in quiet arenas — not empty like the NHL playoffs but with selected Chinese fans allowed in. A total of 1,288 spectators watched Finland beat Russia in the final, which ended in a raucous celebration in the afternoon in Beijing and 8:20 a.m. back home.

Alcohol sales are prohibited in Finland until 9 a.m. on Sunday, but that didn't stop fans from gathering at bars to watch. That was just the start of the party.

"It is hard to put in words what this means," Filppula said. "Hockey is a big thing in Finland. We have come close a couple of times, and it's finally nice to get the first one. We played a great tournament, and this is the reward.”