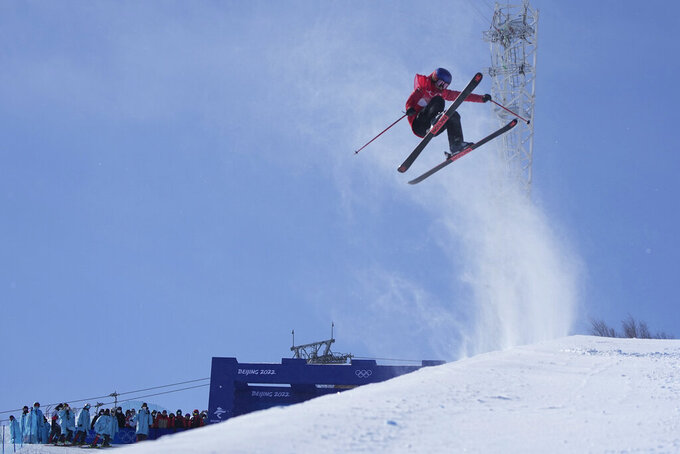 BEIJING (AP) — Eileen Gu turned the Beijing Olympics into her own personal playground.

In the city. In the mountains. Spinning, flipping and flying above three different venues.

The American-born Gu came into the Games hoping to win three gold medals in freestyle skiing while representing China, where her mother was born. She didn’t, but she did come away with two golds and one silver, making her the first action-sports athlete to win three medals at the same Olympics.

The 18-year-old Gu capped her global coming-out party Friday by winning the gold medal in women’s halfpipe. She had such a big lead after two runs that she was able to take a carefree final run down the halfpipe.

“I was very emotional at the top and I chose to do a victory lap,” Gu said. “Because I felt like, for the first time, I like really deserved it and I really earned it.”

She won the gold medal in the Olympic debut of women’s freeski big air in front of an old steel mill in the city. She took the silver in slopestyle on the Secret Garden course, where elements were carved out of snow to resemble portions of the Great Wall. Finally, she dominated in the halfpipe.

Well known in China before these Games, she’s now a household name back in the United States and around the world. Part of that had to do with the criticism she received for competing for China rather than the United States.

But a lot of it was due to her skill, confidence and personality.

If there’s a face of joy at the Beijing Games, it’s Gu and her ever-present smile. It was a remarkable contrast to the tears of Russian figure skater Kamila Valieva after her shocking litany of mistakes left the heavily favored teenager off the podium in women’s figure skating, and the disappointment and self-doubt of U.S. skiing superstar Mikaela Shiffrin after she failed to medal in any of the five individual races she entered.

Gu is also a model and her face is on advertisements all over Beijing. She’s been photographed for Vogue, Victoria’s Secret, Louis Vuitton, Tiffany and more. Born in San Francisco, she will enroll at Stanford in the fall.

On Friday, she remained undefeated in the halfpipe with exceptional performances on her first two runs. She scored 93.25 on her first run and 95.25 on her second run.

“She has basically set a level that’s pretty unattainable for a lot of us,” said American Carly Margulies, who finished 11th.

She also has three stuffed Bing Dwen Dwen mascots that are given to all medalists. The mascots are so popular that people stand in line for hours in the city trying to buy one. Gu got into the spirit of the Beijing Games by wearing a furry panda hat on the podium.

Ryan Regez led a 1-2 finish by Switzerland in the Olympic skicross final at Genting Snow Park, taking the lead early and never giving it up. He raised his arms in triumph after finishing the course filled with jumps, bumps and rolling terrain. Teammate Alex Fiva finished with the silver medal and Russian athlete Sergey Ridzik grabbed the bronze.

Thomas Krol won gold in the 1,000 meters, giving the Netherlands its third straight Olympic speedskating title in the event. The Netherlands earned its fifth gold medal in 12 events in Beijing with one day of competition remaining. Laurent Dubreuil of Canada took silver and Haavard Lorentzen, the 2018 silver medalist, earned bronze.

Johannes Thingnes Boe of Norway dominated throughout and stayed composed during the four shooting stages to win the gold medal in the men’s mass start race.

Brad Gushue is returning to Canada with a bronze medal in men’s curling and John Shuster is going home to the United States empty-handed. Gushue won the gold medal 16 years ago in Turin and Shuster won it four years ago, helping to popularize curling in the United States.

Sweden and Britain will play for gold Saturday.

The Russians and Finland will meet in the gold medal game Sunday. The defending champion Russians beat Sweden 2-1 in a shootout, and Finland defeated surprise semifinalist Slovakia 2-0.

Ivan Fedotov made 34 saves in regulation and overtime against Sweden and six more in the eight-round shootout, and Anton Slepyshev scored in regulation. Former NHL forwards Nikita Gusev and Yegor Yakovlev and New Jersey Devils prospect Arseni Grisyuk scored in the shootout.

Tournament MVP candidate Sakari Manninen scored his fourth goal of the Olympics for Finland, and former Florida Panthers goaltender Harri Sateri made 28 saves for the shutout of Slovakia. The Finns are looking for their first Olympic gold medal.

Slovakia will play Sweden for the bronze. It is going for its first hockey medal of any kind since the breakup of Czechoslovakia.