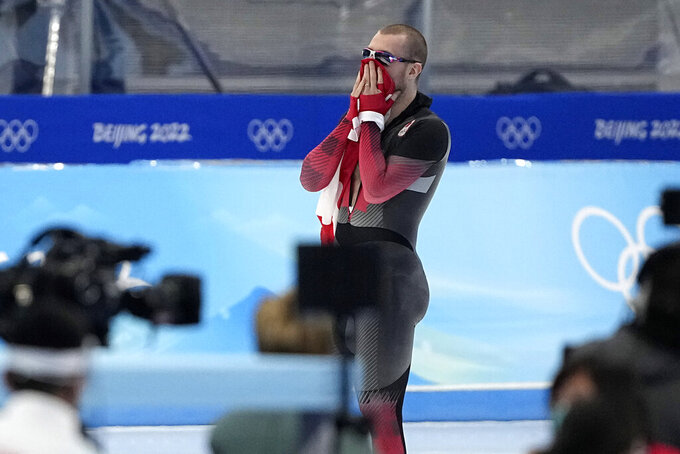 Laurent Dubreuil of Canada reacts after winning the silver medal in the final heat during the men's speedskating 1,000-meter finals at the 2022 Winter Olympics, Friday, Feb. 18, 2022, in Beijing. (AP Photo/Ashley Landis)

BEIJING (AP) — Thomas Krol's third attempt to make it to his first Olympics ended with a gold medal.

The Dutch speedskater won the 1,000 meters on Friday, giving the Netherlands its third straight Olympic title in the event.

Krol failed to qualify in his first attempt at making the Dutch Olympic team in 2014. Four years ago, the national federation named Kai Verbij to the team after he was injured and unable to compete at trials, where Krol earned the spot in the 1,000. Making it worse for Krol is that he and Verbij are best friends.

They came out on different ends in Beijing. Krol made it to the top of the podium. Verbij quit late in his race to avoid potentially colliding with a faster Laurent Dubreuil of Canada, who earned silver. Full of despair, Verbij held his head in his hands afterward.

“The gold medal is a huge dream that came true with a lot of emotions,” Krol said.

He called his girlfriend on his cellphone from the infield at the Ice Ribbon oval minutes after securing victory.

He extended the Dutch dominance in the 1,000. In 2014, Stefan Groothuis won and Kjeld Nuis followed with a victory in 2018. Krol led the World Cup standings this season.

It was Krol’s second medal in Beijing. The 29-year-old skater earned silver in the 1,500 behind Nuis.

“I was going for revenge the last four years,” Krol said. “I grew as a person, I made a lot of steps mentally, physically I became a different skater. I stepped up a level and now I can be here at the Olympics and win a gold medal, and a silver, of course.”

Krol faced a tense wait as he watched the final two pairings try to beat his time. Dubreuil, better known for his speed in the 500, was seven-tenths of a second ahead of Krol early on.

“When he didn't make my time, I was just overwhelmed with emotions,” Krol said.

The Netherlands claimed its fifth gold medal in 12 events in Beijing with one day of competition remaining.

Skating in the last pair with Dubreuil, current world champion Verbij pulled up coming off the next-to-last turn. He yielded to Dubreuil, who had the right of way as the skaters changed lanes. The Canadian had just completed his fastest 600 meters.

“I didn't feel I had enough speed to go before him in the lane change, so I had to quit,” Verbij said. “Otherwise, I would’ve been disqualified and probably messed up his race.”

“I can't say thank you enough to him,” he said. “It was a really professional and classy move to do.”

Jordan Stolz, a 17-year-old making his Olympic debut, was the highest finishing American in 14th.