Mills wants activism to be remembered more than gold medal 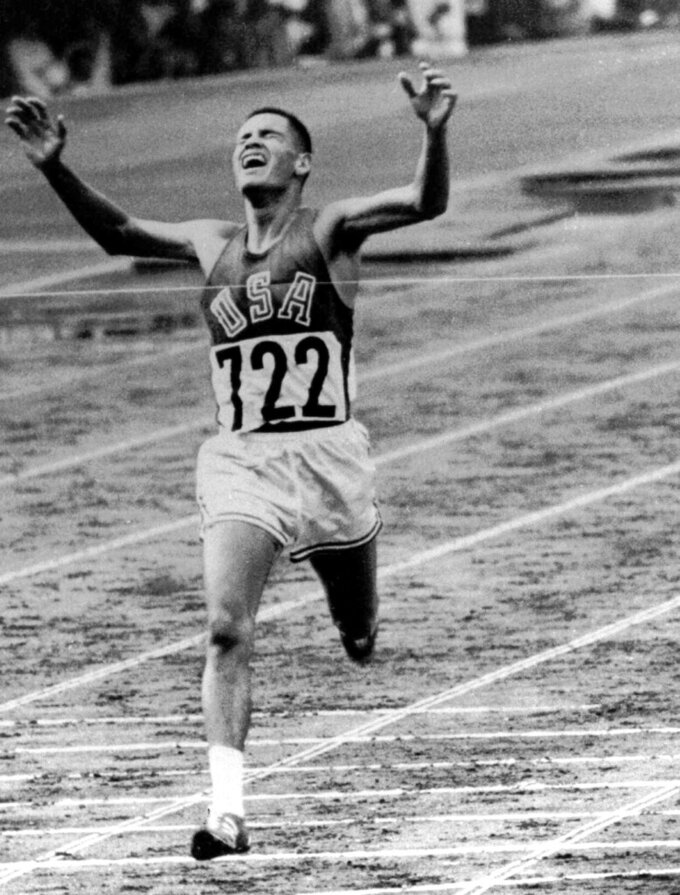 TOKYO (AP) — A few years before Billy Mills won his gold medal at the 1964 Tokyo Olympics, the Native American was several floors up in front of an open hotel window,standing on a chair and ready to jump.

He was despondent over yet another racial slight, this time being excluded from a photograph because of his brown skin. It happened several times, often after he'd won a big race.

Unknown to him at the time, his bouts of depression were also triggered by un-diagnosed hypoglycemia and type-two diabetes.

He then heard what he interpreted as his late-father's voice, perhaps speaking from the South Dakota Pine Ridge Indian Reservation where Mills grew up.

His father died when he was 12, leaving him an orphan after his mother's death years earlier. He was most frustrated when he was a student at the University of Kansas, where he said "it was very hard in the beginning” with Native Americans limited to only a few streets around Lawrence.

“Any time we ventured too far, anybody felt they had the right to stop us and ask what we were doing,” Mills explained in an interview with The Associated Press.

In the hotel room, Mills thought back to his father's words spoken long ago: “You have broken wings, and it takes a dream to heal a broken soul."

“So I had to find a dream,"Mills recalled. "You have to find a passion in life and develop the skills to equal the passion."

Now 82 and awaiting surgery later this year on a nagging right hip, Mills said he backed away from the window and put down his dream on paper. The words changed his life just moments after he almost took it.

He laughed telling the story, acknowledging his youthful overconfidence.

“As I got control of my emotions I put down only the gold medal 10,000-meter run," Mills said. "I went to Tokyo with a totally different perspective than most of my colleagues. I was on a quest to heal a broken soul. It was the journey, not the destination, that would empower me as long as I finished the race.”

He did better than that.

Mills won the 10,000 in Tokyo in one of the biggest upsets of the Olympics, surging past Australian Ron Clarke, the world record holder at the time, and Mohammed Gammoudi of Tunisia.

The final seconds of the race were immortalized by Dick Bank, who was working as a spotter with NBC’s Bud Palmer. Bank was dismissed a few days after for shouting out over the staid Palmer as Mills sprinted the final 80 yards on the cinder track, the last time that surface was used at the Olympics.

Palmer quickly got the microphone back.

Mills remains the only American to win Olympic gold at 10,000 meters. But the medal is barely an asterisk in a life working for Native Americans.

“The gold medal fits in there because I healed a broken soul, but far behind it was winning the gold medal as an athlete,” Mills said. “That is so far behind.”

He'd rather talk about co-founding “Running Strong for American Indian Youth,"and being honored in 2014 by the Anti-Defamation League for his work “against hate and bigotry.” Add to that, President Barack Obama awarding him the Presidential Citizens Medal.

After receiving the award, Mills said he told his wife Pat “that this is proof we're succeeding in our journey.” His grand-daughter, Sydney, is now the deputy director of Running Strong, which — among other things — helps connect remote homes on reservations to running water.

“This is so a young girl can turn on the faucet and take a nice hot bath before she goes to bed, have a quick shower before she goes to school, wash the dishes with running water without having it hauled,"Mills said. "There are still places on the reservation where they are getting water from the creek and they have to boil it. We are solving some of these issues that the poverty pockets of America face."

Mills said he felt instantly at home in Tokyo in 1964, despite being a lieutenant in the U.S. Marine Corps and visiting a country that 19 years earlier had been the enemy.

“In my own mind I was going from the Black Hills of South Dakota," Mills said. "That to us spiritually — it’s the heart of everything that is. I fly into Tokyo and I remember seeing Mt. Fuji and I was so taken. My immediate thoughts were that the mountain and the sacredness of it must be the heart of everything that is to the Japanese people. I still say today, the Japanese were the greatest Olympic hosts.”

A member of the Oglala Lakota (Sioux) tribe, Mills said the Olympic medal ceremony 56 years ago cut deep, a reminder the flag represents a broken promise for many Native Americans.

“I have to be very cautious saying this here in America because of the times today," Mills said. "I stood on the victory stand. They're playing our national anthem. It was beautiful. It was powerful. And I was honored to be a citizen of the United States of America. But with that was a sadness that America does not understand me, and that I do not belong."