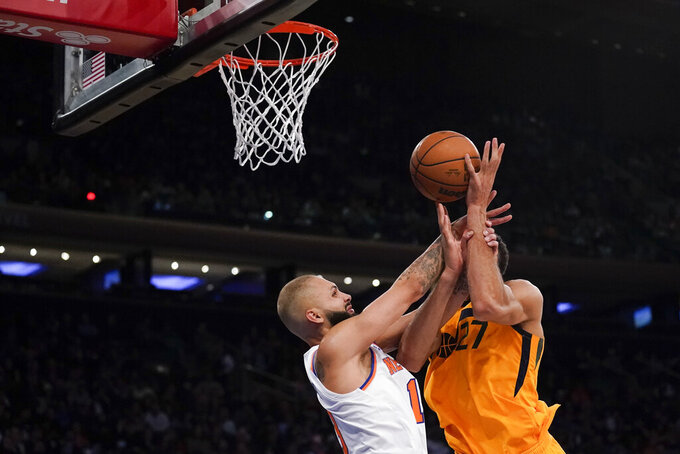 New York Knicks' Evan Fournier, left, fouls Utah Jazz's Rudy Gobert who was on his way to the basket during the second half of an NBA basketball game, Sunday, March 20, 2022, in New York. (AP Photo/Seth Wenig)

PARIS (AP) — After criticism from French national team players about a basketball venue planned for the 2024 Paris Olympics, organizers and the sport’s governing body agreed Thursday to find a new one.

NBA players Evan Fournier and Rudy Gobert, who helped France win a silver medal at last year's Tokyo Olympics, were unhappy about the choice of Hall 6 at the Parc des Expositions for preliminary round games in men's and women's basketball.

Fournier said the ceiling was too low and Gobert joked he was “not going to play in a room where I hit my head when I shoot.”

Gobert, a center with the Utah Jazz, also said this week that the venue, which was itself a change in 2020, showed “a little lack of respect.”

The venue has now been rejected “following the most recent sporting and technical assessments” by Paris organizers and basketball body FIBA.

The organizing committee said in a statement that it and FIBA “have agreed that this venue will no longer host basketball competitions due to its specificities.”

The search for a replacement hall will likely take several months and “will meet Olympic requirements whilst respecting Paris 2024’s guiding principles on environmental and budgetary responsibility,” organizers said.

Olympic medal games in basketball will be played at the 15,000-capacity Bercy Arena, which hosted an NBA game two years ago between the Milwaukee Bucks and the Charlotte Hornets.