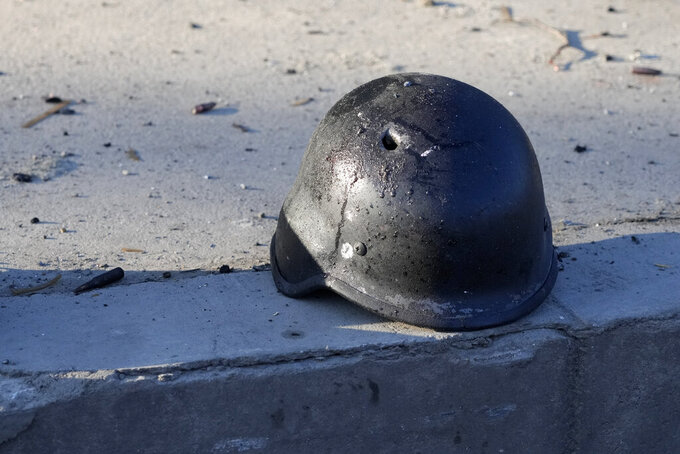 WARSAW, Poland (AP) — Poland’s refusal to play its World Cup qualifier against Russia next month in response to that nation's invasion of Ukraine gained wider support when Sweden followed with its own plans to protest to FIFA on Saturday.

Polish soccer federation president Cezary Kulesza announced Poland's decision and said it was in talks with other federations to present a unified position to FIFA, which is responsible for the March 24 game in Moscow.

"No more words, time to act!” Kulesza wrote on Twitter, adding the move was prompted by the “escalation of the aggression.”

Also Saturday, Chelsea owner Roman Abramovich suddenly handed over the “stewardship and care” of the Premier League club to its charitable foundation trustees. The move came after a member of the British parliament called for the Russian billionaire to hand over the club in the wake of Russia’s invasion of Ukraine.

Abramovich, who has owned Chelsea since 2003, made no mention of the war in his statement.

He said: “I have always taken decisions with the Club’s best interest at heart. I remain committed to these values. That is why I am today giving trustees of Chelsea’s charitable Foundation the stewardship and care of Chelsea.”

Poland captain Robert Lewandowski and goalkeeper Wojciech Szczesny were among those supporting its federation's decision, with the Bayern Munich striker saying “we can’t pretend that nothing is happening.”

Sweden, a potential opponent of Russia in next month’s playoffs, later joined Poland in declaring its national team would not play a match against the Russians regardless of where it takes place.

The Czech Republic, another team to potentially face Russia, is likely to follow suit.

Under the circumstances, “it’s almost impossible to imagine that such a game would take place,” said Petr Fousek, the head of the Czech football association. “It’s very likely we will follow the Polish and Swedish scenario.”

Sweden made its position clear.

“The illegal and deeply unjust invasion of Ukraine currently makes all football fixtures with Russia impossible,” said Karl-Erik Nilsson, the Swedish federation’s chairman. “We therefore urge FIFA to decide that the playoff matches in March in which Russia participates will be canceled."

The winner of the Poland-Russia match is due to host Sweden or the Czech Republic on March 29 for a place at the World Cup being played in Qatar from Nov. 21-Dec. 18.

“We have a hard time believing,” Nilsson added, “that FIFA will not follow our call. Russia can not join as long as this madness continues.”

Nilsson is also first vice president at UEFA which has stripped Russia of hosting the Champions League final in St. Petersburg in May. UEFA decided Friday to move that game to Paris.

“I can’t imagine playing a match with the Russian National Team in a situation when armed aggression in Ukraine continues,” Lewandowski said on Twitter. “Russian footballers and fans are not responsible for this, but we can’t pretend that nothing is happening.”

FIFA has yet to take a clear position on Russia hosting or even playing against Poland.

European soccer body UEFA said Friday that in its competitions all Russian and Ukrainian teams must now move their home games to play in other countries.

A potential precedent for action is from 1992. Both FIFA and UEFA removed Yugoslavia from their competitions following sanctions imposed by the United Nations at the outbreak of war there.

Previously, Poland had only said it did not want to play the qualifying playoff semifinal in Moscow.

In other sports, Norway's ski federation said Saturday that Russian skiers are not welcome to compete in the Nordic country because of Russia's “violations of international law and attacks on the Ukrainian people.”

On Friday, FIS pulled its remaining World Cup events this season from Russia but later allowed Russians to carry on competing.

FIG President Morinari Watanabe said: “Our thoughts go to the members of the Gymnastics community in Ukraine. Sport is friendship and solidarity. We must show solidarity with the members of our family who are in despair and offer them a helping hand to ensure their future.”

In Madrid, the Russian flag and anthem were absent before the match between the Russia women rugby team and Spain. The hosts won 27-0 to become Rugby Europe champion. That came a day after Rugby Europe suspended all events in Russia.

Russia withdrew its team from the biathlon World Cup series on Saturday in protest at new restrictions. The International Biathlon Union had ordered the Russia and Belarus teams to compete as “neutral athletes” without their country’s flag and anthem so that emblems of the two countries would not be on display.

Kyiv residents braced Saturday for another night sheltering underground, as Russian troops closed in on Ukraine’s capital and skirmishes were reported on the outskirts. Ukraine’s leader claimed that Ukraine’s forces had repulsed the assault and vowed to keep fighting. “We will win,” President Volodymyr Zelenskyy said.