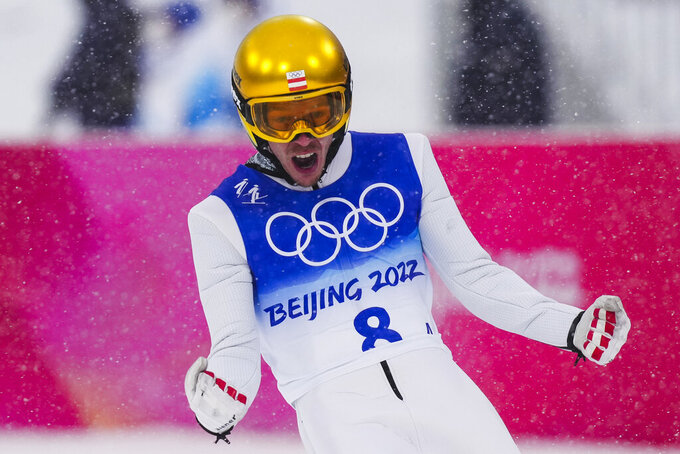 Franz-Josef Rehrl, of Austria, celebrates after his jump during the team Gundersen large hill/4x5km ski jumping competition round at the 2022 Winter Olympics, Thursday, Feb. 17, 2022, in Zhangjiakou, China. (AP Photo/Matthias Schrader) 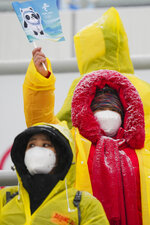 “It was actually possible to enjoy the last kilometers and just savor the moment," said Graabak, who was the final Norwegian skier.

It was an impressive result after Riiber, a three-time champion, chose to go home earlier in the day because he didn't feel fit to compete.

“Jarl texted me quite soon after the race (Tuesday) and he told me to get ready,” Bjoernstad said.

Riiber took the wrong turn early in a 10K cross-country race and lost a large lead he earned in ski jumping on Tuesday, a day after getting out of COVID isolation. That mistake helped Graabak win gold, making him the first two-time Nordic combined Olympic champion on the large hill after winning the event in 2014.

Graabak also helped Norway win the team event eight years ago and with another first-place finish, he's the first to win four Olympic gold meals in the sport that combines ski jumping and cross-country skiing.

Frenzel had only one day to train for the final Nordic combined event of the 2022 Olympics because he was in isolation after testing positive for COVID-19 upon arrival in China.

“It was a long time and it’s a good feeling to be back," he said.

The Germans' performance also gave Vinzenz Geiger more hardware to go with the gold he won on the normal hill at the Beijing Games.

Japan finished third, getting an Olympic medal in a Nordic combined competition for the first time since winning gold at the 1994 Lillehammer Games.

“We were working hard in the last four years," said Akito Watabe, who won bronze on the normal hill.

Austria could not keep the eight-second lead it earned in ski jumping, or the advantage it had on the cross-country course midway through the race and finished fourth. The traditional power failed to medal for the first time since 1994.

Austria's jumpers combined for 475.4 points earlier in the day thanks to jaw-dropping distances, including one that went 141 meters (463 feet), and graceful style through the air. That gave them the lead for the cross-country ski race with four skiers racing 5K each.

Manuel Faisst of Germany, who replaced Terence Weber after he tested positive for COVID-19 and didn’t recover quickly, rallied to put his team in the lead at the first exchange five kilometers into the 20K race. Lamparter gave Austria a slim lead at the midway mark and teammate Lukas Greiderer maintained it before the Norwegians took over.

Graabak closed with a strong performance over the final five kilometers to put Norway on the top spot on the podium, inspired to bring home gold for Riiber.

“Coming in as a backup for Jarl and not sure if I was able to be on the team, and standing here now being an Olympic champion, it’s emotional just talking about it,” Bjoernstad said.

“I’m excited to see what the guys are going to do in the future," the 31-year-old Fletcher said. “It’s crazy to think that this will be the last time I will be putting on an Olympic bib, unless I get some stupid idea to come back in four years.”

China’s young and inexperienced team included two skiers who competed on a major, international circuit for the first time this season.

“Our team is bringing more glory to our nation,” 17-year-old Haibin Fan, who competed with a trio of 21-year-old teammates, said through an interpreter.

The Chinese team had to wait more than six minutes to start the race and finished last, nearly 14 minutes behind Norway.