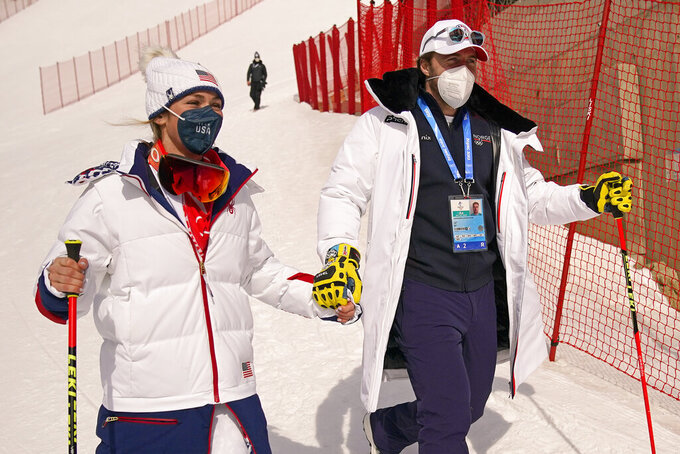 Norway's Aleksander Aamodt Kilde, right, and his girlfriend Mikaela Shiffrin, of United States stands leave the finish area after she competed in the women's super-G at the 2022 Winter Olympics, Friday, Feb. 11, 2022, in the Yanqing district of Beijing. (AP Photo/Robert F. Bukaty)

BEIJING (AP) — When Mikaela Shiffrin was getting set to head to the athletes’ lounge after her third event of the Beijing Olympics, she spotted her boyfriend, Norwegian racer Aleksander Aamodt Kilde, who was there to watch her compete. She grabbed him by the back of his white coat, and Alpine skiing’s power couple walked side by side — at one point, glove in glove — down the snow-covered path.

When Kilde was preparing to compete in a slalom run for the first time in two years as part of the Alpine combined at these Winter Games, Shiffrin offered him suggestions in a discipline that’s her specialty.

They are two elite athletes in the same sport who prop each other up and help each other out. They attend each other’s races. They offer each other tips. And it just so happens that Valentine’s Day falls on Monday, during the Olympics.

“Together we can just talk about anything and it doesn’t have to be a big deal, support each other on good days and bad days. And that’s what we’re here for,” Kilde said. “That’s why you have a partner, so you can share whatever you want to share with her.”

She’s won three World Cup overall titles; he’s won one. Shiffrin, a 26-year-old American, arrived in China as a two-time Olympic gold medalist and could have as many as three events remaining next week, starting with Tuesday’s downhill. Kilde, who is 29, collected a pair of medals last week, including a silver in the combined.

“A lot of people have told me, ‘It’s hard to find somebody who is OK with you being in more of the spotlight than they are.’ But at the same time, he’s under the same pressure, he has the same goals ... the same mentality. He's in the same spotlight, actually,” Shiffrin said in an interview last year. "He’s just so excited for me to do what I do and he’s so excited to do what he does himself.”

Shiffrin’s trip to China began with a pair of poor races, in which she missed gates within seconds of leaving the starting hut. After ending up with “Did Not Finish” on the result sheet for a second time, she said she still found “so much to be optimistic about,” including that Kilde finally had earned his first career Olympic medal.

Kilde, meanwhile, sought to lift her spirits and stand up for her publicly, posting a photo of a forlorn Shiffrin — sitting on the snow after her slalom error, knees bent and head bowed — and writing on Instagram, in part: “all I see is a top athlete doing what a top athlete does! It’s a part of the game and it happens. The pressure we all put on individuals in the sports are enormous, so let’s give the same amount of support back. ... I love you Kaela.”

They are hardly the only such pairing in skiing or other Olympic sports.

Another Alpine couple: American Travis Ganong and Canadian Marie-Michele Gagnon. He proposed on a mountain — where else? — in Zermatt, Switzerland, in September.

And another: Michelle Gisin of Switzerland, who won a bronze in the super-G on Friday and a gold in the Alpine combined at the 2018 Pyeongchang Games, lives with Italian skier Luca De Aliprandini.

Sharing an occupation “makes things much easier with everything,” Gisin said.

They understand each other’s time constraints and demands, whether it has to do with training or competition or even doping tests and media obligations. When De Aliprandini won a silver in the giant slalom at the 2021 world championships in Cortina d’Ampezzo, Italy, Gisin ran into an area reserved for reporters and started taking pictures of him with her phone.

And the examples go on and on.

U.S. aerials skiers Ashley Caldwell and Justin Schoenefeld gave each other an early Valentine’s Day gift — a gold medal. Caldwell, 28, and Schoenefeld, 23, have been dating for around three years, and they joined Chris Lillis to win the Olympic debut of the mixed team aerials event on Thursday. There’s also newly minted Olympic moguls silver medalist Jaelin Kauf and U.S. teammate Brad Wilson, who've been dating since 2020.

American snowboarders Red Gerard and Hailey Langland began dating before the 2018 Winter Games, where Gerard won gold in men’s slopestyle, after a long friendship. Gerard said it’s terrific to provide emotional backup for each other — not to mention bounce ideas for tricks off each other.

American ice dancer Madison Hubbell is engaged to Spanish ice dancer Adrian Diaz, and they competed against each other Saturday. Representing the United States in that event: Madison Chock and Evan Bates, who have been a couple for quite a while now.

Shiffrin and Kilde were brought together by their shared career, of course. They met at a ski camp in Chile more than a half-dozen years ago.

“Talked for five minutes or something,” Shiffrin recalled. “But I was, of course, watching him ski, thinking, ‘Wow, he’s got some powerful turns.’ And we were just dropping off our skis after training one day and had some conversation and I thought, ‘Wow, he’s really nice and easy to talk to as well.’”

What began as a friendship eventually became something more — but only after, Shiffrin said, she was chided playfully by Kilde for not picking up on his should-we-have-dinner cues: “He was like, ‘Oh, you’re bad at flirting.’”

After seeing Shiffrin finish a race for the first time in Beijing, arriving ninth in Friday’s super-G, Kilde spoke about being “really, really happy” for her and the way she was able to get “up on the horse again.”